There’s no masking how this has been a volatile, indigestion-inducing year for investors. Our readers know our current thesis calls for volatile, range-bound trading, which is a continuation of 2022’s established pattern.

There have been five major selloffs this year, which then gained upward steam before eventually settling back down. Our friends at MAPsignals produced a great chart highlighting those five events: 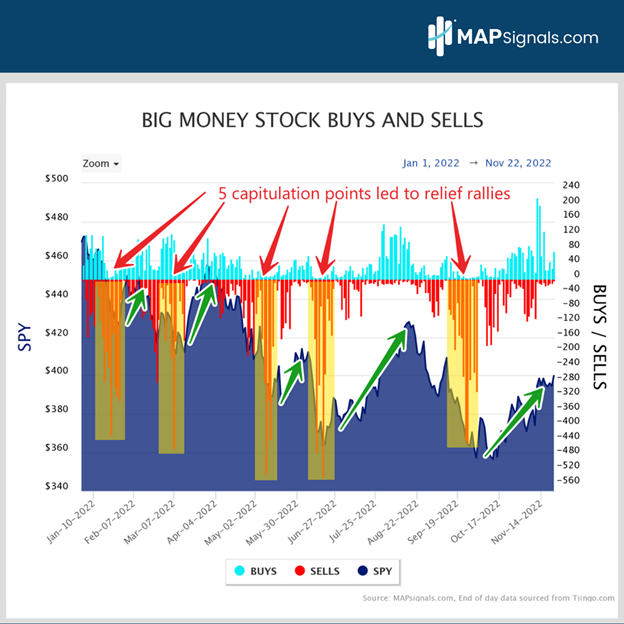 We’re in another relief rally now. From a historical perspective, this is understandable. People are generally focused on other things like family and the holidays, allowing for a Santa Claus Rally. This current one began on Oct. 12, and the S&P 500 has gained 12.8% since, as of this writing.

That rise corresponds with the upswing in MAPsignals’ Big Money Index (BMI), which measures “big money” investor activity via a 25-day moving average. The BMI has leaped 43.6% from Oct. 24 until this writing, as highlighted by the yellow box: 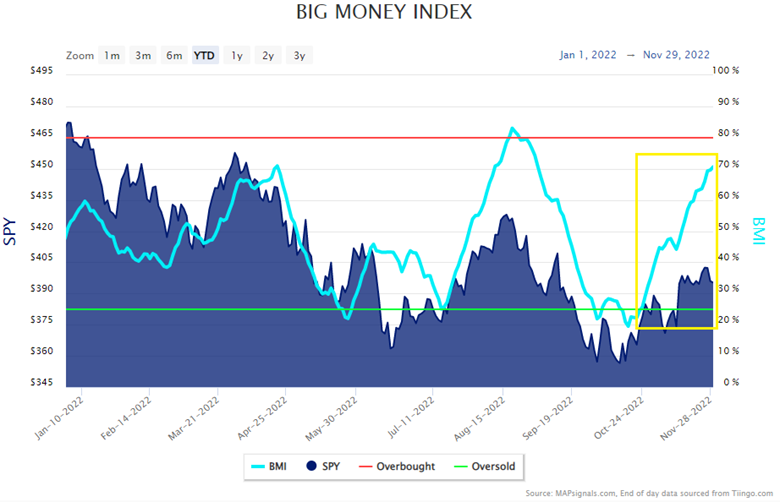 At the most basic level, we can see how underlying data supports the bounce. There’s been a big lift in buying while selling has basically dissipated: 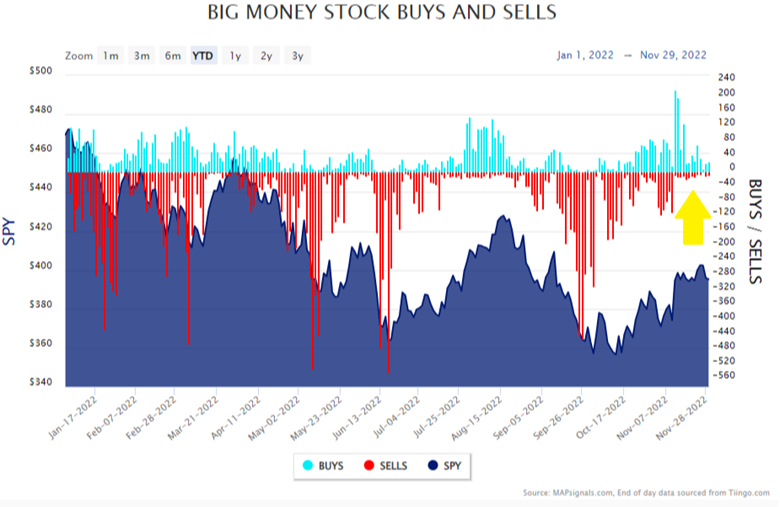 What’s quite interesting is small- and mid-cap stocks have dominated the buying: 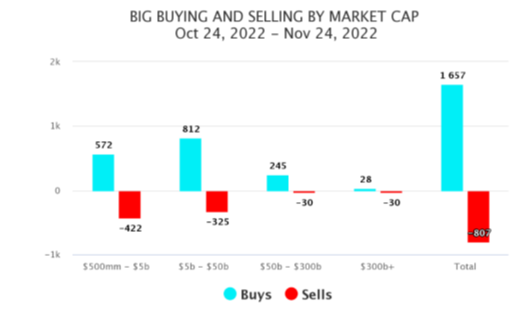 To us at CFS, this means the “big money” investors are hunting for quality companies with beaten down prices. In other words, they’re buying stocks low in the hopes there will be big future jumps in a search for value.

Looking at sectors, we noticed another difference from prior market runups. That is, while relative sector strength is still skewed to favor energy, there’s been a broader fundamental and technical uptick in all sectors (especially technology and discretionary) this time than compared to the four past rallies: 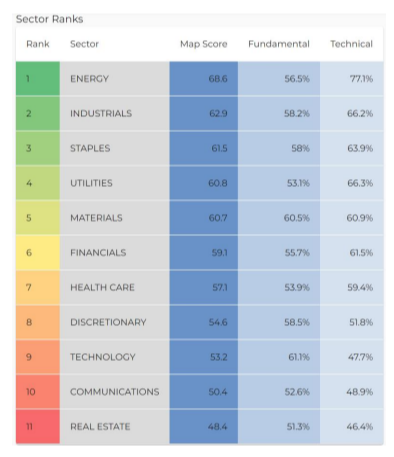 These movements are encouraging because this broader strong uptrend is reflected in prices and buying volumes in many pockets of the market. In past runups, energy and health care almost exclusively led the way. Now, we’re seeing more positive participation from every sector.

This broader strength furthers our confidence in our original thesis, which is that while we'll continue in this volatile trading range, we should be able to break out of it sometime in the second half of next year. What about interest rates? We think the Federal Reserve is probably closer to the end of its tightening cycle than the beginning and this belief has been reflected in the recent decrease in the 10-Year Treasury Rate.

Consumer Spending Up, but so are Credit Card Balances

Shifting gears a bit, let’s talk about the economy. The U.S. is a consumer driven economy. In general, as the U.S. consumer goes, so goes the U.S. economy.

Well, some interesting consumer economic data came out around holiday shopping that bodes well for the economy at large. But we want to deconstruct it a bit to show how the strength consumers are showing may be built upon a shaky foundation. 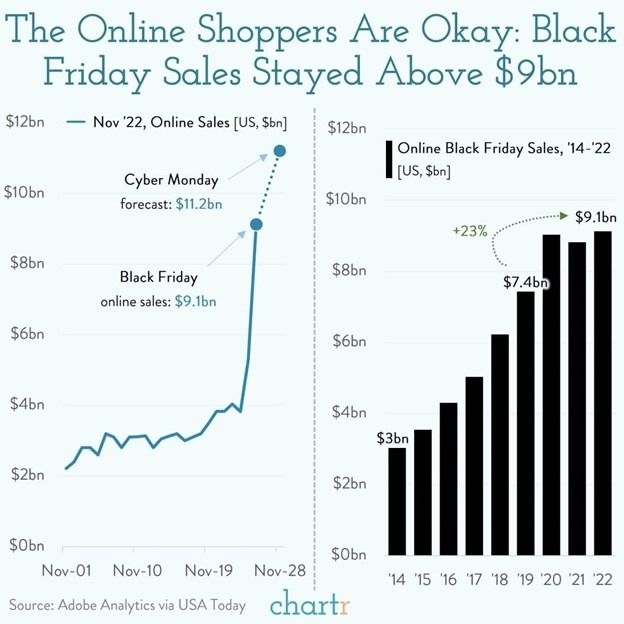 Notice the trend since 2019 (i.e., before COVID-19). There’s been a massive jump in online Black Friday shopping since 2019. This appears to be a sticky trend that will continue into the future.

While on the surface this is great, there are some economic risks lying below. It seems nobody told the Black Friday shoppers we may be heading into a recession somewhat soon. Perhaps the typical consumer is still on a sugar high from too much money being dumped into the system.

Regardless, the fact remains that we still don’t know the full effects of the Fed’s rapid interest rate hikes yet. These moves take about 12-18 months to work their way through the economy. And the potential ripple effect is big.

We’ve discussed housing and mortgages. The Fed’s rate hikes have driven housing affordability downward as the average 30-year mortgage rate has more than doubled in 2022. So, the real estate market is clearly cooling.

But our opinion is that, even with a cooling real estate market, what could hurt the economy is runaway consumer spending fueled by debt. While the record Black Friday spending total was big, the Cyber Monday haul was even bigger. Consumers spent $11.3 billion that day.

Given these huge figures, we have to wonder what’s funding these purchases (i.e., cash or credit?). Based on data from earlier this year, we know the answer and it isn’t good – American have taken on a larger proportion of consumer debt: 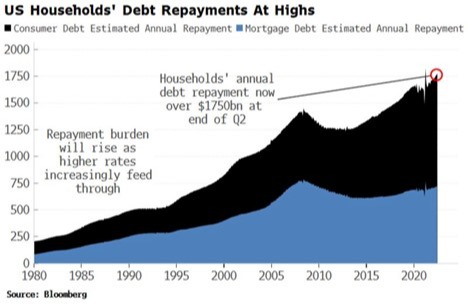 We’re seeing this consumer reliance on debt affect personal savings too. The rate of savings is plummeting while the use of credit cards is skyrocketing:

Some people don’t like the chart above because the savings rate is a percentage of total income while the debt level readings reflect rates of change. Technicalities aside, the underlying story doesn’t change, in our opinion: personal savings are being eroded while credit card balances grow.

What’s not being talked about enough is the use of “buy now, pay later” (BNPL) programs, even as credit card balances increase. These programs allow consumers to purchase now, then pay in installments over time. This activity isn’t captured in this analysis (or consumer credit reports), but Adobe Analytics identified a 78% jump in orders being made with BNPL methods from Nov. 19-25. We think BNPL could be a ticking timebomb.

Why point all this out? Because even though we're seeing possible momentum in the markets, it’s important to understand the risk from a consumer standpoint, which will be reflected in the economy eventually.

Based on the information in this post, we believe demand will be negatively impacted at some point. Consumer debt could get out of control. If so, spending behavior will almost certainly adjust as savings dwindle.

Just as compound interest works wonderfully on the upside, it is an absolute menace on the downside.

The S&P 500 is an unmanaged index of 500 widely held stocks that is generally considered representative of the U.S. stock market.   Past performance is not a guarantee of future results. Investing involves risk and investors may incur a profit or a loss.