Fed’s Expectations vs. Reality, and What it Means for Markets

With the Federal Reserve’s most recent minutes out and the dust having settled from Fed Chair Jerome Powell's press conference, we think it's important to touch on what it all means. We especially want to focus on expectations and reality going forward.

For instance, look at the variance between the green line and white line on the below chart. The white line is the latest value of federal funds rates futures. The green line is the Fed’s median expectation for its target interest rate (the federal funds rate). The expectation was lower rates over time. The new reality is we may be looking at higher interest rates for longer than previously anticipated: 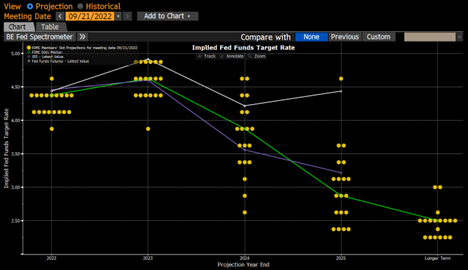 This big variance is a result of fine-toothed combing over Chair Powell’s every written and spoken word to detect any hint of difference between a hawkish and dovish tone in his statements. We saw a new phrase introduced – “cumulative tightening” – which is Fed-speak for recognizing the historically rapid pace of interest rate hikes (see far right below) within the context of the hikes’ total effects, rather than the net change on a meeting-by-meeting basis: 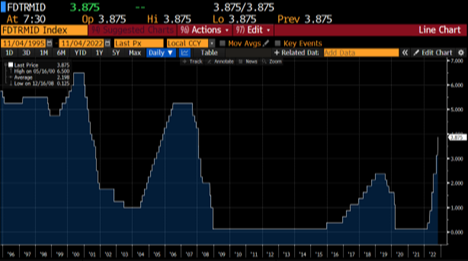 Still, considering the overall tone of the written statement was more dovish than expected, you would think the press conference would convey the same. Well, unfortunately Powell took a pin to that balloon, almost as if he was upset the market shot upwards after releasing the written minutes. Consider the following quotes:

The takeaway to us at CFS is that only slowing increases are on the near term horizon, not any pauses, according to the great wisdom of Jerome Powell. Unfortunately, data released after the verbal bombs likely won't encourage Chairman Powell to change his mind. It’s probable the stronger than anticipated labor market will convince him there's no excuse to let up on rate hikes even though we had a surprisingly cooler than expected inflation reading last week : 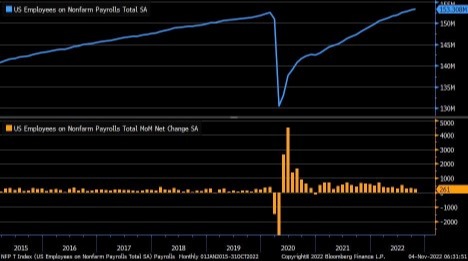 What Does This Mean for Stocks?

Well, it’s further information that reinforces our current thesis of range-bound trading being controlled by the bond market, thus showing which sectors you need to be allocated to through at least the first half of next year. We may not like the Fed Chairman’s words, but we can at least know how to prepare for the fallout.

Some sectors are nosediving while others rise, ignorant to the chaos around them. Those winners are almost like a dog needing to go to the bathroom and not caring if the tree it’s going on happens to be inside a hotel lobby.

That dog is getting his, regardless of what’s happening around him.

As we can see from the sector data provided by our friends at MAPsignals, energy, financials, health care, and industrials (on the left) are the happy dogs, while rate-sensitive tech stocks burn (on the right):

You can see this in the fairly evenly dispersed macro level picture in “big money” buying and selling from MAPsignals during the week of the Fed press conference: 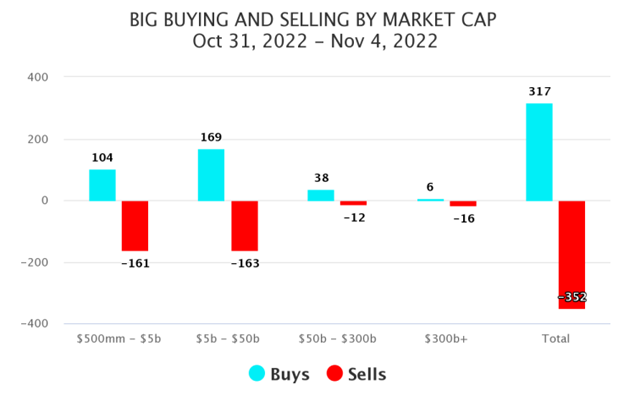 Fed Chair Powell’s statements were a splash of cold water on investors’ faces, even in the face of mass layoffs from the biggest tech companies. He said it’s premature to slow the pace of increases, as they’re needed to “combat inflation.”

This hawkish tone most directly affected rate-sensitive stocks (like tech), as represented in the Nasdaq tracking ETF QQQ, which lost 7.4% from Oct. 28-Nov. 4, while much of the rest of the stock market was seemingly undeterred. We know that because there weren’t unusual “big money” sell signals in the macro data or any big declines overall in MAPsignals’ trusty Big Money Index (BMI), a proxy for “big money” investor activity: 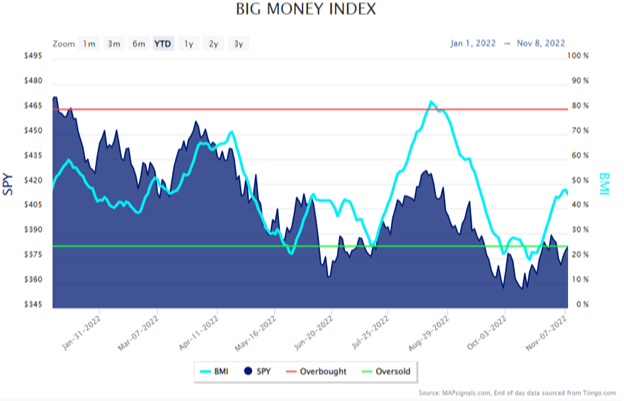 This is another piece of evidence showing how dread in some sectors (tech) is having no affect on the happy dogs described earlier (i.e., the current winning sectors). Not too surprisingly, much of the winners’ success can be attributed to stronger sales and earnings growth relative to other sectors.

Tech’s decline is noticeable and important because for years the biggest tech firms drove equities indexes higher. As that happened, more passive funds had to buy the giant tech stocks. It led to imbalance and the five largest tech stocks propping up the entire Nasdaq index last year: 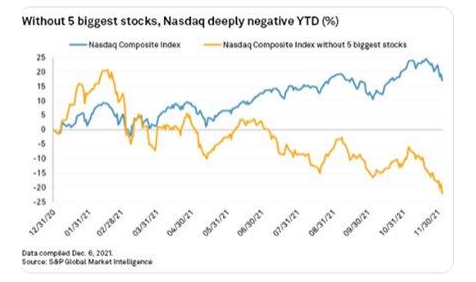 This likely produced a false sense of security among investors. We’re seeing it unravel this year. Passive indexers are realizing it as those funds are forced to sell an abnormal amount of the largest tech stocks.

In markets, when one asset rises, another often sinks. This phenomenon plays out over years, and we see it in the ebbs and flows of returns. Consider how not too long ago, energy stocks were downtrodden while tech flew high. The inverse is true now.

We've already seen energy double in weight in the S&P 500 and it’s continuing to rise. It could go much higher too. In fact, energy is among the clear group of sectors driving the market all year.

So, is our playbook still alive? In terms of successful sectors, yes. Given the Fed’s recent actions and words, we think the playbook will continue to do well, at least through the first half of next year. With help from our friends a MAPsignals, let’s discuss the leading sectors, along with supportive stocks we own within them.

Starting with energy, it’s been elevated all year. Still, at the end of October, energy’s estimated year-end price-to-earnings ratio was 8.64, which is still the lowest of the 11 sectors that comprise the S&P 500 (materials was next at 13.59). Buying in companies like Devon Energy Corporation (DVN) and Chevron Energy Corporation (CVX) have pushed markets up, and there may be more ahead:

Buying in industrials has supported the larger market and will continue to do so because of the Fed. Defense and agricultural/machinery names have done well, like Archer-Daniels-Midland (ADM) and Lockheed Martin Corporation (LMT):

Along those lines, heath insurers like UnitedHealth Group Incorporated (UNH) have sent the health care sector on an upward trajectory:

And as you can see in this final chart, the top 15 gainers so far this year in the S&P 500 index by subsectors reinforces all the sector buying metrics we just referenced: 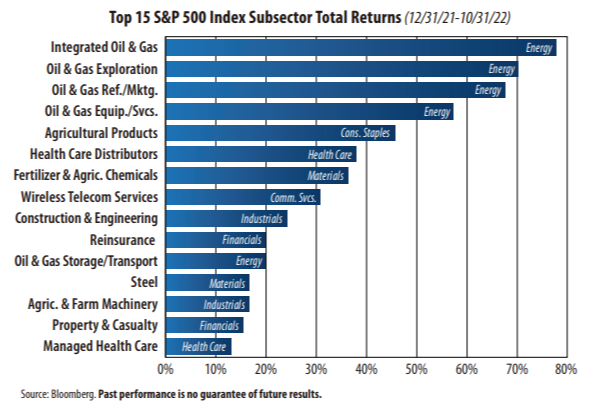 It’s clearly not time to pull the plug on the investment thesis that has been working all year. Recent events and hawkish behavior by the Fed only reinforce this thesis, more than likely giving it legs through at least the first half of next year.