Last week we went into how the market got to where it is today and what we expect going forward, especially in the in the near term. Obviously, we're all rooting for a full market come back sooner rather than later. And that seemed possible recently as MAPsignals’ trusty Big Money Index (BMI), which measures institutional investor activity, stabilized before briefly rising.

But since then, it’s dipped slightly, even though there was more “big money” buying than selling last week (231 buys vs. 149 sells): 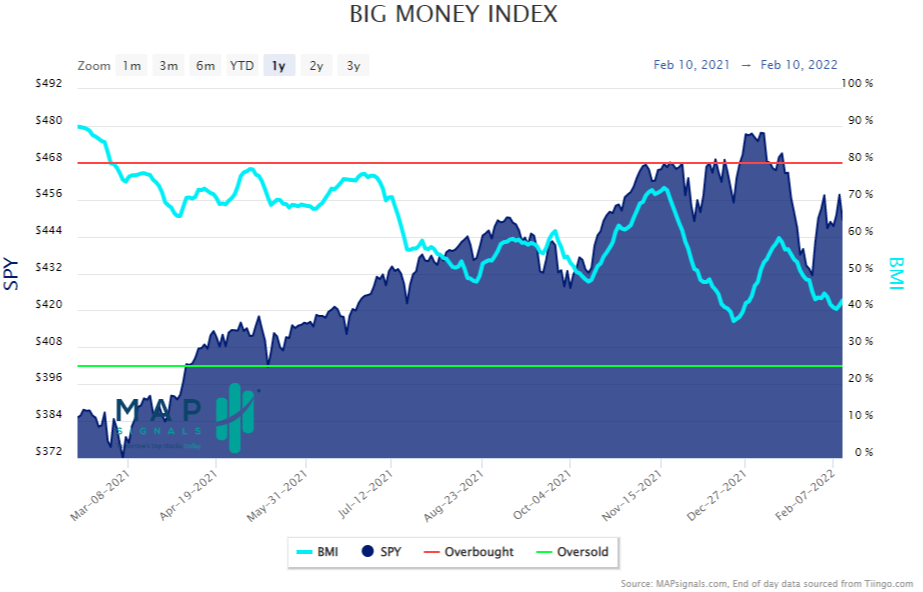 These happenings aren’t good or bad, but more so hopefully a sign of stabilization. Stepping back some, major indexes have largely leveled out and even risen (as of this writing), but the underlying data don’t point to stability quite yet.

That’s because there isn’t a huge uptick of buying recently: 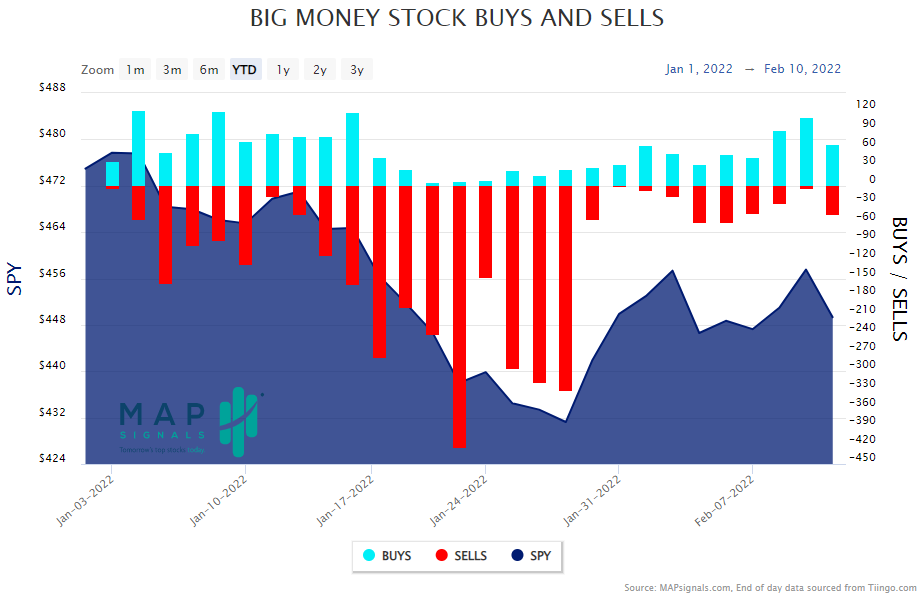 If inflation keeps rising as expected, (the Consumer Price Index is up 7.5% in a year, the most since 1982), new lows could come into play. But with all that being said, the overall situation is starting to come into focus as we prepare for the remainder of the year, and that’s definitely positive.

Remember, despite hearing constantly about rate increase – some are saying there will be seven (!) in 2022 – the Federal Reserve can't do too much too fast, or it risks recession. The easy money policies of the past years expanded the national debt to $30 trillion, which means every 0.25% rise in interest rates equates to $75 billion in interest payments.

So, while recently we spent most of our focus on the short term and how we got there, here’s what we think is a reasonable roadmap for the remainder of the year.

In the first quarter, assets sink due to hawkish talk from policymakers (it’s already happened and is continuing to happen). Later in the year, we think there will be more talk of “defeating COVID” as politicians alter course and everyday citizens continue the return to “normalcy,” which should calm markets.

Once that occurs, by late summer or so we think unemployment and labor markets will further normalize. Also, more normal economic activity around the “classics” of supply, demand, and prices should take place as well as in increase in spending in consumer services.

Late in the year, we think all these factors will combine to provide an environment where stocks can flourish, especially growth stocks. And all throughout the year, we think the Fed will raise interest rates three times in 2022, settling on a target rate around 1.0% (or slightly lower).

Now let’s turn our attention to investing while rates rise, since we know that will happen this year. Rising rates are no reason to panic because they simply create a rotating rally. We’ve already seen high quality growth stocks get battered due to rate worries while plenty of value stocks rose.

To illustrate this concept, our friends at MAPsignals did the work for us. These charts show “big money” buys and sells in 2022 by sector:

The theme is clear – technology, health care, and consumer discretionary stocks were sold hard. Why?

Investors pay up for tech stocks because their future profits and the expectation that they’ll increase quickly down the road. But when interest rates rise, those future earnings decrease in value.

Health care was punished mostly due to many such companies carrying higher debt levels due to financing research and development. Those costs will rise with interest rates.

That covers selling, but now let’s focus on where the buyers have been.

This is confirmed when we look at historical data. Energy and financials are considered cyclical, meaning they’re more sensitive to what the economy is doing. It's why they move in the same direction as interest rates 60% of the time. Comparatively, technology stocks tend to zig when interest rates zag, only moving with yields 10% of the time: 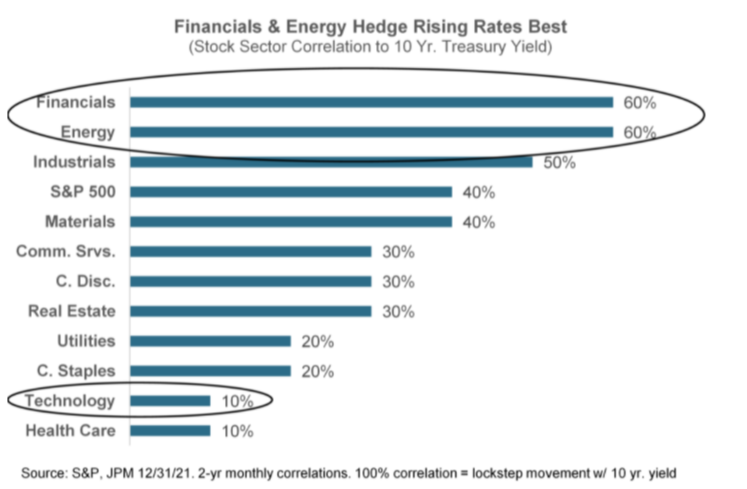 History says to bet on financials and energy in this environment and it’s proven to be correct once again. It’s why we at Cornerstone increased weighting in these sectors at the beginning of the fourth quarter last year.

The new year has meant a fresh playbook. But as always, it's important to stay diversified and not “panic sell” out of oversold, high quality growth stocks with strong cash flows. No matter the state of the markets, a diversified portfolio includes excellent growth assets in conjunction with high quality value stocks. The common thread is quality.