If you pay attention to the news, you’ve surely heard about “cracks in the economy,” hiring freezes, inflation, and more. So, things must be pretty bad. Well, don’t forget that negativity draws attention, and news organizations are paid via eyes and ears being drawn to them.

It’s made us wonder – are things really that bad when we look at the data?

We wanted more data going into earnings season. More information has now come out. It’s not like we’re getting “blow out” earnings news. But compared to what some people expected, which was basically a full-fledged meltdown, things look pretty good so far.

It’s as if investors have breathed a collective sigh of relief because it isn’t as bad as they thought. This is a good thing which has been reflected, as of this writing, by a continuing rise in MAPsignals’ trusty Big Money Index (BMI), which tracks “big money” investor activity: 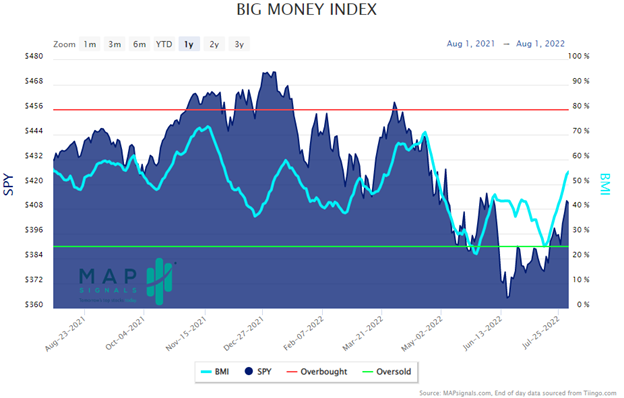 And last week we saw even more buyers emerge with 383 “big money” buys versus just 55 sells: 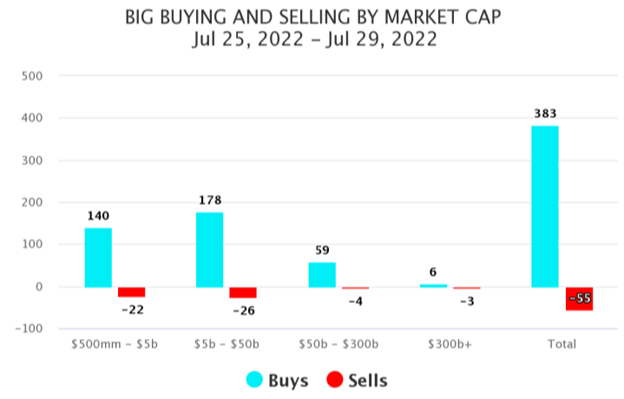 We’re seeing the buys reflected in MAPsignals’ sector rankings chart as well. Notable buying occurred in four sectors (even technology stocks are rising from the dead), and the buying overall was rather broad-based:

Peeling these layers back a bit, we wonder if the overbearing market news that makes us all generally miserable is behind the curve. Remember, markets look forward while news reports on what happened (past tense). It’s a possibility.

The last couple weeks we’ve been talking to clients a lot about the bounce off the second retest we've been experiencing. To understand this visually, see the chart below. The BMI went oversold on May 23. The NASDAQ Composite Index then rallied for a 9.5% gain. The market and BMI fell again to retest lows. The BMI hit oversold again on July 14, but has subsequently rallied 7.5% as of this writing: 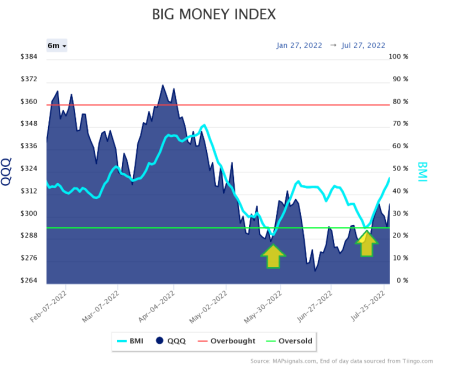 What’s interesting is that, while the market has been volatile, it’s been on a continued uptrend for a while now. We've even begun to see unusual big buying in stocks: 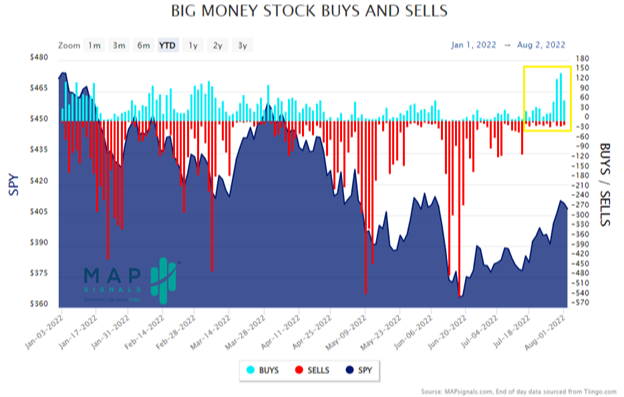 But it’s even more notable that within the last week or so, we've seen exchange-traded fund (ETF) buying pick back up after selling evaporated about three weeks ago: 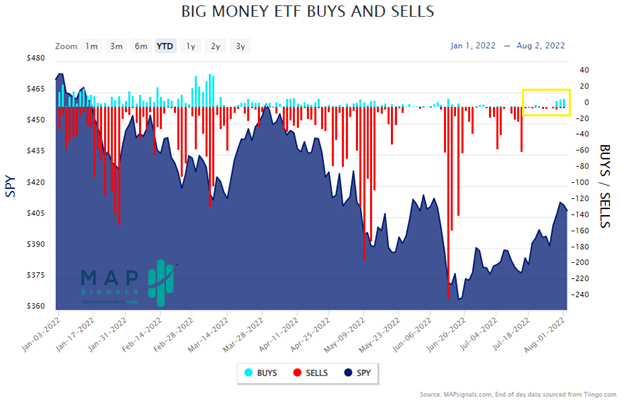 Those little blue lines on the right actually move the macro-level market quite a bit, so this ETF activity is reflective of what’s going on right now. And when did the buying pick up? After earnings announcements. Earnings drive the market – what a concept!

Investors are welcoming this change because it’s ushering in confidence and comfort, both of which have been in short supply this year. Another welcome change is investors scooping up stocks that have been beaten to a pulp, most importantly including technology stocks, which points to confidence.

That’s different than when the BMI hit oversold in May. The run up this time is broader, as the below chart shows. We haven’t seen technology so big in a while. Multiple sectors being bought on such large scales reflects earnings: 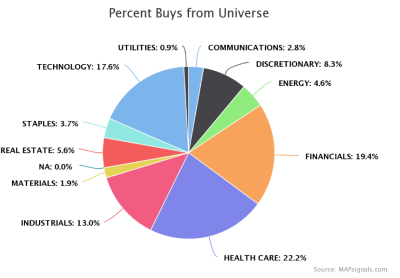 Speaking of technology, let’s dive a bit deeper into the mega-cap technology earnings released recently. As you’ll see, we didn’t really experience blowout earnings, but the results weren’t as bad as feared, which investors viewed as a win. Thus, we think there’s strong fundamental support for more growth.

Results were better than feared as everyone worried about a drastic slowdown. But Google proved resilient, especially in their ad business, even in a tough environment.

While not a beat, revenue is still up 16% in a year. The company’s intelligent cloud business (Azure), a high-growth segment, grew 25% in a year and generated $20.91 billion in revenue. These earnings were another “phew” moment for investors.

Earnings were somewhat weak, but not as bad as expected, especially given the company’s macro headwinds. Worries were high, but optimism remains that the company will work through its challenges.

Apple is somewhat of a bellwether for consumer spending habits and has also experienced some notable supply chain issues in China. Results aligned with expectations for the most part, but they were well ahead of analyst fears, which again brought more investor comfort. This was another case of not seeing a huge beat, but more of results easing fears.

These were perhaps the most interesting results due to the company’s tricky macro-level outlook from potential consumer spending slowdowns and supply chain troubles along with analysts having the most fears for Amazon relative to the other mega-cap tech firms. But there were (surprising) beats on EPS, revenue, and operating income.

We highlighted these five companies because all of them are heavily tied to the real economy and offer a significant look into the health of the overall market. The real data offered in these earnings reports are what enable more confidence for investors, and thus a stronger buying base.

Oddly enough, if this fundamental strength continues, then things may play out like we suggested at the beginning of the year regarding the “ghost tightening” that’s occurring. As we've always stated, revenue and earnings drive the market. And as you can see in the table below, overall year-over-year revenue and earnings estimates for the S&P 500 still have strength to them even though they have decreased due to earnings compression: 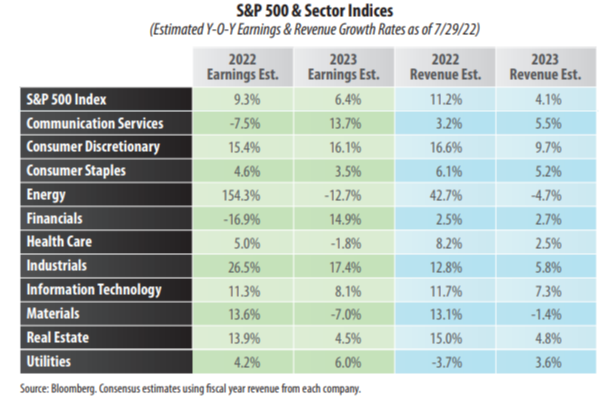 So, even with earnings compression, the actual results are not as bad as the news would have you think. A simple look under the hood of the market is beginning to show a much more promising story for the future than you’ll hear or read in the news media.