Last week the first estimate of second quarter gross domestic product (GDP) showed the economy is estimated to be contracting at an annualized rate of 0.9%. But no matter which way the initial estimate ends up in reality, it seems pretty clear to us that we’re not in a “real” recession.

It may feel bad, but data indicates otherwise. Thus, it feels like nothing makes sense.

We say that because, as of this writing, the blue chip economic gross domestic product (GDP) estimates within the Federal Reserve Bank of Atlanta’s GDP Now model are estimating second quarter economic growth of 1.3-2.6%. Conversely, the Atlanta Fed model predicts a decline of more than 1% in GDP: 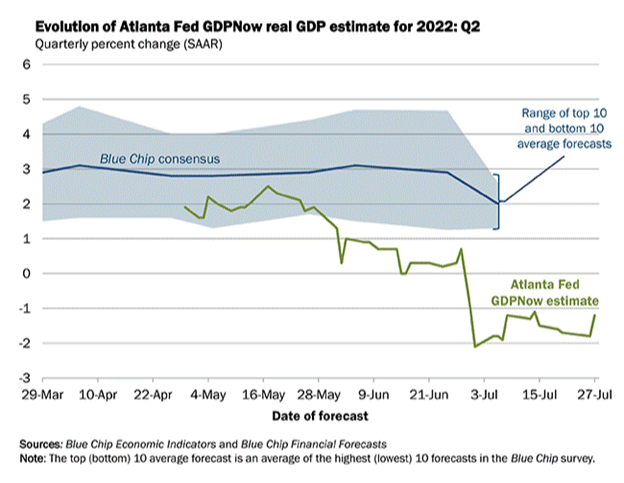 To confuse us even more, the economists over at First Trust, who historically have been fairly accurate, have a model saying we’ll see 0.5% annualized GDP real growth for the second quarter. We’ve never seen such variance among analysts. The wide range of estimates is more evidence that we don't know what's happening right now!

The bottom line though is that if we are in a recession, it's a weird one because we're still seeing rising corporate earnings as well as continued job growth. This was on full display as the media made a big deal about last week being the most important earnings week of this season. And lo and behold, last Tuesday (which was supposedly the biggest day of last week's earnings), we saw some of the biggest companies in the S&P 500 beat earnings, or at the very least put out good forward guidance.

We saw Microsoft pop in after-hours trading. Google did the same thing. Visa beat top and bottom-line estimates. Texas Instruments beat expectations and raised its forward guidance (a good indicator of semiconductor strength). Stryker had strong growth. Archer-Daniels-Midland had an amazing quarter. And even the high-end Louis Vuitton had solid results with growth across the board.

This exemplifies the forward-looking nature of the market and how important this earnings season is proving to be. There have been some misses, but they haven’t been as punitive as people feared. Positive future guidance has been a big lift. Also keep in mind that almost every stock mentioned above is a dividend growth stock, which have shown the ability to weather storms.

All in all, it seems to us as if investors are starting to feel a bit more comfortable.

In all fairness to the Atlanta Fed, some of last week’s statistical releases do indicate an economic slowdown. But they show slowing at a glacial pace, nothing like the serious and rapid contractions in 2008-09 or 2020. Economic data trends are starting to display a more normal cyclical downturn, not a panic-stricken financial crisis like the destruction we all remember from 2008-09.

As some of the economic headlines seem anything but reassuring, why have stocks continued to rise recently? Well, historically a big drop in stock prices typically precedes a tsunami of bearish data (i.e., what we're seeing now), followed by a rally where forward-looking market data and headlines turn positive again.

So, let’s review a few examples of recent price action versus headlines.

Housing market conditions are bearish, per the news. But shares of the SPDR S&P Homebuilders ETF (XHB) rallied 21% off their June lows.

We hear about how job market growth isn’t that good and about to hit a pause. Yet, shares of payroll company ADP are up 10% from June lows.

The semiconductor business (one of the best indicators of a cyclical economy) is supposedly in bad shape, according to the headlines. However, the VanEck Semiconductor ETF (SMH) is 19% higher than its low on July 2, 2022.

And these are just a few examples.

The most logical explanation is it’s beginning to appear that investor sentiment bottomed out near the end of June. Looking at the chart below, while the sentiment numbers are still below historical averages, this noted contrarian indicator has begun to climb off extreme bearishness from July 6, when it was at 52.8%: 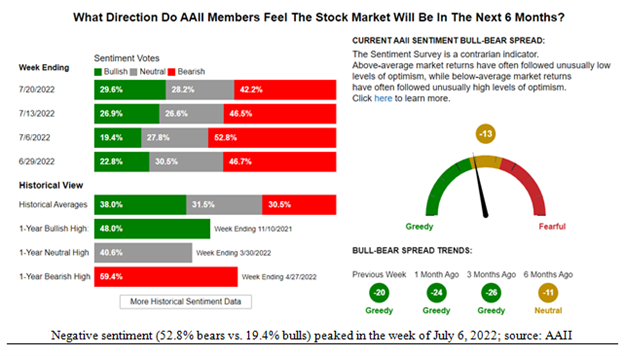 Interestingly, this is the same week that the CBOE volatility index (VIX) was much higher (35.0) than where it sits as of this writing (23.0).

While the contrarian indicators are starting to turn positive, let's move our attention to the elephant in the room – inflation. It's starting to look like maybe the Federal Reserve will get its wish and see the rate of inflation decline sharply in the second half of the year. The chart below shows the CRB Index, which measures prices of 17 global commodities. It’s already fallen 14.8% from its early June high: 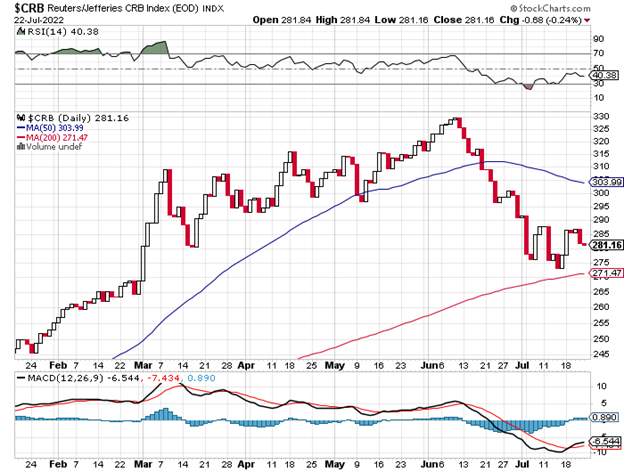 The current trend is positive because it means other price declines will likely follow.

Lastly, in perhaps an even more telling sign of what may come, Treasury yields have plunged in reaction to the recent economic data. Yields closed the most recent week around 2.7%, well below the 3.5% peak in early June:

Again, this is a positive trend.

We think a strong reason for these recent trends is that one thing keeps showing up from the leading companies that have reported their numbers thus far in earnings – demand is healthy. Of course, that’s another positive. So, while some economic growth is slowing, an aggressive recession is looking less likely.

Let’s now focus on MAPsignals’ trusty Big Money Index (BMI), which is a 25-day moving average of “big money” activity from pension funds, institutional investors, and so on. Does the BMI also have positive trend information to add to the growing list of positivity? Well, the BMI continued to bounce upward after it hit oversold on July 14, so it’s also sporting a positive trend: 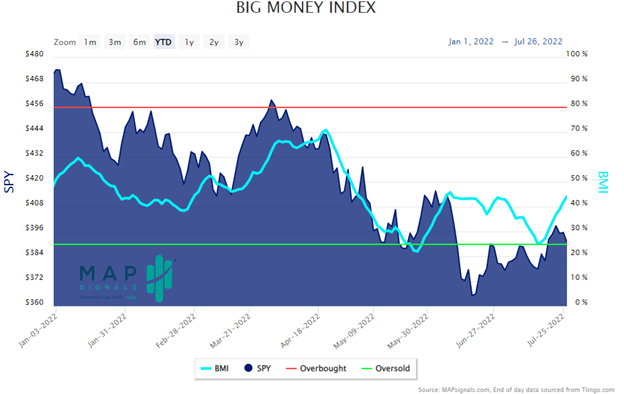 Another positive development is more buyers than sellers last week, although these are just nibbles from buyers, not big bites: 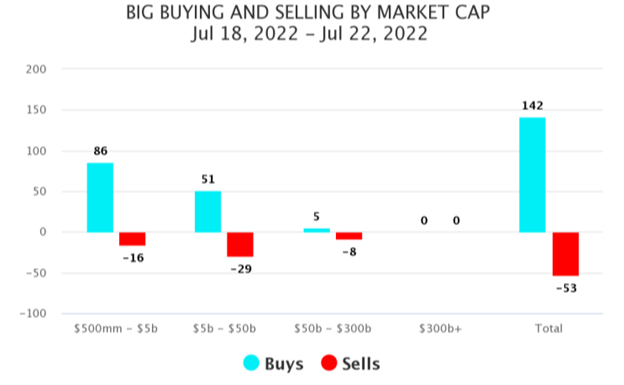 This is another trend in the right direction. Things could change on a dime, of course. But the trend looks good right now.

Sector rankings show positivity too, as selling has basically evaporated as buyers nibbled on all sectors, taking big bites into health care:

Does that mean that “ghost tightening” is working? It seems so.

Remember, we've been talking all year about this theory of the Fed telegraphing scary language and letting the market do the heavy lifting. Keep in mind, we have $30+ trillion in national debt that would be subject to higher interest rates. Thus, the Fed can’t raise them too high.

In essence, the necessities like food and gas are doing the “ghost tightening” heavy lifting. But after the Fed raises rates a couple more times and then stops, we anticipate that we'll be at a point where we should have continuing solid data of slowing inflation and energy prices at the end of the year.

We believe the improving economic data that we're starting to see now will continue through the rest of the year, thus supporting stocks. Is it possible the market and investors are beginning to agree with us based on the trends?

Well, let's reflect for a moment. Remember that the BMI going oversold is a powerful bullish indicator historically. This year, it happened twice (May 24 and July 14). 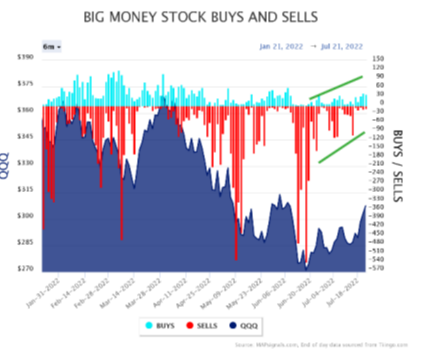 Look at that, another positive trend.

So yes, so far it is small buyers stepping in. But what we think it’s interesting looking at what they're buying. Recently, it’s been technology and discretionary stocks, which have been the most beaten up: 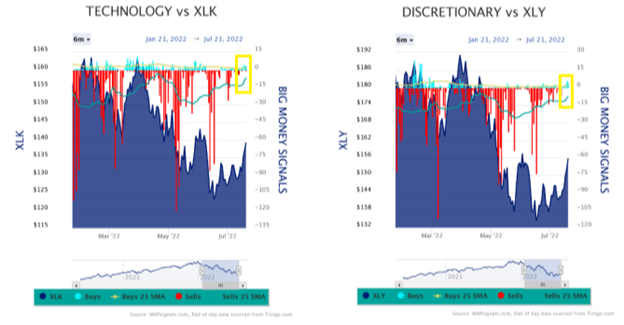 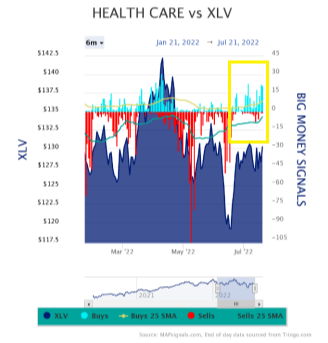 Taking a step back, this is almost a perfect example of a barbell approach of growth and defense, using technology and discretionary for growth, and health care for defense. If so, this would be a step towards historical normalcy that everyone should welcome!

While news rhetoric is as loud as ever, the trends are starting to show that the market is once again looking forward and investors are starting to catch on that there's some light at the end of the tunnel. So, as we said last week, step back, don't stress, and enjoy your summer.

Most importantly, remember these positive trends are cyclical. Those who know their history are aware that returns coming out of cyclical bear trends are nothing short of astounding. The average 12-month return for the S&P 500 is 44%, and the average 18-month return is 59%: 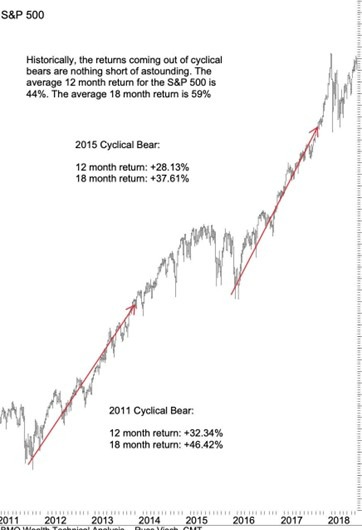