Who’s Got it Better Than the U.S.? Nobody.

The Harbaugh family is famous in coaching circles, having produced multiple head football coaches. They’re also famous for the saying –  “Who’s got it better than us? Nobody.”

The quote speaks to the “appreciate what you have” mantra the family was built on.

It made me think. In the world of economics, if you look around the globe, you quickly see nobody has it better than us here in the U.S. And we should appreciate what we have.

There is No Comparison

The fact is, when you compare overseas investment options and their fundamentals to U.S. counterparts, there isn’t really a comparison. The most comfortable place is still here in the U.S.

Can you trust Chinese statistics? Are they reliable, given that it’s a communist country? We’re not even sure their accounting procedures are accurate, much less if the government sways businesses and numbers or not. What about their huge debt – can their banks absorb it?

Europe has been a no-growth zone with negative yields. That’s due in part to a significantly aging populace that’s supported by a welfare state that has few young workers to support it. 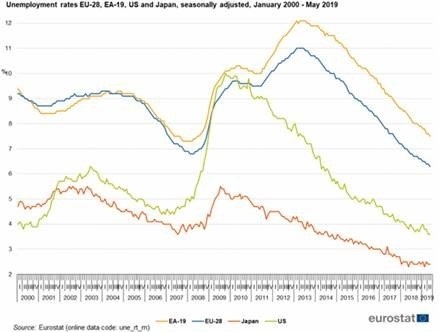 For instance, in Norway, one of the “healthiest, strongest” European countries, there are active disability claims for 11-25 percent of the population aged 30-55.

With so many not working, how can a welfare state be funded? Yes, there are disability claims in the U.S. But it’s not a quarter of the prime working population.

Additionally, unemployment numbers around the globe are worse than in the U.S. While the trend is encouraging, this Eurostat chart shows the unemployment disparity is quite large.

Rates in Europe are generally twice as high as in the U.S., even among the strongest European economies. It’s tough to support a society with so many people not working.

The Bears and the Bulls

Remember, in the U.S. the S&P 500 is returning about 0.5 percent more in yield than a 10-year Treasury bond. So from a business perspective, the earnings slowdown is behind us. Plus, a third quarter uptick is expected to bring in double-digit growth next year.

Beyond that, profit margins are strong, while corporate tax rates remain low. Economic growth remains healthy, and even in the ongoing global trade talks, the U.S. holds the upper hand.

Because of all this, the U.S. is the best place to put money.

That is a bullish sentiment. But I believe it holds true.

Many “bear” advisors sell tons of books. Many are sold to day traders and speculators.

But these folks would be wise to instead heed Mark Twain’s words:

“October: This is one of the peculiarly dangerous months to speculate in stocks in. The others are July, January, September, April, November, May, March, June, December, August and February.”

In all seriousness, over time, the bulls make money, especially if they play the long game.

Yes, the market can decrease. However, over the long-term, it pays better to not be a bear – or put another way – to appreciate what you have right here at home.