If you’ve been around any financial news lately, you’ve heard about the inverted yield curve.

Most of the headlines say we need to worry, that the end is near, and recession is imminent.

At Cornerstone, we don’t see it that way. From our perspective, which is rooted in data, things in the U.S. are still looking great.

Comparatively, the rest of the world isn’t performing as well.

Germany recently went into a recession. There is a global growth slowdown that is causing China’s economy to slow. South America is still a mess after Argentina’s stock market experienced a one-day drop of 48 percent last month.

All that and more make global investors realize the U.S. is the only oasis, which is evidenced by the capital flight out of Europe.

The yield curve is a data point worth considering, but headlines and news stories insinuating that all inversions precede every recession are disingenuous at best, and outright lies at worst.

In other words, these curves flip more often than most people realize. And they don’t all result in recessions. A yield curve inversion doesn’t directly cause a recession.

But as we all know, statistics can be fit to a narrative.

What really matters with yield curve data and recessions is context. Each recession is unique.

The curve inversion in 2005 that preceded the 2007 recession was different than the 2019 inversion. Back then, there was a leveraged debt bomb waiting to explode in the home real estate market. Defaults soared above expectations and the housing market collapsed.

What so what really caused that recession? Was it the yield curve or the systematic collapse of the real estate market?

Today, we don’t have any major leveraged bombs waiting to explode. Of course, risks exist – let’s not forget the national debt, which really could cause a recession if not managed.

But again, U.S. earnings are great, taxes are low, and profits are high. While there’s clear international risk, there is already a rush on U.S. equities that should continue, particularly on domestic small caps with little global exposure.

In addition, the fact remains that bond interest rates are taxed as ordinary income, while dividends are taxed at the lower long-term capital gains rate. For high-income investors, holding stocks delivers a 62-percent higher yield profit:

That 62-percent advantage is historically bullish. Even if a recession comes, the market over time tends to peak 18-24 months after that time period. 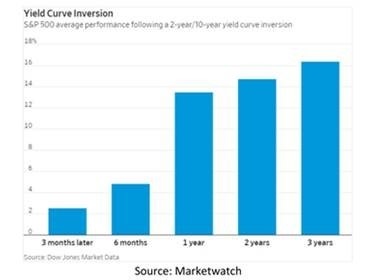 And as this chart shows, stocks perform well after yield curve inversions. It holds true from three-months to three years later.

Based on that, the link between yield curve inversions and recessions seems weaker, wouldn’t you say? Keep this in mind when others are sounding curve inversion alarms.