Our Debt Could Be Deadly

Normally I’m very positive in everything I talk about, and that’s primarily because there’s so much good to discuss.

Truth be told, the business background couldn’t be any better than it is today.

And I’ve consistently talked about all these positive aspects of the market and the U.S. economy, while imploring you to drown out the noise and focus on what’s really going on.

I’m not so maligned that we don’t pay attention to risks. So, when something is running amok, I’m going to call it out.

And right now, the biggest true risk to our economy is our rapidly growing federal debt. The debt could be characterized as a huge, quiet crisis that could wreck the U.S. economic machine.

Spending is the Common Thread

When the current administration took office, the federal debt stood at $19.9 trillion. Part of the winning campaign platform was railing against the outgoing administration’s spending. 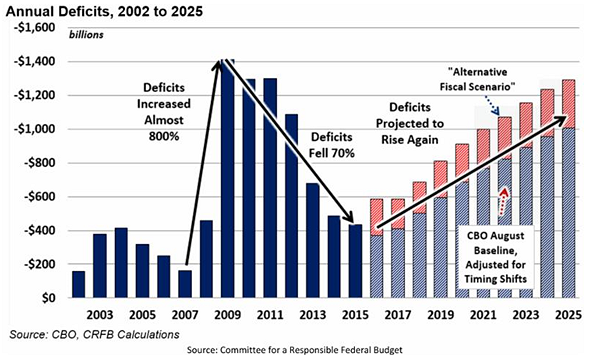 And now, Congress wants to spend more, while Democratic presidential candidates are campaigning on big, costly promises. From free college, to loan forgiveness, to health care for all – all of it would be paid for with higher taxes, sooner or later. In other words, the future isn’t too bright when it comes to government spending.

Somewhat comically, we’re not hearing about the deficit from candidates (and only very few journalists), when it was a main point of the last two election cycles.

Work Our Way Through It?

Now, some will argue that we can count on economic growth and spending cuts to bring in tax revenues that will outpace spending, as in the past.

But when that plan was successful previously, we had lower debts, a more disciplined Congress controlling the purse strings, and larger growth rates.

Today, the Committee for a Responsible Federal Budget calculates that it will take a 4.8 percent annual growth rate over the next decade to balance the budget through higher economic growth.

That seems highly unlikely (and that’s putting it kindly). In fact, it’s eerily reminiscent of pension plans counting on double-digit returns to fund their obligations – a long shot at best.

Others argue we can print money to fund the deficit, as we have with past war efforts.

But those were under a unified nation. We’ve been at war for quite some time, and we’re also more divided than seemingly ever before. How could we possibly argue realistically over which personal needs to fund?

In short, I’m not sure we can work through the debt without serious changes.

And that’s something to take seriously. Not the headline news. Not the latest “crisis.” But something that matters.

Unsustainable debt has been the consistent variable in every great civilization’s demise. That’s why I think our current federal debt is the greatest true risk to our economic expansion.