What “Should Be” Differs from Real Data

This week we again look at the current paths of Main Street and Wall Street.

In general, progress appears to be taking hold. Still, we’re in early days. But we like what we see thus far, and given what’s happened over the past few months, all good news is welcome.

There is growing evidence the economy hit bottom in May.

But it’s wise to be cautious, as the evidence isn’t definitive or indisputable, and it’s subject to change at any time. Plus, even if we’ve bottomed-out, the steepness of the decline means production in June may still be lower than in May.

What caught our attention most was this critical piece of recent economic news – regular continuing unemployment claims declined by 3.86 million, which is faster than expected. As we pointed out last week, recessions usually end sometime between the peak of initial unemployment claims (which was late March) and the peak in continuing claims (which looks to be Mid-May). (May Jobs Report Surprise!)

Despite all our current hurdles, the “green shoots” continue in our high frequency data tracking (chart below is as of last Thursday). 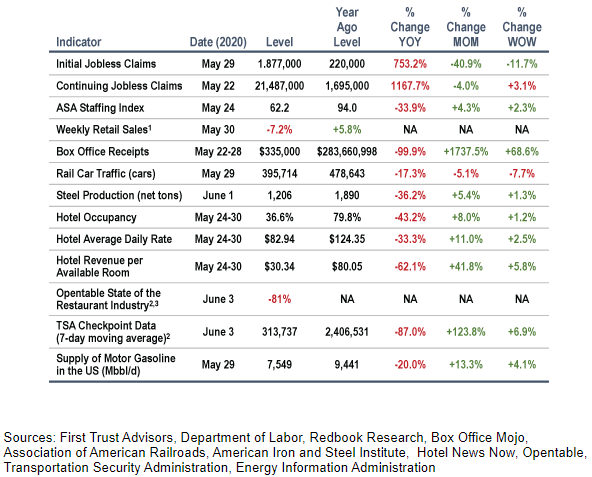 On May 30, nearly 269,000 passengers went through airport security checkpoints, which is up 39 percent from two weeks prior and up 180 percent since April 11. Similarly, motor vehicle gas sales increased 24 percent from a month ago.

Yes, the numbers are down substantially year-over-year. But the economic recovery must start somewhere.

So, we’re seeing economic signals closing in on the market signals, which is good. And in the weeks ahead, governments will have difficulty enforcing stricter lockdowns than people will voluntarily observe, meaning the recovery will likely continue.

Local pent up demand is suddenly exploding in areas that opened up, and this “coming out” is quickly translating nationally. At the very least, such strong economic activity should deliver additional upticks in the market. We’re somewhat seeing that now.

For instance, as we’ve discussed several times, big stock buying is back in full force. Out of 569 signals last week, 568 were buys – yes, only one sell signal last week. The five-day stock signal average since 2012 is 548, so we’re back to average signal counts.

Buying is also broadening, including strong purchase percentages in what were previously weak sectors, like industrials, materials, consumer discretionary, and financials:

Additionally, late last week the Russell 2000 Index did its annual reconstitution (rebalance), which should drive more market activity in the near future.

But there’s one thing happening that many people aren’t talking about – significant buying of exchange traded funds (ETFs). In the shortened trading week following Memorial Day, there were 116 total ETF signals, all but 10 of which were buys.

For perspective, since March 23 there have only been 55 ETF signals total, or 1.15 per day. Last week there were 29 signals per day, which is a 25-fold increase in average activity. Additionally, the 10-year average of ETF signals is 12.06 per day. 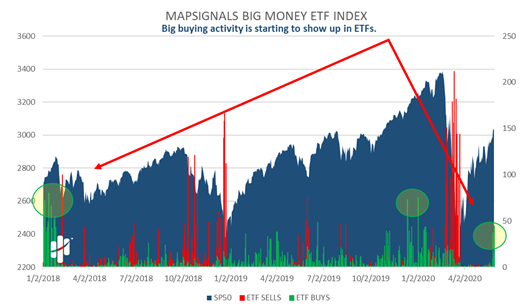 We’ve said this overbought market is less about FOMO (fear of missing out) and more about technical indicators.

That was because there wasn’t much trading in ETFs. But now the big money is here, in the form of Uncle Sam – the biggest buyer out there. Big stock buying is also ramping up. At the time of this writing, May 27 was the biggest buying day of 2020.

So, we’re still overbought, and as of this post, the period is 19 trading days long. These situations can persist – the longest period lasted 68 trading days.

While the market rockets up in the face of a significant series of bad news and people thinking the market should “go down,” the data tell a different story. They suggest it’s still going up. And while that may be confusing, it shouldn’t cause inaction.