The Ongoing Tale of Bitcoin and the Bull Run

Recently we’ve written a lot about MAPsignals’ Big Money Index (BMI), which tracks institutional investing, and how it shows the market is overbought. Such a situation implies a downward correction is due, and we don’t disagree because ups and downs are natural in healthy markets. However, many have taken liberty to call this current situation a bubble, and we do not agree with that assessment. In fact, Cornerstone is bullish on the intermediate term (i.e., the rest of 2021).

Ever since the market bottomed out in 2009 during the financial crisis, people have come up with reasons why the subsequent bull market would end. Of course, there have been many predictions – everything from Brexit to too much quantitative easing to excessive debt, and so forth. But our readers and clients know we prefer to focus on valuations, which have continually suggested the bull market would roll on. Over time, that math wins.

After the recovery in stocks from the 2020 COVID-19-related lockdowns, many “analysts” have deemed the U.S. stock market to be an overpriced bubble, ready to burst. Many have drawn comparisons to markets circa March 2000. They said social media firestorms that shot small stocks and commodities to astronomical levels are evidence of a building bubble.

But based on valuations, a bubble is not here…not yet anyway.

We need to keep in mind these huge price jumps are happening on a tiny sliver of overall investable assets. This signals more of a change in some investor behavior than a sign of serious fundamental issues. As such, we still believe the bull market in the intermediate term has further to run, and therefore reaffirm our year-end projection for the S&P 500 of around 4,200.

Consider as support for this position the fact that the Federal Reserve has the U.S. economy awash in liquidity, with the M2 measure of money supply up 25 percent from a year ago. Plus, that big jump doesn’t include another large fiscal stimulus package winding its way through Congress that will likely hit President Biden’s desk in short order. Additionally, vaccines for COVID-19 continue to roll out while cases, hospitalizations, and deaths are now falling fairly rapidly.

All of this is reason to believe 2021 would be a hard year to be out of the market when looked at in totality. Yes, we still believe tax rates are likely to rise, but not this year. Have you noticed how few politicians are talking about taxes right now?

In short, we are still bullish.

Profits are headed up and they have much further to go, as we’ve seen this earnings season. Plus, interest rates would need to head substantially higher to make our capital profits model turn bearish. Yes, the 10-year Treasury yield recently hit 1.3 percent (below), but it would have to go to at least 2 percent or greater before it would be a major headwind for equities.

So, the market is overbought now, but still undervalued overall when looking beyond the short term. Fed policies will continue to be easy. More stimulus will boost the economy. And COVID-19 data is continually becoming more positive. While we would never say that anything is for certain, or that a short-term correction won’t happen, the stock market doesn’t appear to be near bubble territory yet.

Bitcoin mania has taken over and we’re fielding an influx of client questions about it again. So, we’d like to discuss it in this post, but not the dramatic run-up, which has been massive: 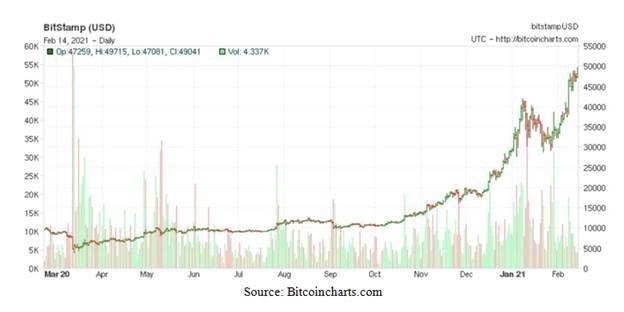 Instead, we want to highlight a potentially serious risk with Bitcoin that isn’t talked about enough – government. People may say we’re overblowing governmental risk, but we counter with the fact that India is currently preparing to ban Bitcoin. Additionally, China already made it impossible for the largest Bitcoin exchange to operate in China, which is why it moved to Malta.

Well, new Secretary of the Treasury Janet Yellen is no fan of cryptocurrencies and has called for more regulation of Bitcoin. We believe the underlying reason for more regulation is cryptocurrencies can undermine the federal government’s ability to control monetary policy and taxation. So, the U.S. may do what India is doing to close off any ability to circumvent the Fed or the Treasury, which is what Bitcoin currently allows.

What if the U.S. government doesn’t permit any new Bitcoin buyers? After all, it could go a similar route as the Indian government and strike a legislative blow to cryptocurrency markets.

Well, if that happens, it could amount to a direct conflict between free markets and governments. In other words, another “David and Goliath” battle may be afoot, meaning this could be the second coming of GameStop madness.

As of the original writing of this post we had not planned on including an update of our trusty BMI as the data had not substantially changed.  Well at the end of last week there was a reversal in buying data that behooved us to add an update at the last minute.  This somewhat feels a bit like the game we all played as a kid called Red Light, Green Light.  But with a recent slowing in buying we’d argue it’s closer to Yellow Light as the green light is flickering.

As you can see below, after the dip in the BMI that we wrote about two weeks ago, when the market sagged for 3 days, buyers came back but not enough for the BMI to match its prior high before leveling off again recently: 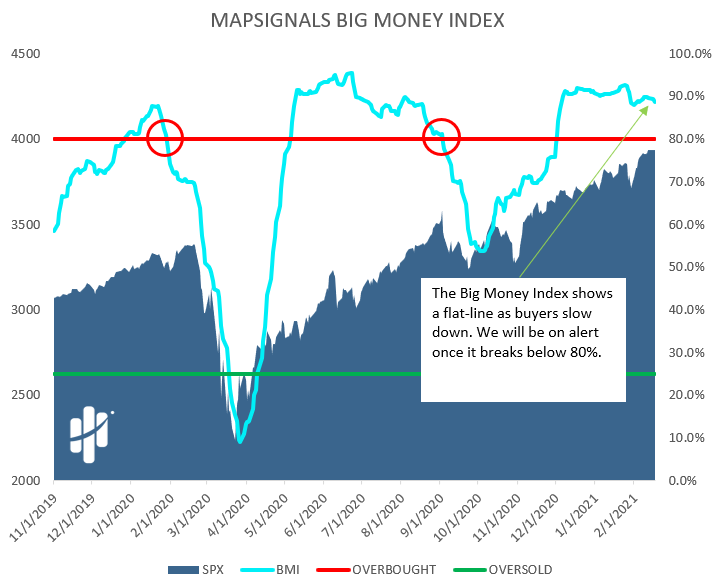 Our readers will remember the selling at the end of January as seen by the red bars circled below.  Those few days put pressure on the BMI.  It’s hard to see now, but recently there was been a small uptick in selling again: 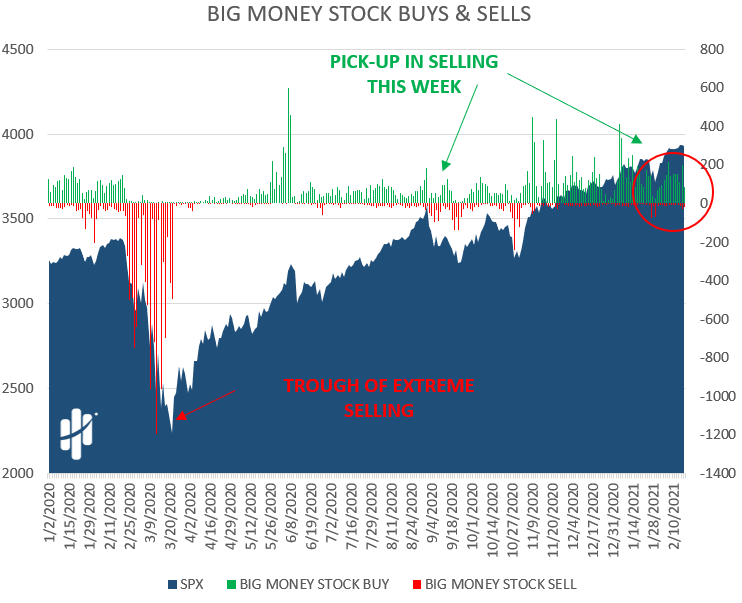 That tiny bit of selling is what’s keeping the BMI from lifting higher and caused the market pressure last week.  If selling intensifies, we’ll see the BMI start to deteriorate.  But if buyers step back in, like they did a couple of weeks ago, it would lift it higher again.  This combined with a slowing in the velocity of stock buying has us keeping a close eye on our data over the next week in order to determine if the currently flashing yellow light switches back to green light or to a red light.