The Inception of an Economic Supercharger

One quarter down with three to go and it’s clear some things have changed.

The first quarter closed with the Dow Jones Industrial Average leading the major market indexes (for a change) with a 7.76-percent gain versus 5.77 percent for the S&P 500, and 3.46 percent for the tech-heavy NASDAQ. The margin between the Dow and the NASDAQ was the widest in any quarter since 2006.

We point this out to quantify the cyclical rotation that’s occurred over the last three months or so. It’s quite a shift from 2020.

But with earnings season around the corner, where big profits are expected, things could change again. And historically speaking, April is one of the best months for equities. So, while the market’s cyclical rotation is important, in this post we’re going to look forward, concentrating on the expected blowout first quarter earnings season and favorable April seasonality, which could lead to multiyear economic growth. 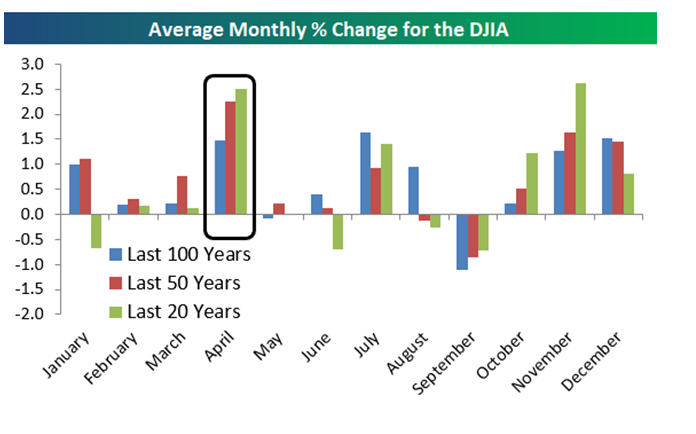 Over the last 50 years, the Dow has averaged a gain of 2.24 percent in April with November a distant second at 1.63 percent. Since 2001, November is tops with a 2.61-percent gain, but April trails only slightly at with a gain of 2.51 percent. That said, the index rose in April in 17 of 20 years, while November brought gains 15 out of 20 years. So, April has been more consistently up: 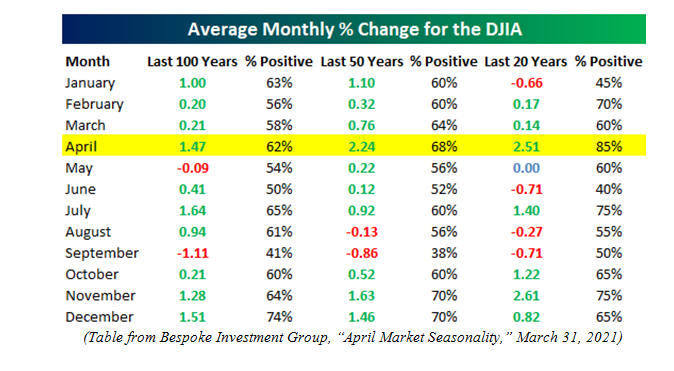 Since 1983, April’s gains have been fairly steady. But over the last 10 years, which is the green line in the below chart, there have been early dips followed by gains, then a mid-month plateau, and finally big gains in the last week to 10 days of the month: 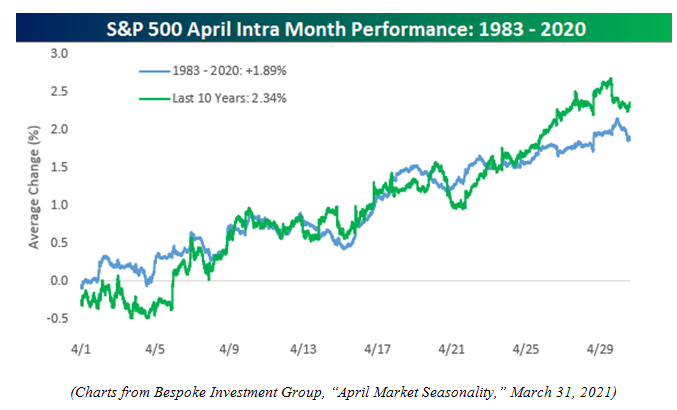 This makes sense as it coincides with earnings reporting. Expectations are up for this April as well, which is in line with recent history – over the last decade, per Bespoke, April has risen 9 of 10 times with average gains of 2.34 percent.

Moving beyond the historical data and looking past April, there’s an old saying that suggests investors “sell in May and go away.” But that strategy hasn’t paid off in recent years and will likely ring hollow this year too. Economists are estimating the U.S. economy will grow between 6 and 7 percent, fueled by massive fiscal stimulus and the rollout of COVID-19 vaccines, letting us emerge more and more from painful lockdowns.

We’ve discussed ad nauseum (and now will again) how an unprecedented amount of liquidity has entered the economic system in the last year. The total COVID-19 relief from government programs thus far is $5.3 trillion:

We’re witnessing modern monetary theory in full action. And now we'll get to adopt an infrastructure bill of additional liquidity, adding another $2.3 trillion (or more).

In addition to stimulus programs, the past 12 months (through January 2021) have seen demand deposits (i.e., checking accounts) rise 112.5 percent, gaining $1,780.4 billion, while the M2 money supply has gained $3,978.2 billion, which is unparalleled in American history: 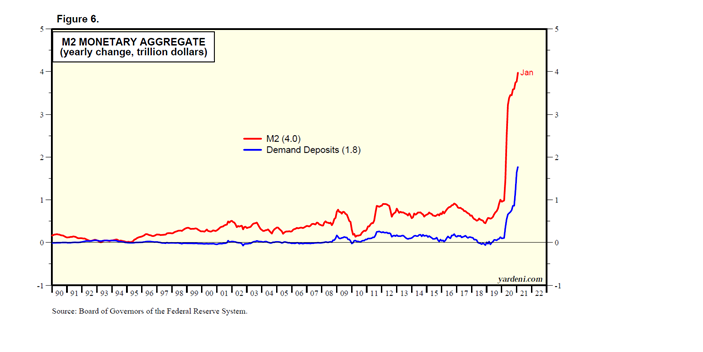 This fuel is already creating (and will continue to create) a sugar high in the economy, courtesy of Uncle Sugar, I mean Uncle Sam. According to the Wall Street Journal, households are ready to fuel an economic run:

“Households have entered 2021 armed with boatloads of cash…and the cleanest balance sheets they have had in decades…. $14.1 trillion combined in checking and savings accounts, compared with $11.4 trillion in 2019…. Their debt-service burden—the percentage of after-tax income used to pay off debt—fell to its lowest level in records going back to the early 1980s. This is a much different story than was the case when the U.S. was coming out of recession in 2009….”

That many people with that much money in hand is a reason we're seeing a manufacturing surge ready to meet this all-time demand. It’s so big we have two major manufacturing indexes reaching their highest levels since 1973 and 1983.

First, according to MarketWatch, the Philadelphia Fed Manufacturing Index is now at its highest level in nearly 50 years. The Philadelphia region’s business index leaped from just 23.1 in February, to 51.8 in March, its highest reading since 1973: 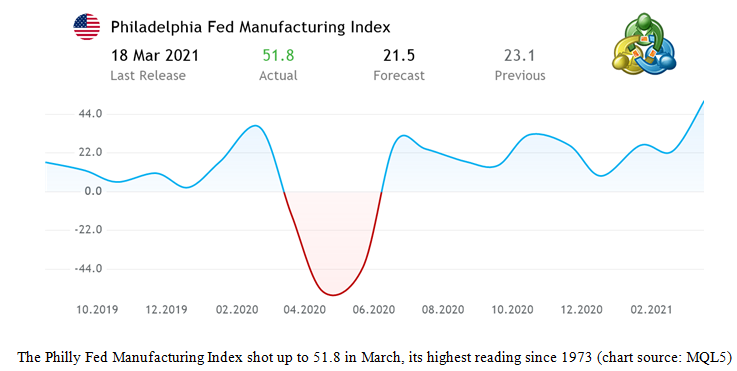 On top of that, we learned a couple weeks ago the widely watched Institute for Supply Management’s Manufacturing Purchasing Managers Index (PMI) of factory activity leaped to 64.7 in March, which is the highest reading since December 1983: 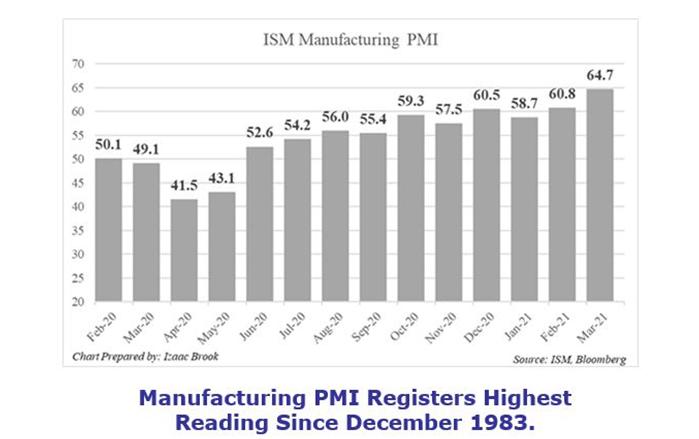 For perspective, December 1983 was when the dawn was about to break economically. The following year, gross domestic product reached 7.2 percent.

While some might think the U.S. is going at this recovery alone, we're also seeing Eurozone factory activity pick up, hitting its fastest growth rate in at least two decades. The PMI for Europe rose to 62 in March, up from 57 in February: 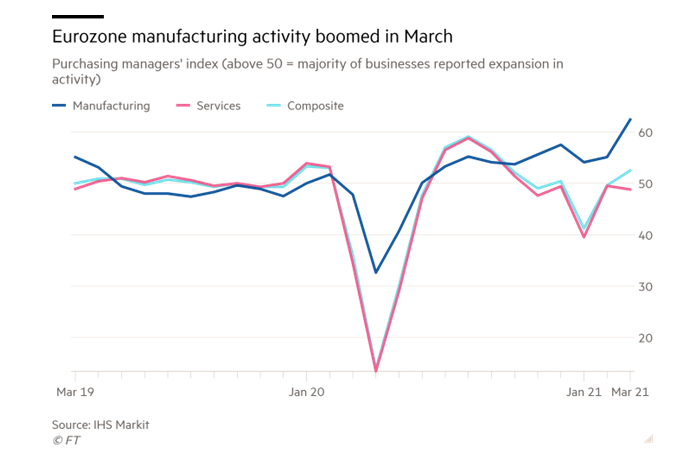 This type of global demand is just with the doctor ordered to help revive a lagging European economy.

The takeaway from this is that it's fairly amazing we can reach this level of factory activity during the latter stages of a pandemic. But it directly reflects the pent-up demand and revival of animal spirits amongst workers and consumers alike. It all portends to strong positive momentum throughout the rest of 2021.

And if you don’t believe us, fair enough. But perhaps consider listening to JPMorgan’s bullish CEO Jamie Dimon. In his annual shareholder letter, which is becoming required reading, he thinks the future is quite bright and the boom could last until 2023.