The Fog of War and Its Effect on Markets

You may have heard the saying, “Truth is the first casualty of war.” Well, as we sit here, we’re about two weeks into the Russian invasion of Ukraine, and the fog of war is still quite thick.

The conventional wisdom was that Russia would take parts of Ukraine (or even all of it) fairly quickly, then things would settle down. The worst-case scenario was that military operations would force a closure of the 40-mile border between Poland and Lithuania, which would lead to a direct NATO conflict.

But things haven't unfolded as many have thought. Supply chain issues and formidable opposition  are continuously slowing the Russian advance. Also, strong sanctions and military help from countries around the world have given some hope that hostilities will end with Russia falling short of its goals.

But we have to remember, the ultimate variable is Russian President Vladimir Putin. If Russia is unable to take control of Ukraine, it could put him in more than just political trouble. Members of his inner circle may not like risking access to their personal wealth.

Unfortunately, that is a huge incentive for Putin to continue to escalate. And that's why nothing is completely clear.

What we are more confident in is what the conflict means for public policy, at least in regard to markets specifically.

First, energy independence is further proving its worth, so the policies designed to suppress U.S. energy production are going to be tougher for the voting public to digest. The same is true for many European countries. We're already seeing Germany make moves to be more energy independent while also accelerating renewable energy timelines.

Green technology advancement and projects certainly will continue. But it's going to be tougher to curtail drilling, extraction, and pipelines for fossil fuels in the near- and intermediate-terms.

Second, while the war will likely make global supply chain issues even more problematic and inflationary, we believe the Federal Reserve is likely to pull back on tightening plans due to potential economic upheaval. That makes a 50 basis point hike in March unlikely now (Since this writing Chairman Powell has stated his support of only a 25 bps increase). We’ve said as much in the past. This debt is preventive in terms of rate hikes.

Now let’s turn our attention to the markets and how they've been affected over the last week as this conflict has continued. For that, we look to MAPsignals’ trusty Big Money Index (BMI), which measures large investor activity.

There is somewhat of an oddity over the last week, as we saw sellers return fairly aggressively with only 167 buy signals against 610 sells:

Yet, at the same time, the BMI increased to 42.1%, as of this writing (and continued increasing to almost 50% since): 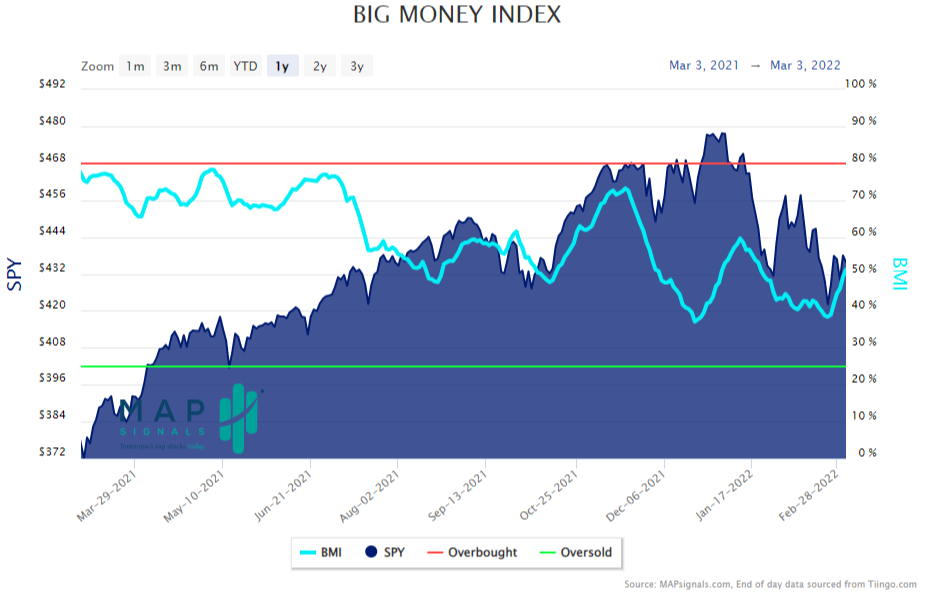 To explain the conflicting data, the BMI picked up late last week due to some big buys that seemed to be short covering along with past outsized sells falling off the 25-day window that makes up the BMI’s moving average. While we are used to stock markets experiencing overreactions, based on historical precedents, we think we are witnessing a gross overreaction.

Let's drill down into that.

The normally reliable BMI has been somewhat confusing lately as it's been sideways and choppy. But when you dig down deep into the details, the reason is the market has been engrossed in a giant rotation, as we've discussed in previous posts. It’s been even more pronounced since January.

Think of it like a washing machine. One sector is up while another is down. Not long after, the opposite takes place. Rinse and repeat.

That's why the BMI has been range bound – the big moves are happening on a sector rotation level. Also, money doesn't want to flow into bonds due to interest rate risk.

To put this into perspective, since 2022 began, energy and financial stocks have been 44% of all “big money” buys. Meanwhile, tech, healthcare, and industrials have been more than half the “big money” sells.

As for the market’s reaction now that war has overtaken the pandemic and inflation as key concerns, let’s again look to history for guidance. Like today, markets freaked in 2014 when Russia invaded Ukraine and annexed Crimea. Notice the “big money” ETF buying and selling activity for the first six months of 2014: 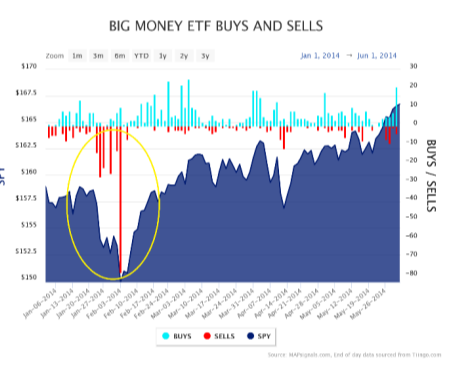 The market dragged lower at the time of invasion. But after things settled down a bit, the market settled too. 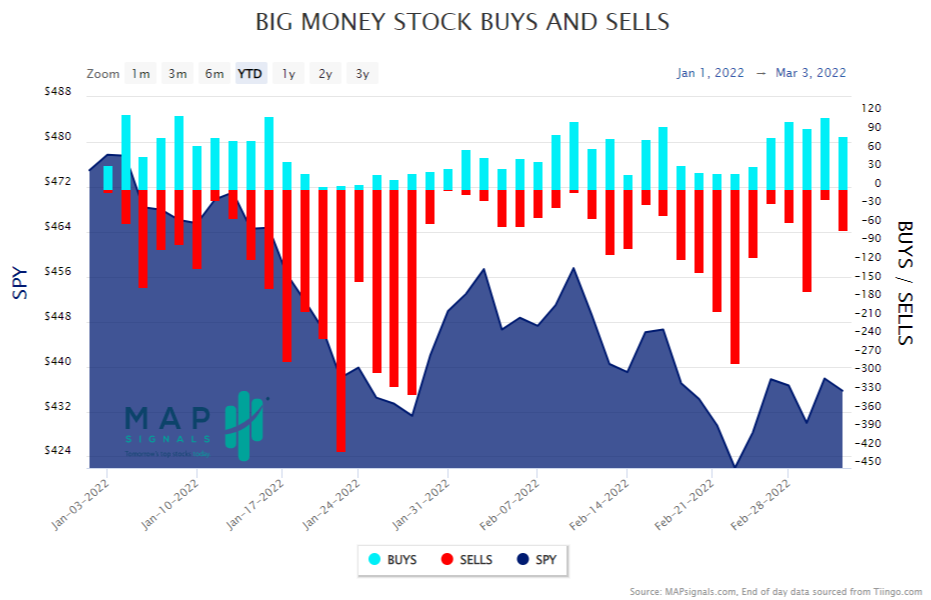 Whether or not that will continue, we don't know yet, but it is interesting to see historical data repeating itself. The market certainly isn’t rising high, but it’s not nosediving either.

Now we want to touch on a sector that is significantly impacted by this conflict – energy. As most people know now, Russia is the largest producer of oil and gas exports: 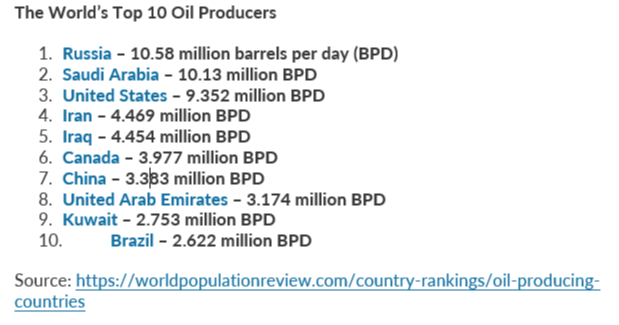 Well, Russia and Ukraine also account for 29% of world wheat exports and 75% of sunflower oil exports. This is why there has been significant discussion from politicians and media pundits regarding how to handle this indirect funding of the Russian military due to dependence on Russian exports.

As we saw last week, any major interruption or potential interruption of oil exports can drive prices higher, as oil prices have shot back above the $100 spot price. Thus, the energy sector has proven to be a bastion of strength in portfolios for 2022. And going forward, it's hard to see how this plays out where oil prices decline meaningfully anytime soon.

Because of the newfound tidal wave of profits from higher oil prices, we've seen a handful of companies adopt a new model of what they call “fixed plus variable” dividend policies. These are a departure from traditional dividend payouts, but one that investors will probably welcome.

This creative dividend structure provides a substantial base dividend that is positioned to grow over time along with a variable dividend and stock buybacks to return capital to shareholders. A great example of this new strategy is Devon Energy Corporation (DVN), which we own in client portfolios.

Devon has approved a policy of a fixed plus variable dividend of $1.00 per share while at the same time increasing its share repurchase plan to $1.6 billion. And after the fixed dividend is funded, it intends to pay out up to 50% of future cash flow in the form of variable dividends.

Taking all this into account, Devon’s current dividend yield after the last declaration is 7.2%.

This model is quickly becoming the future of energy stocks and should persist for the foreseeable future. That makes it one of the most compelling high yield hedges against inflation, global supply disruptions, and geopolitical risks associated with Russia, Iran, and China.