Some folks continue to focus on the negatives in the financial sector. However, we at Cornerstone Financial Services think there’s much to praise about it.

The recovery from the 2009 crisis is clearly ongoing; however, the job isn’t done yet. There’s still room to get back to pre-crisis highs.

But things look promising with the trends we’re seeing in dividends. Adding further confidence is that there may be a “roadmap” of sorts for how the recovery could further play out.

In general, dividend levels usually reflect economic health. It makes sense – you’d think companies would pay out more when performance is good than when it’s bad.

The financial sector’s recovery from the severe 2009 crisis was always expected to be long. And as the below chart of Standard & Poor’s (S&P) 500 Banks Index dividend payouts shows, it’s been a climb. 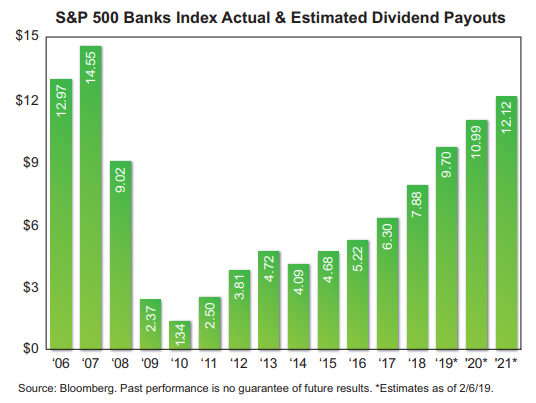 As of Feb. 16, 2019, the ninth year of the recovery, dividend payments were still nearly 25 percent below their June 2007 high. Despite that, Deloitte says the sector is “robust,” noting the return on equity for the industry was at a post-crisis high of 11.83 percent entering 2019.

And because of tax reform, the 23 major U.S. banks were able to trim their 2018 tax bills by $21 billion. Collectively, they paid an effective rate of 19 percent, which led to increased dividends and stock buybacks totaling a combined $28 billion, according to Bloomberg.

The financial sector’s recovery is still a work in progress. That said, patient investors should benefit from the opportunity in front of them.

The opportunity to benefit from an industry recovery is a story we’ve seen play out before. The current cast is the financial sector. But a couple decades ago, it was technology. 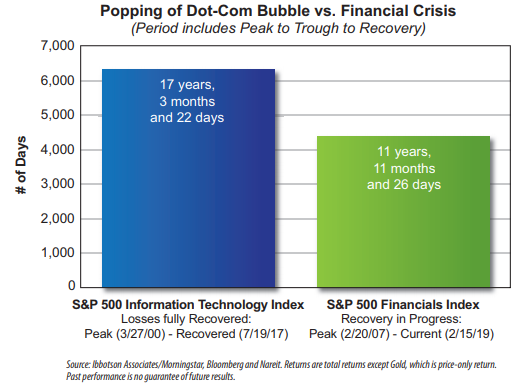 The above chart shows the recovery durations of each sector from the dot-com bubble and financial crisis, respectively.

While not identical in nature, the two comebacks have traits in common.

Both industries entered crushing bear markets that were similar.

And in a rather odd coincidence, the S&P 500 Information Technology Index lost 82.51 percent from peak to trough, while the Financials index lost 83.96 percent, per Bloomberg numbers. That’s a difference of just 1.45 percent.

The technology recovery spanned 6,323 days from 2000-2017. The financial version stands at nearly 4,400 days and is 14.9 percent away from full recovery, which is ahead of the pace set by the technology sector.

The Value of Patience

It wasn’t that long ago that people despised technology, saying it was tearing society apart. Today, billions of people across the world carry little computers in their pockets and use them daily. Technology is ubiquitous.

In other words, time heals. And patient investors know there is value in that process.

The financial industry of 2009 is not the same one that exists today. Things have changed. And as an investor right now, there’s a lot to like about the financial sector as it continues to recover.