The Value of Patience and Time

The stock market at the end of 2018 was a dumping ground.

But 2019 has seen a huge turnaround, so far. Let’s take a look into the valuations and key growth sectors driving the good performance.

Price-to-earnings (P/E) ratios are one of the most widely-used analytical tools out there. At Cornerstone Financial Services, we use them to gain insight on future performance.

The below table shows average P/E ratios relative to the annual total returns of the Standard & Poor’s 500 Index (S&P 500) over different periods. During any given nine-year period, there is a theme – and they don’t necessarily correlate. 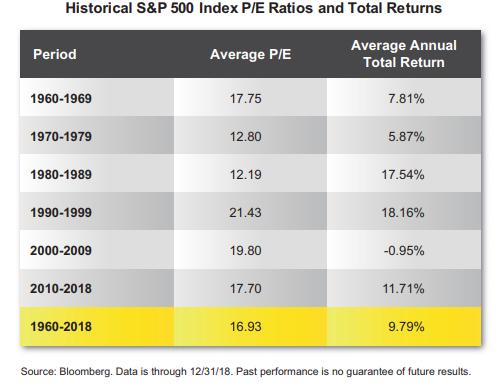 So while some say the market is expensive, the recent P/E data suggest otherwise.

As of mid-February, the Bloomberg consensus year-end estimated P/E ratio for 2019 was 16.15, and 14.55 for 2020. If these estimates are true, stocks will get even cheaper over the next two years, based off earnings growth. In fact, the S&P 500 Index is at its cheapest levels relative to forward looking earnings since 2013, according to Money, which further debunks the myth of the “expensive” market.

In all, it means there is still room for additional stock appreciation to get P/E ratios in line with their historical averages.

The data said the market was oversold in December 2018, and the growth since then has shown that to be true. Therefore, we’re bullish on U.S. equities in the long-term, though some near-term giveback is expected as the momentum of early 2019 will slow to take a breather.

When, though, is anybody’s guess.

So far in the Q4 2018 earnings season, 70 percent of S&P 500 companies have reported a positive earnings-per-share surprise. And 62 percent have reported positive revenue surprises.

Further evidence can be seen in the S&P 500’s blended earnings growth rate. So far in Q1 2019, it stands at 13.1 percent. If that holds through the end of earnings season, it will be the fifth straight quarter of double digit earnings growth for the index.

Investors would have been quite unlucky to have sold before Christmas Eve. If they held on, they’ve more than recovered.

As we’ve said before, the data don’t lie, which is why we’re still long-term bullish.

It seems a famous quote from Leo Tolstoy applies here, “The two most powerful warriors are patience and time.”