This week we again examine what’s happening economically and in markets amidst our new COVID-19 reality.

There is good news on the personal savings front. What happens going forward in that regard will be telling. As for markets, investors should consider themselves warned about potential market turbulence ahead. But the longer view is promising.

Let’s start with the good news – we’re not going into a depression.

Goldman Sachs economists estimate consumer spending now stands at 90 percent of its pre-pandemic level, up from a 74-percent bottom. Also, manufacturing exports stabilized in May, which should bring in unprecedented growth in the latter part of 2020, with growth rates in 2021 approaching 5 percent annually.

Positive sentiments can also be found in the latest high frequency data: 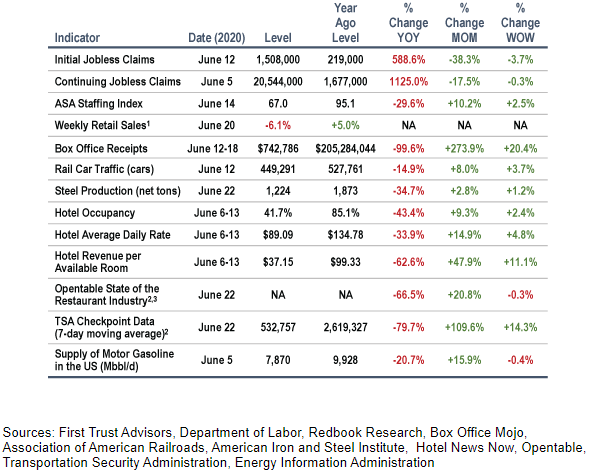 Those numbers are encouraging, but we’re still dealing with the extinguishing of the global economic light.

Interestingly, the personal savings rate skyrocketed in April to 33 percent, the highest rate ever recorded. But that’s also what led to a comparatively odd inversed May personal income and spending report as government “helicopter” money dried up and economies began to reopen allowing for spending of those savings. 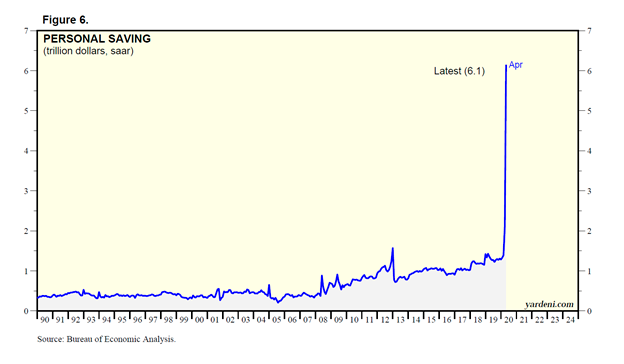 Remember, personal income surged in April by 10.5 percent, which is normally good. But that rise took place while private sector wages, salaries, and income plummeted.

When factoring in the drops in other forms of income, annualized savings grew by $4 trillion in April. Thus, government transfer payments alone accounted for 75 percent of the burst in savings.

What does that mean going forward?

The early stages of the recovery will look like a “v,” as we’re experiencing now. But full recovery is still years away. Real gross domestic product won’t hit late-2019 levels until at least 2021. And it won’t be until 2023 that we see unemployment drop to 4 percent or less.

To dig us out of this shutdown hole, entrepreneurs and innovators have their work cut out for them.

Our trusted Big Money Index (BMI) chart shows a shift in buying activity. As the BMI started to tick down, right on cue, the market fell – remember the 6-percent drop on June 11. Then the gravity-defying march back upwards occurred, before a significant drop again on June 24. 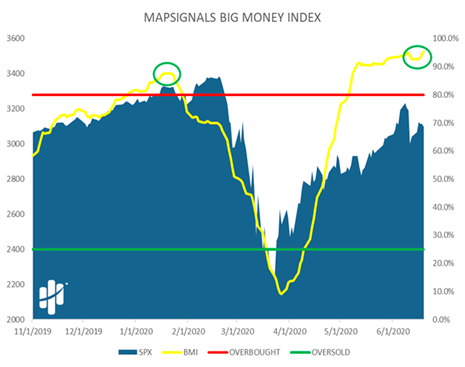 These moves can be confusing if you’re just looking at headlines. There are just as many bearish headlines as bullish ones. Trying to make sense of it all can hurt your brain.

That’s why we look at data. And right now, the data makes it clear a shift is about to happen.

Big buying is slowing down, first and foremost in exchange traded funds (ETFs), where buying records were set recently. The tiny, right-most circle near the bottom of the chart shows the stark drop: 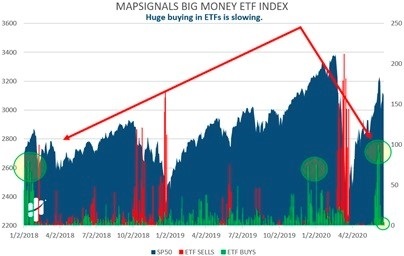 Big stock buying has slowed as well, having peaked a few weeks ago. We can see the same vacuum as the ETF chart – notice the small, right-most circle relative to the larger circle that precedes it on the left. 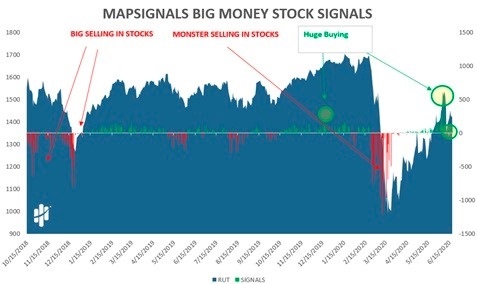 While the news jerks our emotions around and confuses, the data are clear that we can expect lower prices in the near term. Please don’t mistake though, we’re not subscribing to a dire, bearish opinion of prolonged stock market pain. Rather, we think markets are setting up for a nice reentry in the future as they get further frothy with stimulus money from mom-and-pop investors.

When the inevitable washout comes, which we are beginning to see signs of, the market will reset. And then it will be a good point for reentry, as we foresee the market resuming its upward path soon thereafter.

We know COVID-19 cases will spike, which will give the media a likely excuse to explain market pullbacks. But we know the tell was there long before – big-money buying dried up.