Bearish investors received a reprieve on June 11, as markets seemingly fell off a cliff. But since then, markets have recovered well, preserving the technical threshold of around 3,000 for the S&P 500 and 9,500 for the Nasdaq composite.

If – and this is a big if – there are rounds of continual selling in the near future, then the 50-day moving technical average that comes into play is around 2,900 for the S&P 500, which is a fine place to add investment.

To achieve sustained selling, we believe a combination of most or all of these six downside risks would be needed to offset the fiscal stimulus forces of the Federal Reserve, Treasury, and Congress:

Last week’s Fed meeting had one important takeaway – policymakers will keep interest rates near zero, probably until at least 2023. This is based on two things. First is Fed Chairman Jerome Powell’s own words. The second is historical context from the last financial crisis in 2008-09.

Here is Powell’s direct quote – “We're not even thinking about thinking about raising rates.” If we were wondering what he was considering, it’s clear now.

In terms of historical context, post the “Financial Crisis” interest rates weren’t raised until 2015, after the jobless rate fell below 5 percent, as this graph of the Federal Funds Rate illustrates:

The Fed’s current forecast has the U.S. around 5.5 percent unemployment at the end of 2022. So, we think it will dip to 5 percent or lower in 2023, meaning it could be time to address interest rates again.

In the meantime, we need to keep in mind that reports of economic recovery started back in May, which is confirmed by continuing improvements in high frequency data (as of June 16th): 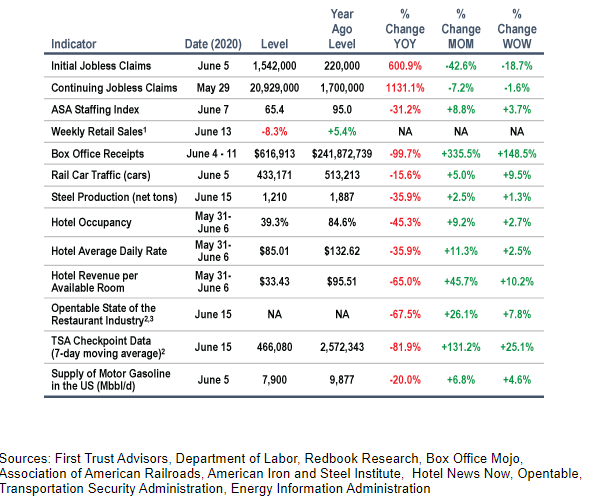 Additionally, data like last week’s retail sales report are encouraging. Sales blew past even the most optimistic estimates, rising 17.7 percent in May. Including April revisions, sales are up 20.2 percent, easily beating the consensus estimate of 8.4 percent.

While still down year-over-year, it’s the path forward that matters most. Thankfully, evidence suggests we’ve started recovery at an extremely healthy clip.

We must always remember there is an invisible sea lying underneath markets that provides indications of which way markets will go – the trusty Big Money Index (BMI). As you can see, it often points to where markets are headed in advance.

While it’s one of our weekly go-to data points, many investors are oblivious to how the S&P 500 floats on top of and follows leading indicators like the BMI. 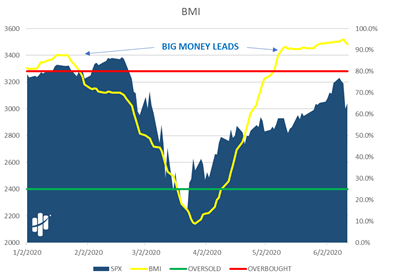 We’ve been pointing out for almost a month now that the market is overbought. When buying hits such extremes, dips often follow. It caused us to bring up exchange traded fund buys nearing a crest, which is why June 11’s swoon in stocks felt like such a storm.

But none of that is breaking news to readers of this blog. As quick as it was, this correction was expected.

On Monday, June 8, buyers were still entering the market. But the rug was pulled from underneath them as buying dropped by 90 percent over the course of the week. 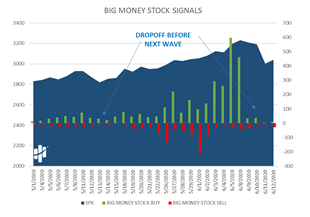 In terms of market signals, the five-day average buying signal count was 350 on Monday. Tuesday, it was 33. Thursday and Friday of that week were even lower.

Last week we mentioned crazy buying from a sector perspective – every sector was being bought at extreme levels. Well, it happened again, but almost entirely on June 8. Then the buying subsided Tuesday through Friday.

To make sense of it all, remember the words of The Great One, Wayne Gretzky. He famously said, “I skate to where the puck is going to be, not where it has been.”