There’s been a recent tweak to the U.S. trade talks with China. The two nations are now employing a phased approach to the negotiations and approaching agreement on the first phase.

The new approach is most likely the result of President Trump’s advisors convincing him to complete the negotiations in phases so there are wins going into an election year.

In other words, it’s politically motivated.

In our opinion, it’s tough to balance politics and the American rule of law when it comes to trade and intellectual property (IP).

Oddly, an advantage China has over us is democracy doesn’t stand in its way. There are no elections to distract China.

Still, we don’t want to give in for the sake of politics when we’re on the verge of enforcing product protection laws vital to our capitalist system and the rule of law. We don’t need to relent.

China’s involvement in our economy has been declining and we’re doing fine. This chart shows the diversity of our trading partners this year (China led in 2017): 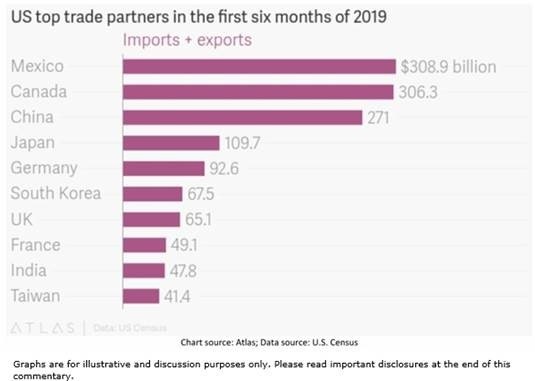 The real issue at play was crystallized during the controversy between the NBA and China. That is, there are two competing systems, and China ruthlessly wants it their way, which isn’t our way.

U.S./China relations are really about communism versus freedom of expression and respecting laws. And it doesn’t look good when one party tries to impart its way, despite clear differences.

Don’t forget, China has no problem stealing IP from trade partners. Also remember they need us more than we need them. That may not always be the case, but it is today.

We’ve imposed tariffs on them for more than two years and our economy hasn’t suffered. We have the best peacetime employment numbers ever, growing GDP, and rising wages with minimal inflation.

And, it’s clear there are several law-abiding countries that can fill the trade gap left by China, which continues to steal and is experiencing slowed growth. In contrast to our economy, China is sputtering. It’s experiencing its highest inflation in six years, primarily because of food prices rising 11 percent: 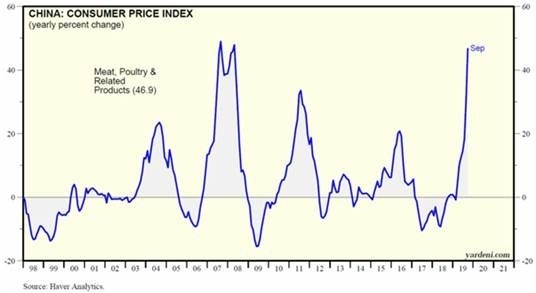 Making things worse, China’s weak currency is causing import prices to rise. They’re trying to offset this with tariffs, but it’s causing inflation and, in our opinion, making them agreeable to the first phase of trade negotiations, much of which eliminates tariffs on imports.

This all makes us Cornerstone a bit nervous because things will only get more political as the election nears. While everyone thought these trade talks would negatively affect our economy, they haven’t yet. But, if things become more political, it could create a headwind on market and economic growth.