Recent volatility in the market can be attributed to the trade negotiations between China and the U.S. hitting an impasse. It’s gotten to the point where each country has announced new tariffs on the other, which potentially widens the gap at the negotiating table and extends the trade war.

Who’s winning the trade war? So far, it looks like both combatants are losing, while other countries win.

At Cornerstone Financial Services we’re proponents of free trade because we understand the effects of trade wars (consumers lose).

But this trade war is much more complex than just tariffs because of the intellectual property (IP) theft involved. Essentially, China has been stealing the research and development of companies throughout the world.

Here’s one way it happens. Through the promise of cheap manufacturing, Chinese firms take on manufacturing projects from around the globe. But when firms send in their product specifications and the like, Chinese firms simply take it or require a transfer of technology as a condition of doing business.

The problem is a big one – some estimates say hundreds of millions of dollars of IP theft occurs annually. It’s happening in manufacturing, pharmaceuticals, luxury goods, software and more.

Over time, that cost and its associated bad economic effects outweigh the price of tariffs. In our mind, tariff costs are not a recession-inducing drag, whereas habitual IP theft could bring on recession or worse for the U.S. and other Western nations.

Last year, we exported $180 billion to China, which is 0.9 percent of our gross domestic product (GDP). Conversely, China exported $559 billion to the U.S., which is 4.6 percent of their GDP. A much higher proportion of their economy is subject to tariffs than ours.

And as the chart below shows, the long-term Chinese economic forecast is a downward trend. The pace of that trajectory could be greatly accelerated in a long trade war. 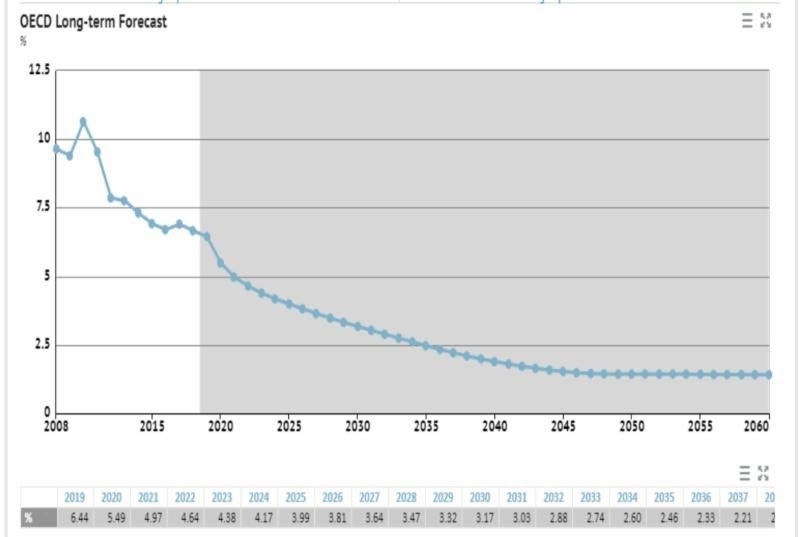 And if there is a long trade war, U.S. companies will shift their supply chains to other Asian nations, Mexico, or bring production back home. That would further damage the Chinese economy.

In our view, the U.S. is not the only country China’s piracy has taken advantage of, and China may soon realize that it could be more isolated in the world than previously thought. While China’s population and economic size cannot be discounted, it could soon find itself in a large, but lonely existence.