We’re heading into earnings season (as of this writing JP Morgan announced profits and Blackrockkicked it off with blowout quarters). Per usual, news is negative and it’s easy to worry about markets and stocks because that's what news programs us to do.

As we mentioned last week, we're still seeing more pulling and tugging in markets from day to day but we hypothesized that we would start to see a few more buy signals versus sells. That came to fruition. As you can see in the MAPsignals Big Money Index (BMI) chart below, there were 380 buy signals versus 334 sell signals: 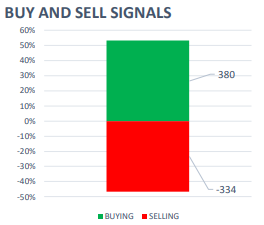 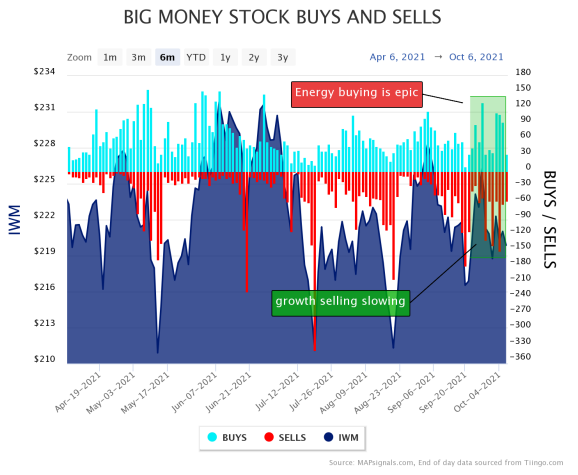 This continues to lay a seemingly good foundation going into earnings season, which we expect to be stellar. But today, as groundwork going into third quarter earnings, we want to concentrate on current economic news, as the post title suggests. Specifically, we want to hone in on whether the economy is supportive or not for the market going forward.

As we’ve discussed ad nauseum (and you probably never want to hear us talk about again), inflation continues to climb: 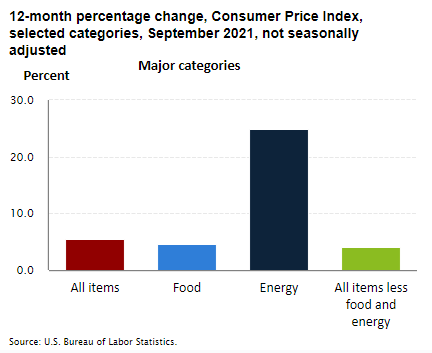 Last month’s Consumer Price Index (CPI) rose 0.4%, taking the annual total to 5.4%. This inflation is running even higher across the world, especially in China and some other nations. It could be worse here, but our energy independence is keeping energy prices in check relative to places like Europe. The good news is, despite inflation, the U.S. remains an oasis to the world, even with port bottlenecks and supply chain glitches seemingly indicating inflation will not soon subside.

This is a good example of something we have talked about before – the economy is not a light switch to be turned on and off at will. We're now experiencing the effects of attempting to treat it as such.

Comparatively, in terms of economic recovery, the U.S. is well ahead of the rest of the world. And thankfully, much of the economic uncertainty plaguing financial markets is seemingly beginning to dissipate.

One clear indicator of this is the fact that the U.S. dollar is near a one-year high. That’s due to the nation’s positive economic growth and having higher interest rates that continue to attract foreign capital, again comparatively to the rest of the world. 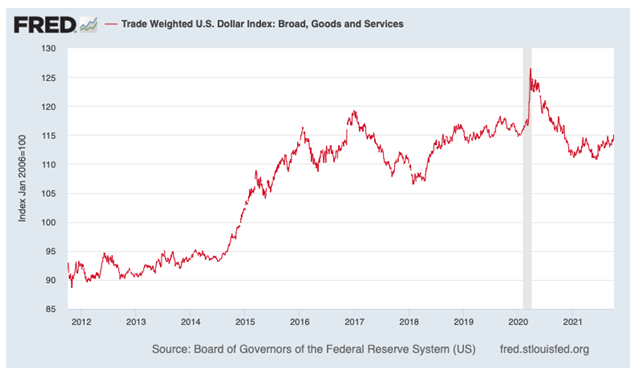 Even as we talk about inflation as a risk (again), it’s important to remember how, little more than a year ago, our economy was characterized by deflation. The Federal Reserve felt it needed to “fix” this with easy money policies, ultra-low interest rates, and quantitative easing. Obviously, the problem is the Fed has seemingly well overshot its 2% inflation target by a wide margin.

Fed Chair Jerome Powell put the blame at the foot of supply chain bottlenecks. More specifically, last week said the surge in prices this year is “a function of supply-side bottlenecks over which we have no control.” This commentary, is what we believe is leading to the Fed bond buying program ending this year and the pulling forward of interest rate increases next year.

For the time being, we're looking for more dollar strength as the Fed begins tapering, and even more when rate hikes start, especially given the present normalization of the U.S. economy ahead of the rest of the world. Emerging markets, especially, are significantly behind in their recovery after COVID-19 relative to the U.S. because of lower vaccination rates and an inability to pursue aggressive deficit spending. The increasing strength of the U.S. dollar reflects this widening economic discrepancy.

We point this out because the news is almost always negative. But when looking at data through a comparative economic lens, we’re well ahead of everybody else and in good shape. In short, it could be worse.

It’s time for another chapter in our continuing quest to batter negative news narratives with data-based facts.

The Bureau of Economic Analysis (BEA) released its measure of the total output of the economy, known as gross output (GO). As of June 30, 2021, GO hit a record $50 trillion. To put this in perspective, comparing the more popular talking point on the news, it looks like GDP should total about $22 trillion this year, which is less than half of the $50 trillion of GO.

The reason for the discrepancy is GO measures ALL SPENDING by business, government, and individuals. It’s a more comprehensive measure of growth than GDP because GDP measures just the consumer portion of the economy. Thus, it can be misleading. 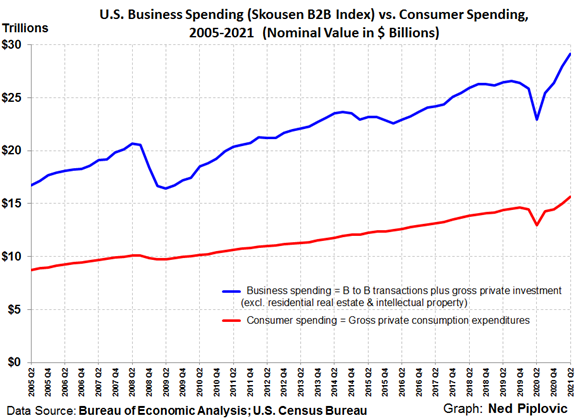 Even better, GO includes the supply chain. As discussed above, the supply chain encountered unprecedented bottlenecks, leading to inflation. But remember that consumers want many products that are in short supply, lying just offshore in tankers. That has built up demand for a wide array of goods. However, since GDP is overweighted 70% into consumer spending, GO gives us a much clearer picture of the business production in providing those goods that are not yet sold.

The base of earnings season is the economy. Based on GO, the foundation is there for the earnings reports to well exceed analyst estimates again, leading to what should support a rising market.

Additionally, research firm Argus Research still sees full-year 2021 GDP growth at 5.7%. So, as the government continues to try to “help” us, perhaps we ought to say we’re doing just fine, thanks.

Looking beyond the political sideshows consistently on the news, underlying market fundamentals continue to be strong. For example, S&P 500 forward revenues just hit another record high during the last two weeks of September, according to famed economist Ed Yardeni.

At the end of September, analysts estimated that S&P operating revenues rose 27% year-over-year in the third quarter. That was following the 88.6% gain in the second quarter. Keep in mind, analysts are typically conservative, so we expect the actual results to beat those forecasts. That should create some very bullish earnings surprises, even with the expected warnings of more possible supply chain disruptions in the earnings reports. To put this in perspective for all of 2021, we’re likely to see 45% earnings growth, and those numbers support a bullish market.

To wrap this all up, we know that too much of a good thing is never enough to brighten a bear's sullen mood. We think the economic landscape and recent data, along with the expected earnings growth, provide more ammunition for the bulls who say we’re heading into Roaring Twenties 2.0 versus those bears saying we’re heading into stagflation. Thus, at this point, we’d rather put our faith in American economic ingenuity and the strength of the American workforce.