How We Really Stack Up on COVID-19, Economics

At Cornerstone, we’re often asked about the “disconnect” between the performance of the stock market and the never-ending news about how bad the U.S. is botching its COVID-19 response.

When peeling back the data, a lot of the views seem to be mostly unfair comparisons to the rest of the world. The common theme goes something like this – the economy is tanking at record levels, the jobless rate is the worst in 80 years, and (insert cherry-picked country/region) is handling the crisis better than us.

In this post we’ll complete a factual, apples-to-apples analysis of the U.S. and other areas of the world. This will provide a balanced perspective to the nonstop negative news pounding us daily.

Let’s start with the market. Recently, the market rally expanded to some of the more beaten down sectors. While it’s too early to call it a trend, it appears some of this “re-opening trade” may be a result of COVID-19 numbers improving or flattening across the board: 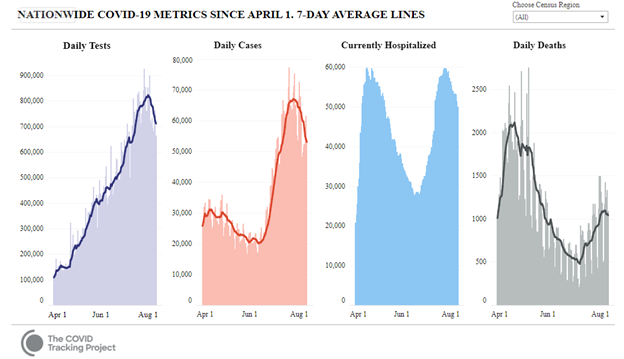 But, if there’s one thing to take away from this post, it’s that the market does not care about anything other than facts. The market sees through the biased, cherry-picked approaches.

For example, consider the reporting on the U.S. gross domestic product. Many accounts painted a gloomier picture than actually exists. If you compare apples-to-apples, in the same period, GDP numbers for many major economies around the globe are worse than the U.S.: 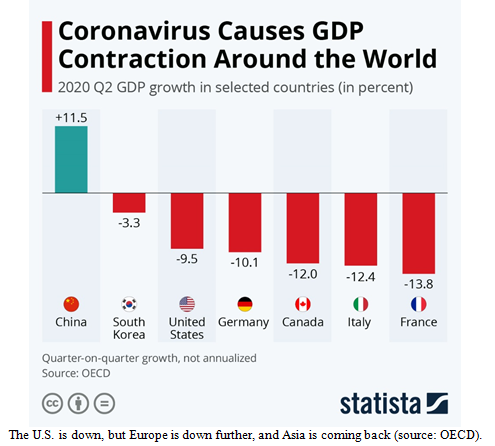 During this time, the Euro Zone GDP declined an annualized 40.3 percent, or -12.1 percent on a quarter-to-quarter basis. Other examples of GDP decline from last quarter include Spain at -18.5 percent, France at -13.8 percent, Italy at -12.4 percent, Canada at -12 percent, and Germany at -10.1 percent.

China’s GDP over the same period went up 11.5 percent on an annualized basis. The reason for that is the economic pitfalls associated with COVID-19 hit them earlier – China’s first quarter GDP was down 6.8 percent. As a result, their recovery is ahead of everyone else’s – hopefully the positive performance is foreshadowing for GDP lifts worldwide.

As you can see, the U.S. is statistically managing the forced economic shutdowns in a dramatically better fashion than some other countries. We believe this is helping what’s reflected in the stock market outperformance relative to the rest of the world, regardless of what you may hear in the daily news feed.

The U.S. is also vilified for the historically bad unemployment rate, especially when compared to a European jobless rate that’s barely budged. How is that even possible when the European nations are in deeper recessions? 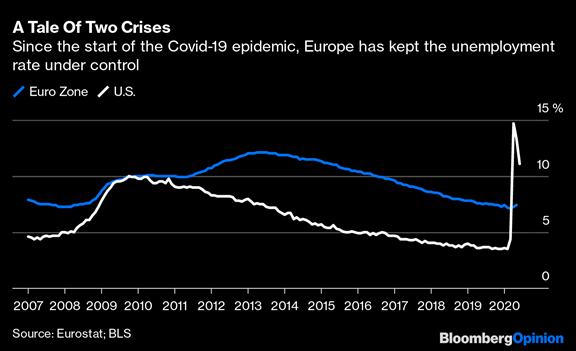 Like the GDP narrative, this criticism is off base. Europe’s economy is structured on lifetime job guarantees. As we know, the U.S. economy is not.

Turning to COVID-19 analysis, the U.S. seems to be bashed the most for its pandemic response. But those media reports rarely contain statistics adjusted for population or important context.

If you take equivalent slices of populous nations in Europe and Latin America, the death rates are almost identical.

With those states under control, it could be argued that on a forward-looking basis, the U.S. is managing the health implications of this crisis better than its European and Latin American counterparts. And while the U.S. has the most cases, we’ve also administered many million more tests than other prominent nations.

We point all this out because, again, the market doesn’t care about anything other than facts. When looking under the surface and omitting the political overtones, the above health and economic data are helping to guide the U.S. equity market outperformance.

And now I’ll get off my soapbox!

We continue tracking high frequency and COVID-19 data (below). As we said before, we think a full recovery will happen when unemployment dips below 4 percent, which we see happening in late 2023. For that to happen, economic activity must go up, and virus cases must continue to decline/flatten. 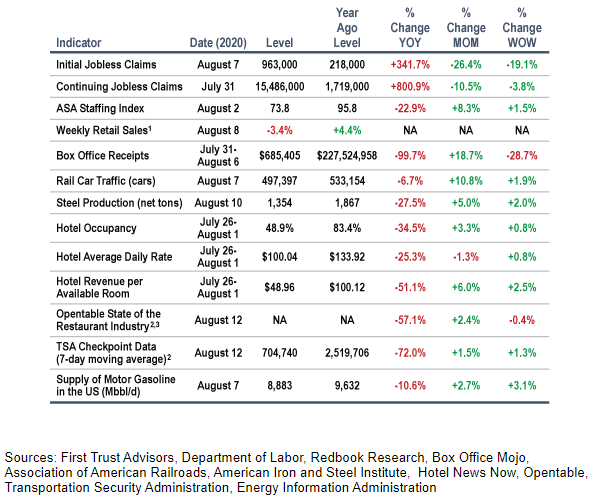 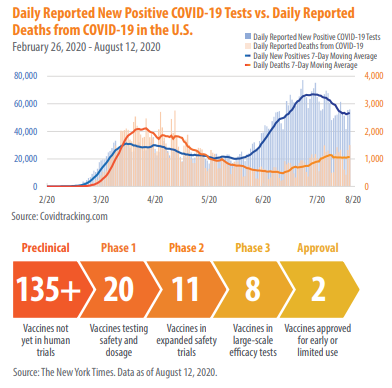 That said, we’ve had positive big news over the last couple weeks as payrolls expanded faster than anticipated while unemployment continued to decline. Nonfarm payrolls rose 1.763 million, while civilian employment increased 1.35 million. These figures show we’ve recovered about 40 percent of the jobs lost in March and April.

Second, and this is the best news, July average hourly earnings and total hours worked were up 0.2 percent and 1 percent, respectively, over their June readings.

At the beginning of this recovery, these figures moved in opposite directions. Layoffs tilted towards lower-paid workers, meaning the average earnings for the remaining workforce rose, while total hours worked fell. As hours rebounded because of lower-paid workers being rehired, the pattern reversed.

Now they’re rising together. That’s a strong indicator of a symbiotic recovery.

With No Sellers, Everyone’s a Buyer

Last week we were close to history in terms of overbought market periods. As our readers know, we look at Map Signals’ Big Money Index to understand the buy and sell signals of institutional investors (the “big money”).

Well, we’re now in the longest overbought period ever, surpassing the 65-day period in the mid-1990s. 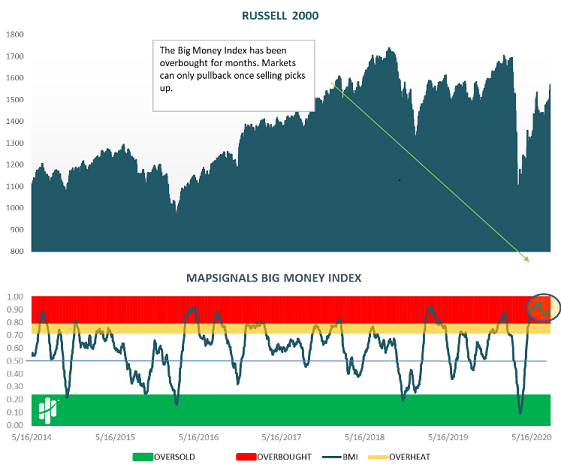 Moving forward, we’ll focus on which sectors amass the most capital. We can clearly see on a sector basis that sellers are scarce and some sectors are attracting investment. For instance, Staples, Materials, Discretionary, Industrials, Healthcare, Technology and Communication have all benefited from the buying frenzy. 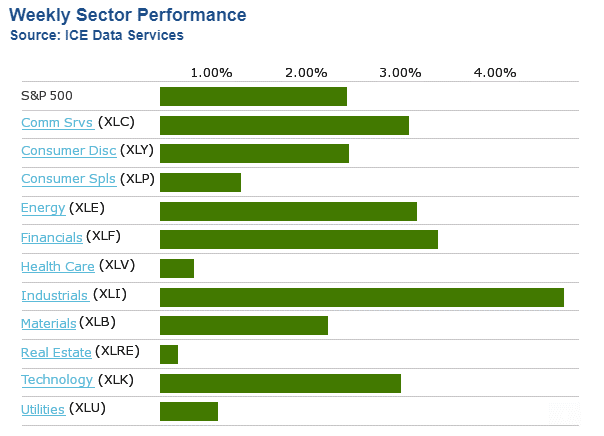 We won’t see this reverse until a catalyst causes selling to pick up.

And while another Black Swan event is possible, we don’t see a catalyst popping up for the remainder of the summer. However, soon we’ll start to focus on potential hurdles that could arise in the fall.