The COVID-19 recession is by far the weirdest one we've ever experienced. There's no way anyone could've forecasted the effects.

Despite a V-shaped bounce off the bottom with 33.1 percent annualized real gross domestic product (GDP) growth in the third quarter, and robust growth expected this quarter (more on that below), U.S. GDP is still lower than it was a year ago. Oddly though, most big companies haven’t suffered much or any financial damage. Unfortunately, that has been almost exclusively the domain of small businesses – and it’s been dramatic.

What this means from an economic standpoint is the economy will continue to heal, but it will take years to fully recover. Additionally, with this new wave of COVID-19 cases, we should expect some economic data weakness in the first quarter of 2021.

Yet, GDP Could Grow

But let’s be clear – don’t let data weakness scare you, Cornerstone does not see a double dip taking place. In fact, we anticipate real GDP growth of 3 percent for 2021.

While that might not sound too great, it would be the first time GDP growth finished at 3 percent or more in a calendar year since 2005. Nonetheless, any return to complete normalcy, which to us means driving the unemployment rate to less than 4 percent, will take years. And even though we forecast about 6.3 million new jobs next year, that would mean the unemployment rate will still be around 5 percent by the end of 2021.

From an economic standpoint, the most interesting thing to us is the Federal Reserve Bank of Atlanta’s GDPNow estimate of annualized fourth quarter GDP growth was updated twice within the last week. In mid-November, the estimate was a mediocre 5.6 percent annualized growth. But last week it revised to 11.1 percent, and then again to 11.2 percent. 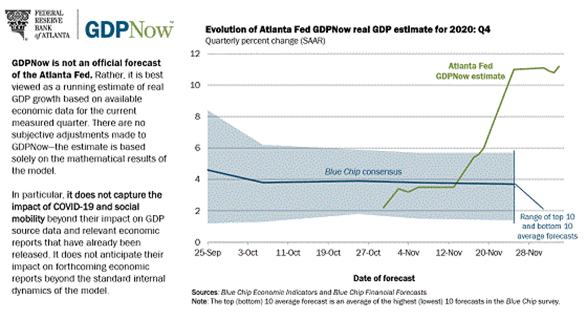 The primary reason for this large upward revision was that real personal expenditure growth is now estimated at 2.6 percent and private domestic investment growth is expected at 28.4 percent. More simply, contrary to the news reports, this means we are nesting at home, traveling less, investing more, and spending more money on our homes.

And all of that is boosting real GDP growth.

Five Key Factors for Investors as “Catch Up Trades” Continue

Switching to markets, as we prepare to go into the new year, let's focus our attention on Map Signals’ trusted Big Money Index (BMI), which measures institutional investor (“big money”) activity and is now overbought. To review, overbought means 80 percent or more of “big money” signals were buys on a rolling 25-day moving average. 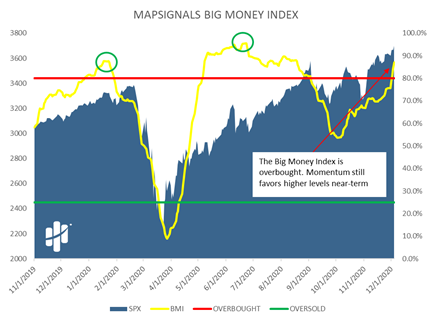 For loyal readers, that means buying isn’t sustainable and should peter out sometime in the future. But as we’ve written before, overbought conditions can last for weeks. Or as in the case of this past summer, for months.

To simplify this situation, consider that we are in Phase One of the chart below. The market peak should be near Phase Two. So, the question is, when will the BMI peak? 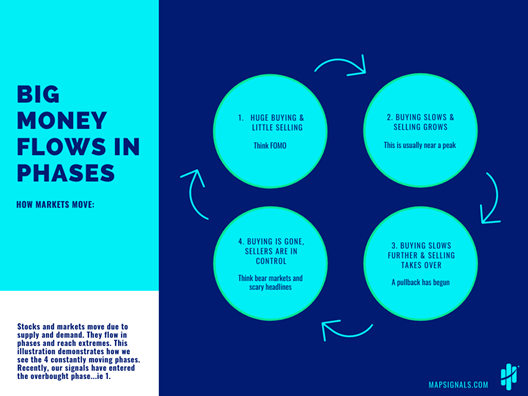 Since 1990, the BMI has reached overbought status 68 times. The average duration until the market peak (i.e., Phase Two) has been 23 trading days, which currently translates to Wednesday, January 6, 2021. However, earlier this year the BMI went overbought on May 6 and stayed overbought until September 2, a total of 83 trading days.

Most abnormally though is that this current overbought period, which started on December 2, marks the third time this year the BMI has gone overbought. It happened in January, May, and now December. As such, this year has undoubtedly been one of extremes, for both buying and selling. What else can we expect in 2020? 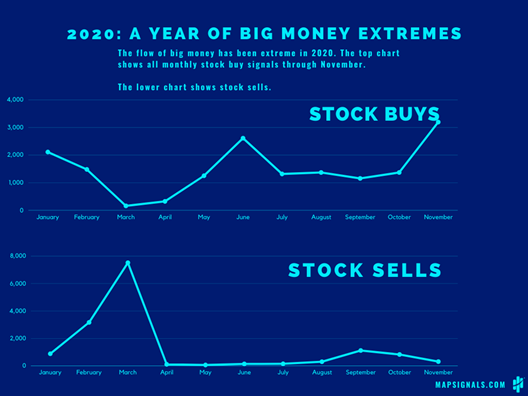 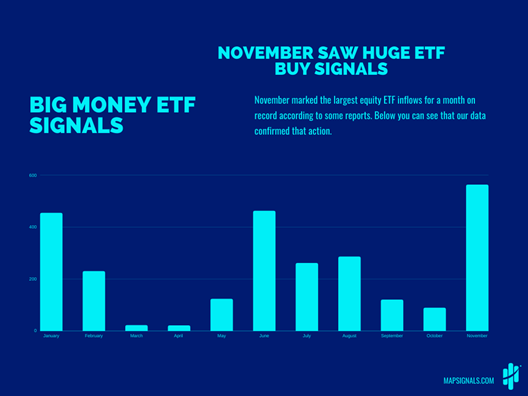 As we’re trying to snap this all into focus, let's review what we look at from a market cycle perspective:

In order to know where we are, we need to know where we've been. In this instance, since the vaccine was announced, “big money” has flooded into sectors that were not high priorities earlier in the year.

While the technology sector has dominated in 2020, recently it's been held back while poorer performing stocks have been gobbled up in anticipation of another reopen: 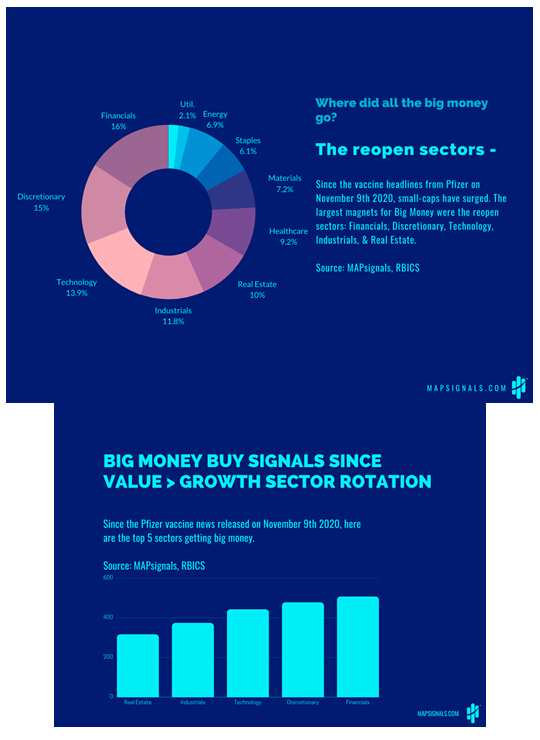 So, “big money” has recently been favoring the “class clowns,” not the best-of-the-best from a sales, earnings, and debt perspective for the year. This just means continued patience is required, as the leaders will return to leadership. As for right now, we’re just experiencing more “catch up trades” for when things get better.