In last week’s post bidding farewell to the 4% Rule, we said we’d focus this week more on market data as earnings season drew to a close, including how that information would affect markets for the remainder of 2021. Well, as we sit here today, the data support the bulls over the bears, regardless of what you hear in the media.

For instance, last week the jump continued in the trusty Big Money Index (BMI) from MAPsignals, which measures institutional investor activity. The current data, which we’ll cover shortly, continued to impress during a time of year that’s historically strong. We saw an incredible 688 buys and only 179 sells: 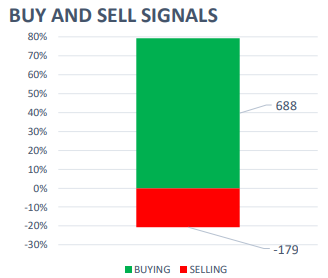 While we’re starting to approach “overbought territory,” it seems that there is still plenty of room to run, and that’s not even taking into account what readers of this blog know – the market can stay “overbought” for a long time. It’s clear there is broad, strong buying across all market sectors, with energy, financials, technology, real estate, and discretionary being the strongest five:

We think this indicates we’re not entering yet another sector rotation, but that there is strong underlying support across the market. Still, there’s been an uptick in our clients being concerned about the bottom falling out after a historically strong October. The news media seems to share the same sentiment. But as we’ve just shown, the data state otherwise.

We read a funny line from our friends at MAPsignals that we thought perfectly encapsulated the moment we’re in – “Bears have correctly predicted 100 of the last 10 bear markets.” To put that in even more perspective, keep in mind that, on average, bull markets last 973 days, while bear markets last 289 days, according to FactSet. When data show strength, it would behoove us to not become a scared bear any earlier than is necessary. 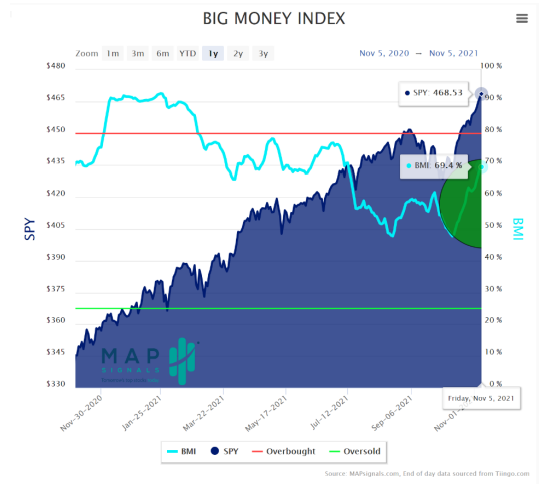 What that means is, according to MAPsignals, 70% of all signals in the past 25 days have been buying. What gives us confidence this isn't another cyclical rotation is that this rise in the BMI is not only due to increased buying, but also to dwindling selling: 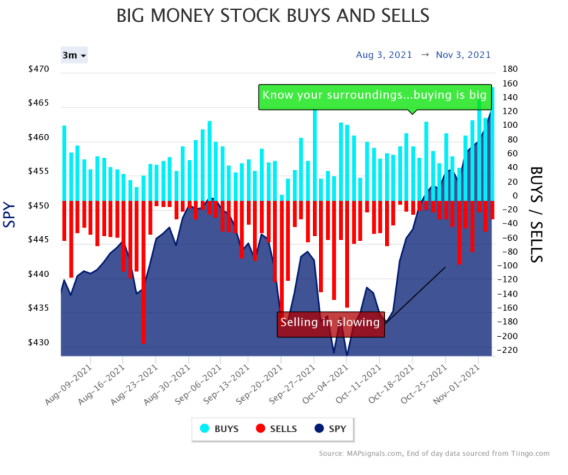 In addition, we’re even seeing the Russell 2000 index, which measures 2,000 small-cap firms, break out upwards after going nowhere since May. This again shows broad-based strength in the market, not money being concentrated on the FAANG stocks, or whatever they’re called after Facebook went Meta on us.

When small caps (i.e., the Russell 2000) emerge to the leadership position, historically that indicates an increasingly hot economy. Let’s remember some key things. Vaccines are even more widespread than ever, in the U.S. especially. The travel ban was lifted. Pfizer has an antiviral pill with encouraging results against COVID-19. And there are now indications that labor is beginning to “normalize” at some level. If that’s true, the workforce will power the economy further in 2022.

While, as usual, we are expecting a short-term consolidation after earnings season for the next couple weeks going into Thanksgiving. This scenario sets up for a strong market, with money flowing in, supported by record earnings (again), and favorable seasonality going into the end of the year. Of course, that assumes no black swans arise.

We would be remiss if we didn't speak briefly on the fact that the House of Representatives finally passed a $1.2 trillion bipartisan infrastructure bill. It could help keep the market elevated while frustrating those cash-rich investors looking for a meaningful 3-5% correction to put money to work.

This new spigot of government spending is on the way. In our opinion, it’s a good bet that materials, metals, transportation, and other industrial stocks will experience some rising fund flows in the coming weeks.

As we’ve mentioned, passing an infrastructure deal is about 30 years overdue. This piece of legislation was necessary, and that's really not up for today for debate. Now our focus will be on making sure the money is spent wisely and intelligently, as the execution of this bill requires strong stewardship.

For clarity, here is how the spending will be parsed out:

Here are the largest items accounting for $25 billion or more: 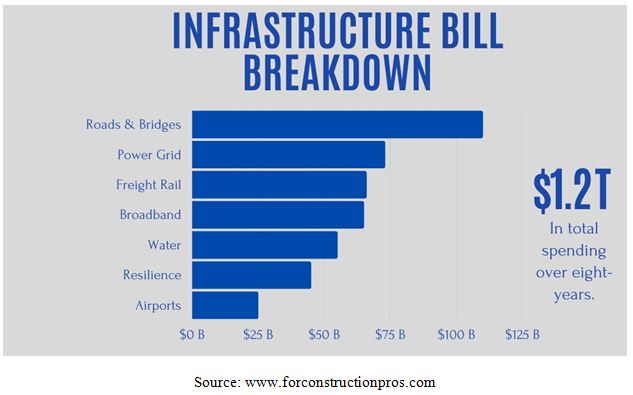 What's most intriguing is, that while there are areas of the market that are overbought from a technical basis, there are many great companies in steel, renewable grid construction, clean water, rail car manufacturing, engineering, paving, heavy equipment, and more, that have been lagging the overall market and are nowhere near being technically overbought. While there are some stocks trading at new highs, the majority within these sectors have vastly underperformed the most popular growth stocks this year.

In our opinion, if the bidding process is aboveboard and transparent for project spending, there's a lot of good that will come from this effort, and it will create investment opportunities. Additionally, the infrastructure initiative in the U.S. could spark similar spending efforts in other developed and developing nations.

Frankly, it wouldn't be a surprise if these infrastructure sectors outperformed in the next leg of the bull market. So, we're keeping a close eye on these opportunities within our equity models.