Earlier this year we discussed Cornerstone’s philosophy on goals-based planning and how our Road Map 360 process applies those concepts. In that post, we mentioned some (in our opinion) outdated rules of thumb in retirement planning.

Based on feedback from that writing, we’re going to deconstruct some antiquated retirement philosophies one-by-one. So now we’ll focus on a strategy we’ve been asked about a lot – the 4% Withdrawal Rule. It was developed in the 1990s and we believe it’s obsolete in today’s dynamic, comprehensive, and goals-based planning process.

What’s Wrong with the 4% Rule

Simply put, we don’t think the complexity of distributing assets for income in retirement can be displaced by simple rules of thumb. When building retirement savings (the accumulation phase), portfolio diversification and consistent account contributions typically serve an individual well. But when it comes to drawing down a portfolio, simple rules are deeply flawed due to the dynamic and changing nature of the typical person’s distribution timeline. Investors who choose to follow such rules of thumb do so at their own peril.

The 4% Withdrawal Rule suggests a simple way to draw down investments is to withdraw 4% during the first year of retirement, then in the following years merely adjust that withdrawal amount in line with inflation (we’ve heard that word before, haven’t we?). It became popular in the mid-1990s due to the financial industry and popular media touting the strategy. Thus, it turned into “conventional wisdom” and dictated the retirement income path for many people.

But in our opinion, the 4% Rule often leaves considerable money on the table, robbing people of the retirement they deserve. Retirement income planning requires changing sophistication, which the 4% Rule lacks. You must account for the full range of income inputs, and there are likely more than you think.

Doing so gives people a better understanding of their situation. They realize they may be better off than they thought they were, which breeds confidence to enjoy retirement.

The 4% Rule may provide (false) confidence, but ultimately, it’s misguided in today's changing environment. Here are three primary reasons why.

In many retirement income scenarios, it may be perfectly safe for someone to withdraw more money at age 80 than they did at age 65. This may seem counterintuitive. But hear me out.

The chart below illustrates the dynamic relationship between longevity and withdrawal rates. It shows what the withdrawal rate can be at various levels while still maintaining sustainability [Note: for the purposes of this analysis, “sustainability” is the estimated chance a portfolio would survive a given withdrawal plan to the end of (or past) the corresponding planning horizon. Put another way, it’s the probability of success given a certain withdrawal rate.]. 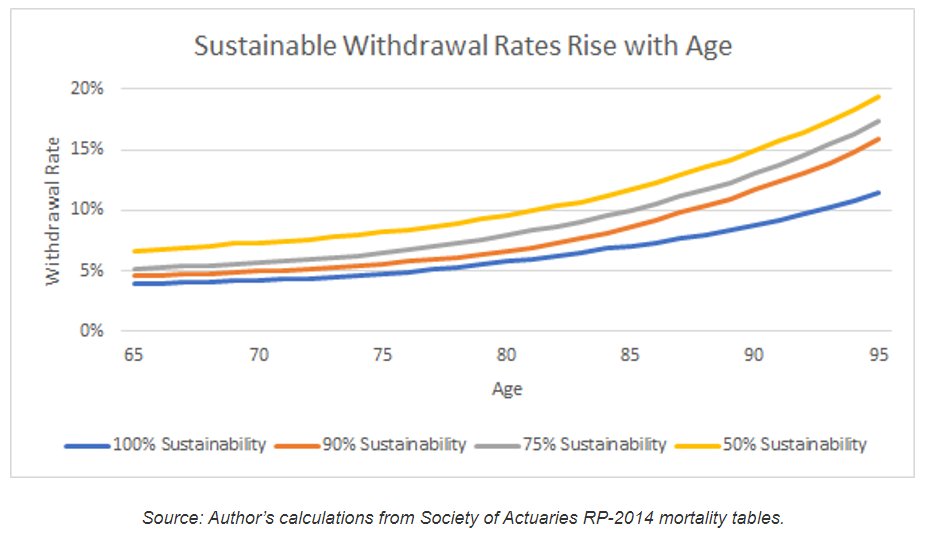 A problem with the 4% Rule is it’s static. You start at 4% withdrawals, then 20 years later, you’re still at an inflation-adjusted 4% withdrawal rate. But, as you age, you minimize longevity risk because you’re getting older. With less longevity risk, you can withdraw more money sustainably from assets.

As you can see, the sustainability line arcs upward. For example, if an investor planned to retire at age 65 and felt comfortable knowing there was a 75% chance their estate would last 30 years, the investor could start retirement with a 5% withdrawal rate.

That’s odd already to a 4%-er because it’s much higher than their rule suggests. And it’s a huge problem because the 4% Rule overlooks the fact that investors can increase their withdrawal rate as they agewithout taking on more risk.

There is a mismatch between the 4% Rule and the spending trends of actual retirees. As a result, the 4% Rule locks retirees into maintaining the same purchasing power throughout retirement. But real life doesn’t work that way. Retirees don’t need as much spending power when they’re older.

Research presented in the Journal of Financial Planning shows retiree spending decreases with age. For those who don’t want to read the paper, researchers found retirees often spend the most in early retirement, followed by a long period of decreases in inflation-adjusted spending. Toward the end of life, there may be some increase in their inflation-adjusted spending for medical reasons. But overall, retiree spending decreases with time. It’s apparent in this chart:

This is goals-based planning in a nutshell.

As you can see in the chart above, planning for realistic spending needs goes a long way towards providing more income to individuals in the early phase of retirement, when they need it most for travel, purchases, and so on. But this type of dynamic, goal-based planning requires moving beyond simplistic rules of thumb.

Now let me provide a personal, anecdotal example. I think it crystalizes the data perfectly.

My grandmother recently passed away and I was the executor of her estate. She was in her 80s. In the last seven years or so, she hardly spent any money. Before that, she went on cruises, loved the casino (slots especially), bridge tournaments, played golf, and all sorts of other stuff. That was when she was in her 60s and 70s. When she contracted Alzheimer’s disease, her activity slowed down. Her spending did too, except for health care expenses.

That type of scenario is more realistic for people than a constant spending rate over time.

The 4% Rule fails to acknowledge that non-portfolio cashflows are typically a major source of retiree income. For example, income sources like Social Security, pensions, rental properties, part-time jobs, house downsizing, inheritances, and so on make the actual cash flow picture for most families quite complex. It’s one reason we frame this phase of life not as retirement, but as “work optional.”

Below is a hypothetical example of income for a retired couple, Mary and John. It assumes part-time work for five years, a pension, and two Social Security income streams starting at different ages.

At first, only portfolio withdrawals and part-time work are used to fund retirement income, leading to an initial 9.8% withdrawal rate (more than double 4%). As Mary’s Social Security income and John’s pension kick in, annual portfolio withdrawals decrease to approximately $79,000 and $63,000, respectively, per year.

After a brief increase in withdrawals when John stops working part-time, his Social Security begins, and portfolio withdrawals are further reduced to $46,000 per year. Because of reduced goals-based planning needs, withdrawals continue to decrease in real terms, going as low as $9,000 per year later in the plan.

Therefore, the complexity of these different cash flows and their timing makes following a fixed withdrawal rate rule pretty much impossible and a fool’s errand. This is why we believe one of the greatest values added to any household is dynamic, goals-based retirement income planning. Income distribution is the most complex aspect of the retirement puzzle and requires complex, dynamic planning, not simplified rules-based thinking.

Instead of the usual detailed look at our trusty Big Money Index (BMI) from MAPsignals, which tracks “big money” and institutional investor activity, we’re going to do a quick-hit recap and dive deeper in a future post. For now, we want to point out how market data, even after a historically great October, still show strong tailwinds for the remainder of the year.

What do we mean by historically strong October? The four indexes collectively rose an average of more than 6%, according to FactSet:

We understand this might make some people weary or concerned about the next two months. How can markets follow up that performance? Well, based on both current and historical data, we don't think fear is warranted. As you can see, the BMI is still rising: 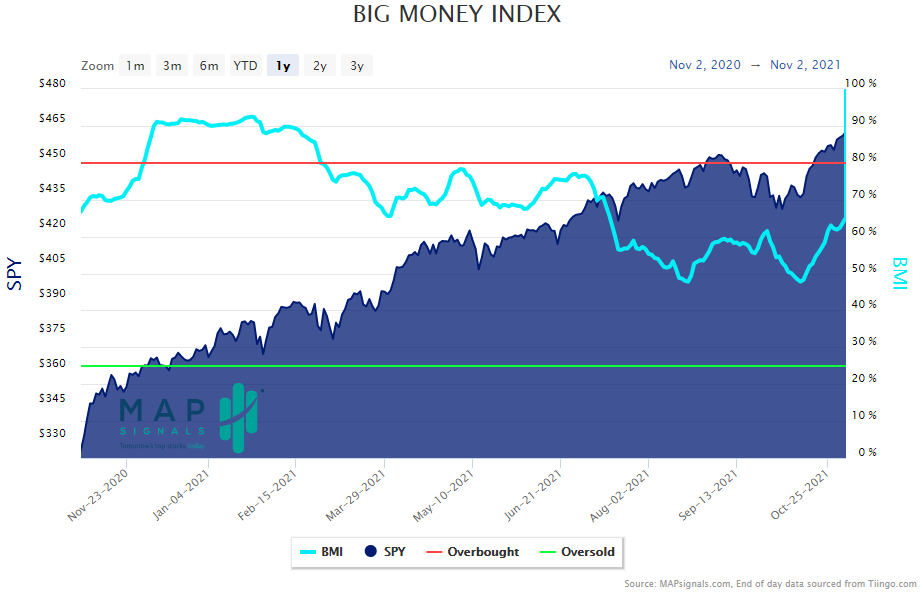 From a historical standpoint, more good news is that November is another seasonally strong time of year. In fact, since 1990, it’s the strongest month on average for both market performance and the BMI: 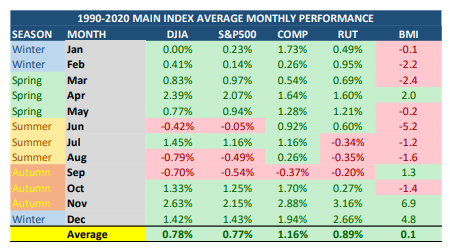 So, in short, while historical performance does not guarantee future results, the current strong buying and strong seasonal data provide us confidence as we exit another blockbuster earnings season. More to come later – stay tuned.