A Stabilization in Sight?

It may be tough to believe, but we’ve begun to see some positive market action and favorable economic news (contrary to popular belief). In what’s perhaps just an interesting coincidence, this all coincides with the trusty Big Money Index (BMI) from MAPsignals, a 25-day moving average of “big money” investor activity, bouncing off the oversold 25% indicator: 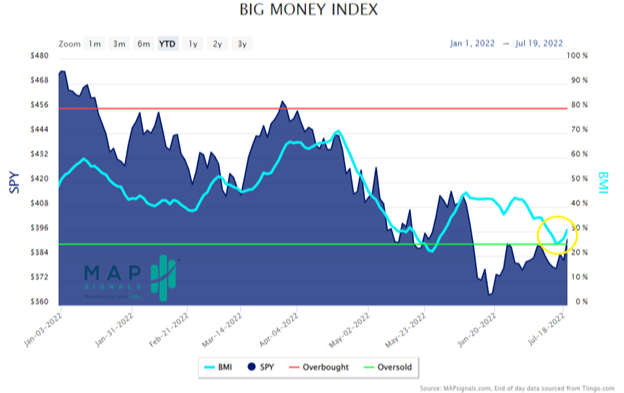 Is this another fake out for investors, like in May? Or is it a base for progress going forward? Well, our best guess at this point is this washing machine action (like we saw last summer) may continue through the third quarter, creating stabilization going into the fourth quarter. Let’s examine this concept through three lenses – inflation, technical analysis, and markets.

After further review, last week's inflation report needlessly spooked the market. While the headline consumer price index (CPI) number seemed outrageous at 9.1%, the core CPI (inflation excluding food and energy) only rose 0.7% in June and “just” 5.9% in the past 12 months. This continues a trend of the core CPI being reduced since peaking at 6.5% in March: 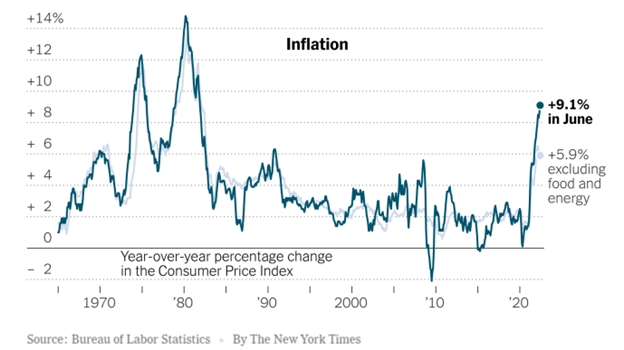 Obviously, we don't want to discount energy and food cost hikes. So, it’s a good thing that we expect the next CPI report to begin showing a decrease in energy costs like we’ve begun to see at the gas pump over the last two weeks.

One other interesting positive economic data point from last week's news cycle came from the retail sales report. The Commerce Department reported that retail sales rose 1% month-over-month in June. This runs counter to the idea that core inflation can't come down while consumer spending remains strong. The June retail sales report paints a picture of a still healthy consumer, which should allow for some upward revisions of second quarter GDP estimates.

Moving to technical market analysis, it's becoming apparent that “someone” or a lot of people are buying the dips, as we have not made new lows for four weeks. And the pressure on stocks from Treasury yields and high commodity prices has eased.

While the churning nature of the market has made investors queasy, the fact remains that we haven’t seen new lows in a month. It’s true the ride has been bumpy, but the trend has not moved excessively downward.

Technically speaking, this type of environment can create a rebound for stocks all the way up to the 200-day moving average. Should that occur, it would constitute a nice intermediate-term bottom, or what we might call “a” bottom, if not “the” bottom. In our opinion, for us to see “the”” bottom and more of a long-term bounce after, we need a dovish pivot from the Federal Reserve and, optimally, an end to the hostilities in Ukraine.

The most recent rally’s attempt at a market lift saw its big test begin around Wednesday of last week, and it will continue this week. This chart, which is a technical analyst’s dream, says it’s “make or break” time for the S&P 500: 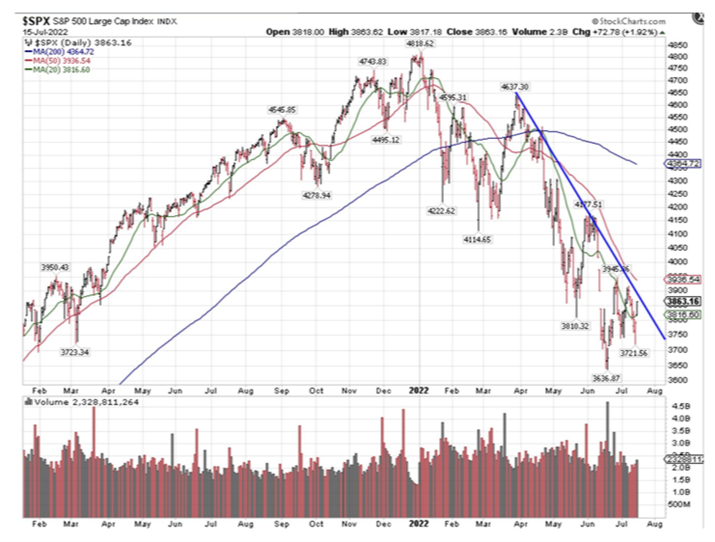 The reason we say Ukraine holds such an important position from a technical standpoint is that it’s still a major driver of financial markets. A one-day spike in oil, natural gas, or food-based commodities prices in Ukraine can override a legitimate bottoming out process for stocks elsewhere.

For example, see the natural gas situation in Europe, where Russian president Vladimir Putin could leverage natural gas pipelines as a weapon to fight sanctions. This is the main reason the Euro is now below parity with the U.S. dollar.

While this potential Eurozone crisis creates a global risk, it’s another example of how much better the U.S. economy is comparatively to the rest of the world. This is especially true given how much of a better financial condition U.S. corporations and consumers are in from a recessionary risk standpoint compared to prior recessions.

As mentioned, within core CPI we're seeing positive momentum downward since March to the most recent reading of 5.9%. While real inflation still lives in energy and food prices, as we saw the market digest the core CPI readings two weeks ago, returns were positive. We believe this is the market starting to believe there really is light at the end of the tunnel as inflation moderates outside of food and energy, which should begin to decrease as more data emerges.

Surely readers have noticed over the last month that there’s been relief at the gas pump. As of this writing, the national average price of a gallon of gas dipped below $4.50, from a peak of $5.11:

This is because oil peaked around $120 a barrel, falling to roughly $95 per barrel over the last month or so: 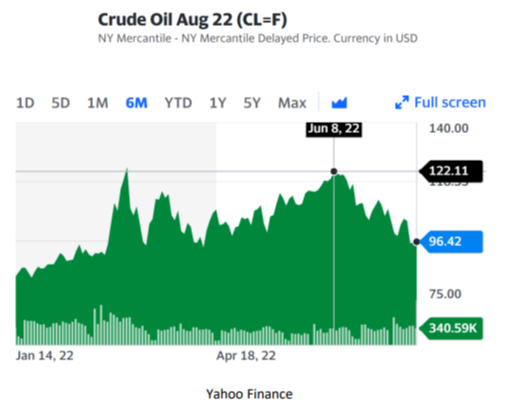 While we acknowledge that food price normality is still hampered by the Ukraine conflict (Ukraine supplies 35% of the world’s grain), we can't forget that supply chains are still coming back online. That should help mediate food inflation going forward.

As bad as the headline CPI number was a couple weeks ago, remember that it’s a lagging indicator. Looking forward, there are plenty of indications we’ve already hit peak inflation.

We can see evidence in the housing markets:

These signs point to the final bits of financial excess working their way out of the system.

What We’ve Been Through So Far

Now let's revisit the concept of “ghost tightening” and how it has unfolded so far.

First, around the beginning of the year, the Fed used harsh language to diffuse asset bubbles. Risky assets like growth stocks and cryptocurrencies fell in value.

Then around spring, stocks of all varieties came under heavy selling pressure and markets tumbled. In May, margin balances were wiped out, deleveraging markets (this is also when the BMI went oversold, and the S&P 500 experienced a short-term bounce of almost 10% soon after).

Thus, the tightening continues, all while interest rates remain below the historical average of 3%.

But there’s one big unknown that’s still playing out – consumer debt. If there’s a potential crunch there, it could spell bigger trouble for economies and markets. Time will tell.

The goal of this tightening has been to try to engineer a “soft landing” that many don't think is possible. But as we've been analyzing this the past couple weeks, we started to realize that even if we enter a technical recession (two quarters of economic contraction), we’d be receding from growth that was possibly falsely engineered with easy money…and maybe shouldn’t have occurred anyway.

This makes us significantly less fearful of the “r word” – recession.

The Fed doesn’t want to raise rates too much because of recession fears and our $30+ trillion national debt. But there is still some room for rates to tick upwards. So, we think the next two rate hikes will bring us up to around 3% (or back to average).

The consumer debt and interest rate unknowns will play out over the third quarter, meaning choppiness will probably continue. But we think it will lead us to a fourth quarter where rates stabilize, inflation subsides, and energy prices begin their usual seasonal drop. We also think food production and supply chains will be much better off by then.

Also remember, there still aren’t many alternatives for investors other than the U.S. equities markets. American markets are suffering, but still reigning supreme. And even with higher interest rates, bonds can’t overcome the negative real rates of return due to inflation.

So, let’s get through the seasonal volatility of the summer. The fourth quarter should be worth the wait. Until then, I suggest stepping outside and enjoying the warm weather, like many of the professional traders are doing.