The State of Global Income Inequality

I want to talk about income inequality – but not in the way you’re probably used to hearing in the news.

Normally, income inequality is discussed along racial or gender lines. That’s an important discussion, without a doubt. But I’m talking about income inequality strictly on a statistical global level over extensive time periods.

Dr. James Gwartney from Florida State University has long specialized in comparative wealth and freedom between nations. To measure global income equality, he uses the Gini Coefficient, which was developed by statistician Corrado Gini to measure wealth distribution among a population.

The measure ranges from zero to one, with zero being maximum equality and one being maximum inequality. In other words, the higher the number, the more inequality exists in the world.

The narrative we hear a lot is that inequality is soaring. It’s the wealthy against the poor in this world in a winner-take-all battle. You’re either a “have” or a “have not,” there is no middle ground.

But, in modern times, we’ve never had as much global equality as we do right now when it comes to income and wealth. This chart illustrates the path towards greater global equality we’ve been on for some time: 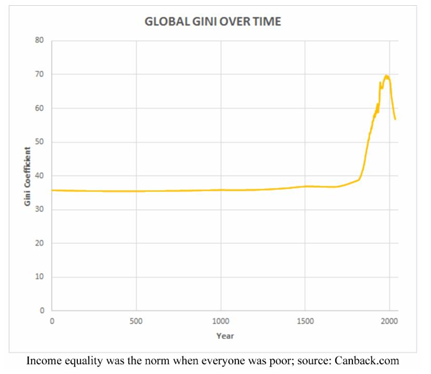 Some key generalities regarding this measure must be pointed out.

First, small countries tend to have less inequality, while larger ones have more because of population size.

Also, historically, homogeneous countries have greater income equality over time. Japan is a good example of this phenomenon.

And lastly, poor countries tend to have less inequality because the median level of wealth is so low in general. In other words, nearly everyone in the country is poor.

Understanding all that, let’s look at some of the historical Gini Coefficient values.

In 1920, the cross-country Gini index stood at .235, which is quite low. But that’s because the entire world was poor.

On the contrary, the peak value of .604 came in 1980, after the full realization of the Industrial Revolution and vast economic liberty.

Since then, it’s dropped to .466 (as of 2015), which shows more equality worldwide. That measure is also better than a century ago, when the cross-country index stood at .495.

All in all, things have been getting more equal since 1980. Are things perfect? No. But the situation is undoubtedly improving on a global scale.

Historically poor countries like China and India grew quickly, while developed nations grew more slowly. Throughout it all, per capita wealth grew almost across the board.

In fact, the percent of the world population in absolute poverty – defined as $2 per person per day, adjusted for inflation – is just 8.5 percent today, when it was 60 percent in 1980. That is an incredible decrease!

According to Dr. Gwartney, the increase of free market economies, along with transportation and communications revolutions, have driven the slide. The cost of moving goods worldwide has decreased, prompting a massive transfer of wealth from richer to poorer countries, which allows them to grow.

The main point is, while we all strive to do better, there are fundamental signals and noise. And fundamentally, the data show people are better off today than they were even a few decades ago.

We believe that must continue, and that it can by focusing on the true positives and not continually railing on the negatives.