The Rush to Quality

We expected some market consolidation after earnings season. It’s a fairly typical occurrence. And last week in the shortened holiday trading week, that consolidation arrived and was exacerbated even a little bit more (writers note: post the original draft the markets saw additional volatility in Friday’s shortened trading day due to new COVID concerns out of Africa).

This created a reversing trend in MAPsignals’ trusty Big Money Index (BMI), which measures “big money” institutional investor activity. The cause was yet another sector rotation, which has been one of the market’s stories of 2021 (we dedicated space in several posts to rotation and even did an entire post on it). It’s put stocks under pressure and caused the BMI to dip: 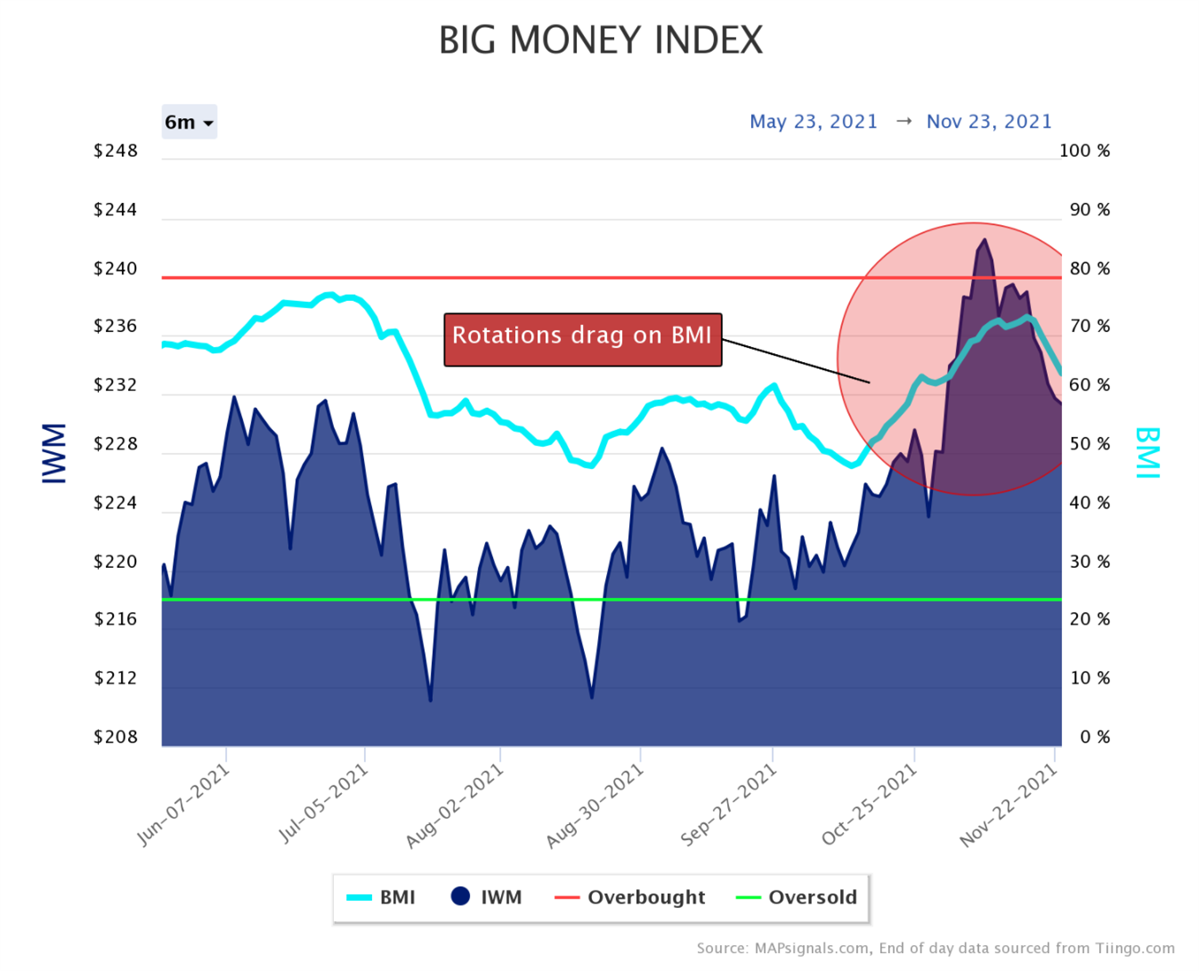 The dip has been swift too. That was undoubtedly fueled by big selling days like last Monday, which was the largest sell day in two months: 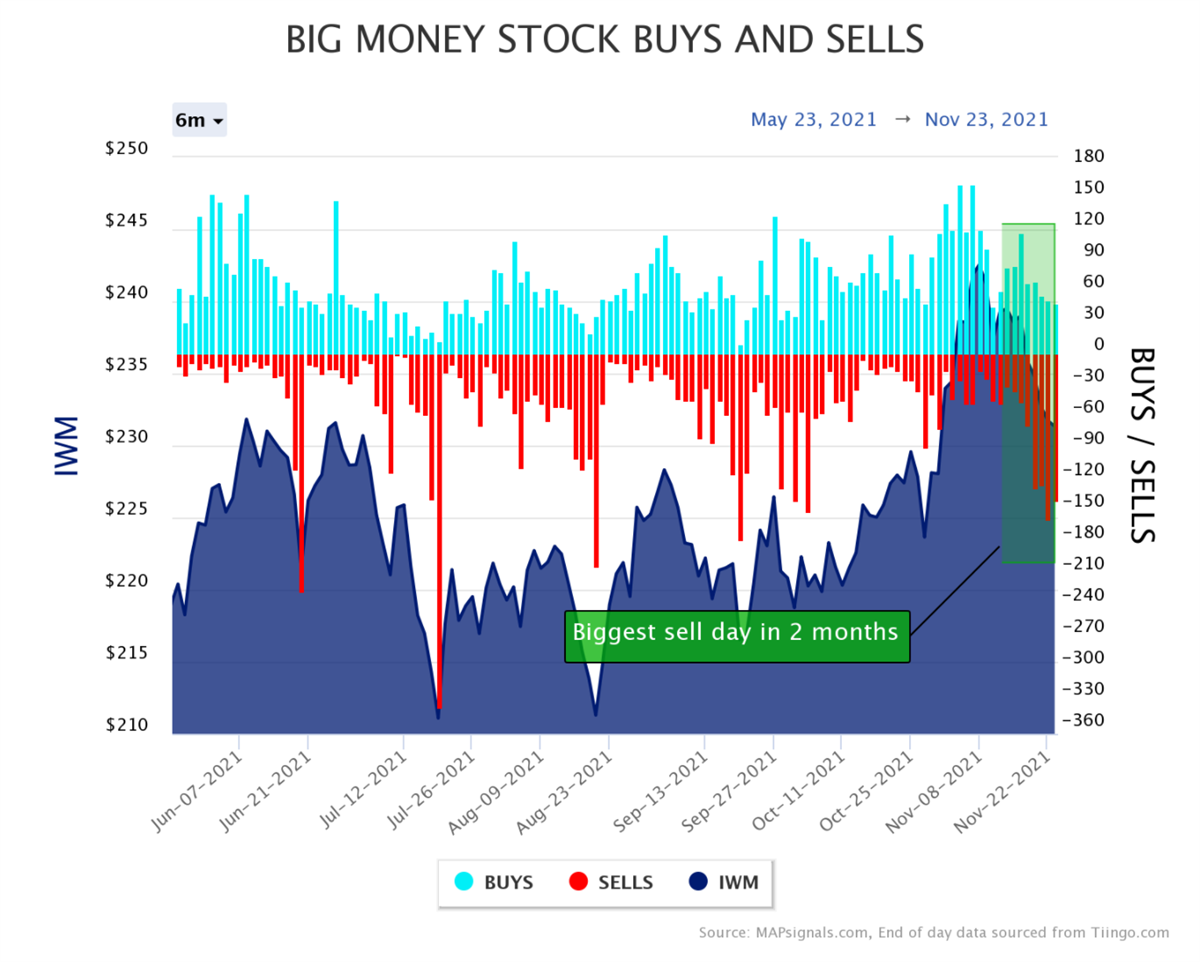 This is also being reflected in the aggressive recent selling last week in exchange traded funds (ETFs): 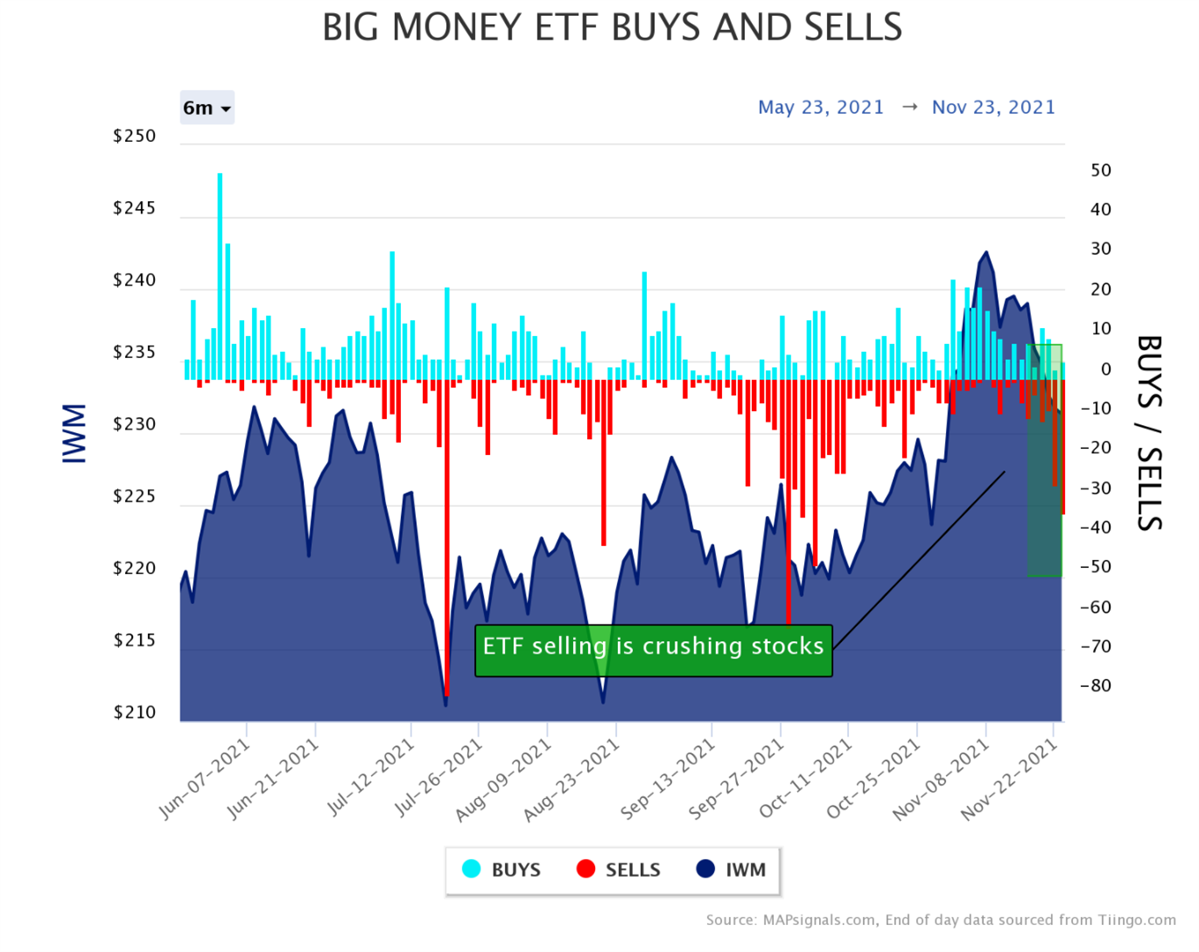 For further perspective, let’s drill down into the market sectors. In the below table, you may notice an unfamiliar scene. Typically, the green and red bars, as well as the resulting yellow highlights, are not as evenly distributed as they are currently. There are multiple sectors with equal amounts of large buying and large selling (the yellow highlights). Even though we would consider 2021 the year of rotational movement, this is some of the most aggressive weekly cyclical rotation that we've seen this year, which makes this sector analysis unique:

We've even seen something that feels like it hasn't happened in years – recent aggressive selling creating a pain point within technology: 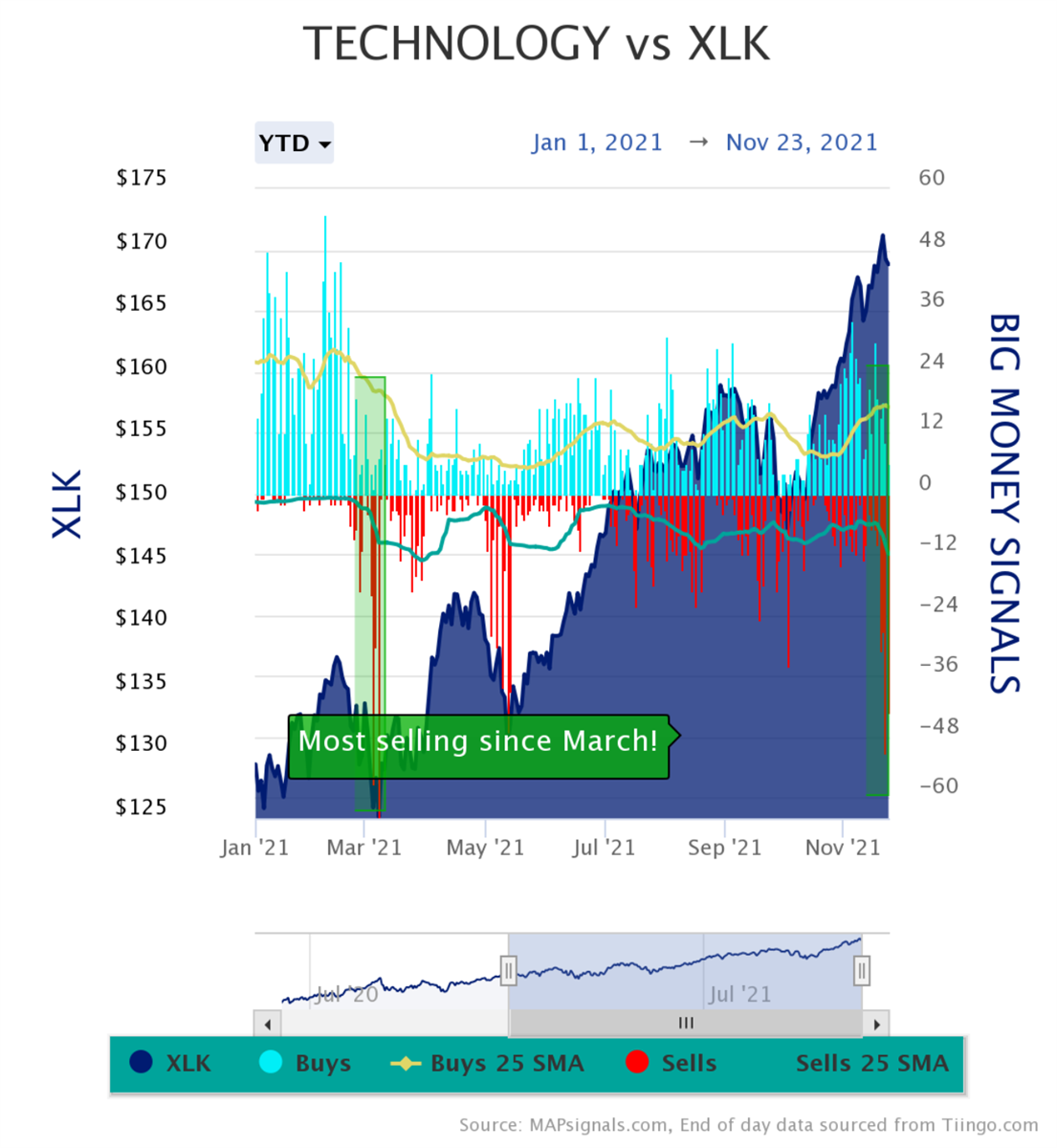 So, that’s a decent amount of unfavorable news. However, not all is bad.

Remember, aggressive overselling in an otherwise healthy fundamental market often creates opportunities. For instance, look at technology stocks. The last time we saw selling of this size was back on March 8. A month later, the sector was up 11.83%.

That drop and subsequent rise that occurred in tech included well-known, big, high-quality companies. So, aggressive overselling can negatively impact even the best stocks.

When that happens, as investors we need to see it as an opportunity. In other words, aggressive overselling of quality stocks can effectively be a fire sale because the values of such stocks usually recover, often quickly. Thus, there may be some good entry points for investors when aggressive selling overtakes stocks with otherwise strong fundamentals.

To expand on this point, since October there's been a focus on buying high quality stocks. MAPsignals data from October to last week showed 126 companies displayed aggressive buy signals, with many of them appearing multiple times (meaning they were bought over and over). That's a good sign in terms of quality.

Of those 126 signals, 44 had MAPsignals fundamental scores above 60%. That means 35% of the stocks bought have extremely desirable fundamentals from a quality perspective. That is a very high number.

This gravitation to quality should be familiar for us. After all, we just did it at Thanksgiving dinner.

If your Thanksgiving table was like mine, there was probably ample demand for the best side dishes (in my opinion) – stuffing, green bean casserole, and so on. Meanwhile, there was likely a bunch of that pink jiggly thing with floating mystery stuff left after dinner (or mac and cheese if you’re Matthew Judon of the New England Patriots).

Well, the “big money” is doing the same thing with stocks. These investors are buying the quality equities (the stuffing with gravy) while passing on the lower quality ones (the pink jiggly thing). Despite sector rotations, Bloomberg pointed out how investors are rewarding companies that make money (i.e., profitable firms) relative to companies that are unprofitable at the highest rate in almost two decades. 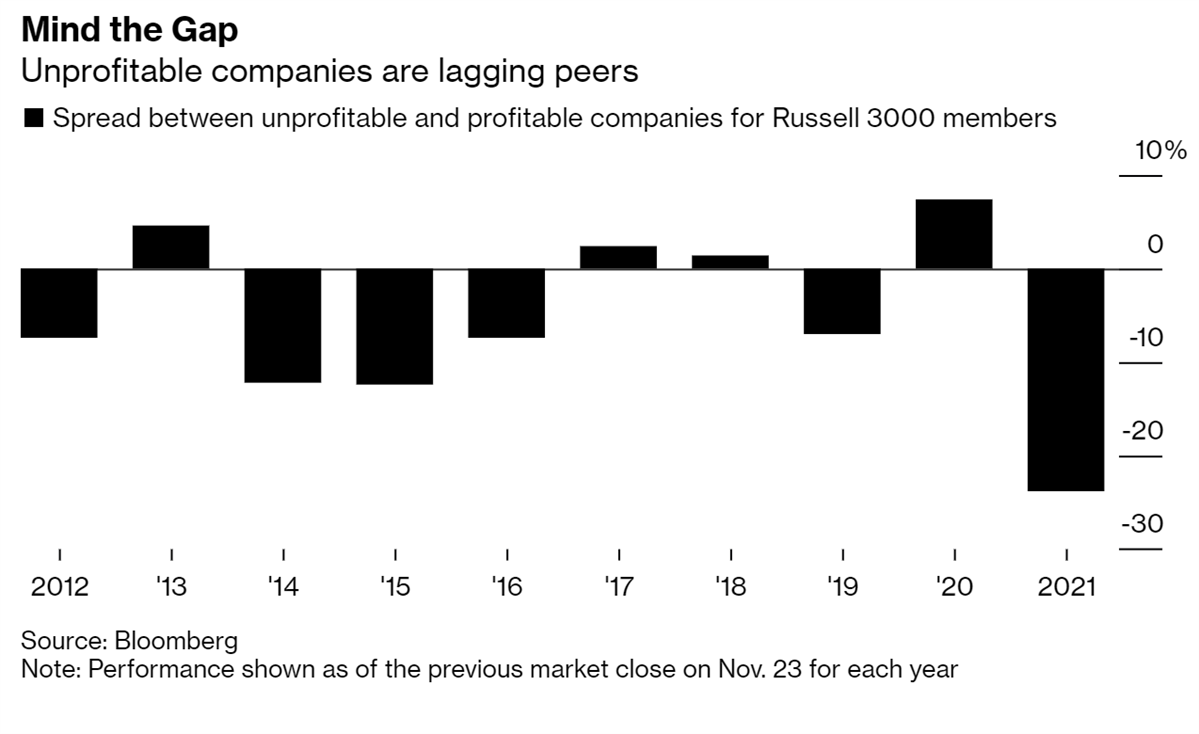 This is painting a picture that unprofitable stocks (i.e., the Redditt picks du jour and other meme stocks) have a tough road ahead of them. The pink jiggly stuff knows all about that.

While such conceptual stocks can have a place in a portfolio, they don’t seem like they’ll rise as they did last year, according to these data. This year’s spread is a reversal of three of the past four years, when unprofitable companies outperformed their profitable peers at this point. That group returned about 20% at this time last year, beating profitable companies by more than 7% over that stretch.

The dash to quality is also appearing in initial public offerings (IPOs). This year, profitable U.S. IPOs are up an average of 16% from their offering price, compared to a gain of 12% for their money-losing counterparts.

In summary, we expected consolidation. And as the rotational beast growls again, we're finding it’s more important to focus on quality and profitability than at any time in the past three to four years. This trend reinforces our thesis on the suitability of dividend growth stocks, which tend to be profitable, stable, and have growing earnings.

It’s clear the rush to quality is on. Could you please pass the stuffing and gravy?