Mid-Year Review and Second Half Outlook

We just completed 2021’s second quarter and have reached the midway point of the year. Speaking strictly from an investor standpoint, it’s been a hell of a ride, a hell of a quarter, and a hell of a six months.

In review, 2021 so far has been good for investors, as the year-to-date performance indicates:

Again, regardless of the day-to-day news cycle, it's been a hell of a six months, after what was a HELL of a year.

What we have seen over the last few days is quarter-end window dressing, which our readers know happens. But going forward, we’re expecting another blowout earnings season, which again isn’t a surprise to our readers.

The question is, what will investor psyche be like this time around? Will it be one of weakness, as in the second quarter? Or will the market continue to plow forward?

Recently we've talked about the risks in the market, but as the second half of the year approaches, we want to talk about what’s good, because that’s what the current data support. A theme we keep hearing is “Roaring Twenties, Round Two,” which implies we’re entering a period similar to the 1920s, when America’s economy grew at an historic clip.

It could be true.

The world is reopening. People have money to spend. Pent-up demand is going to lead to incredible earnings growth in the second quarter. In fact, we’re already seeing it, as MAPSignals’ trusty Big Money Index (BMI), which tracks institutional investor activity, showed 333 buys and 74 sells last week. That moved the BMI to 77%:

While we aren’t expecting the BMI to go overbought in the next week, we could reach that state soon if this trend continues. But does that mean the market is doomed to drop? No.

This confidence is reflected in continued sector strength across the board, as every sector is above 50 in our weighting system, which is bullish in nature: 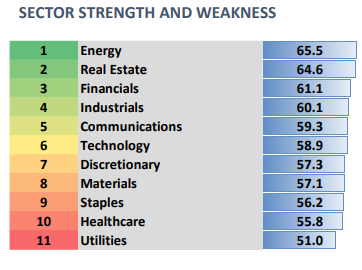 Keep in mind, the BMI is a 25-day moving average and it’s continued to tick up: 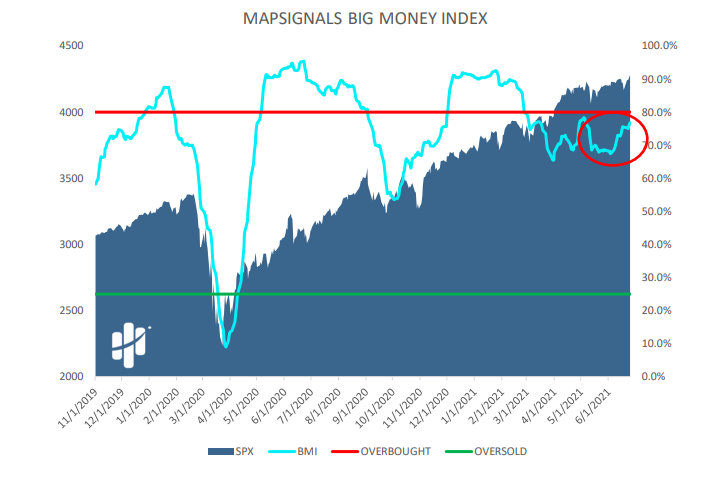 As you can see, buyers are slowly lifting the BMI. And for the second week in a row, technology and energy stocks are leading the charge. The top five sectors by score overall are energy, real estate, financials, industrials, and communications. And most importantly, sellers are nowhere to be found (except somewhat in utilities, where defense is the name of the game):

All that lays the groundwork for how we need to look at the second half of the year.

Quoting Team USA wrestler and Olympic gold medalist Jordan Burroughs, “The difference between the greats and the legends is their ability to focus for longer periods of time.”

To us as investors, that means we don’t want to get sidetracked by noise (e.g., the daily news cycle). As our readers know, data drives decisions at Cornerstone. So, over the next six months, we’ll continue following the “big money” data.

Looking back at the second quarter of this year, we saw loads of bad news. Despite that, the “new roaring twenties” theme persists. So, we thought it could be helpful to examine some distinct parallels between the present day and what took place 100 years ago:

But there are also some clear distinctions between the two eras that are important to mention too.

But most importantly, and this is a big takeaway for our midyear outlook, the economic impacts for both eras were significant. Life effectively stopped for many people. Schools, businesses, and restaurants shuttered in both scenarios. Travel stopped. Basically, everything went on hold as we waited for treatments and vaccines to arrive (thankfully, they did in both cases).

These comparisons are important because, while the 1917 pandemic was more severe, it paved the way for the most prosperous boom times in modern economic history. Following the Spanish Flu, the 1920s saw America’s economy grow by 42%.

That huge growth was caused by years of pent-up demand as consumers flooded the economy with cash when they finally could. Sound familiar?

This coincided with mass production pushing products into every household. In other words, supply caught up with demand. Sound familiar?

Also, modern automated and airline industries were born in the wake of the Spanish Flu due to technological advancements. Sound familiar?

Could we see this type of prosperity again? We think it’s possible.

First off, remember the stock market looks forward. Stocks tend to react to what will happen in six months to a year from now. Looking back, this is exactly what happened with “big money” investors when COVID-19 shut down the U.S.: 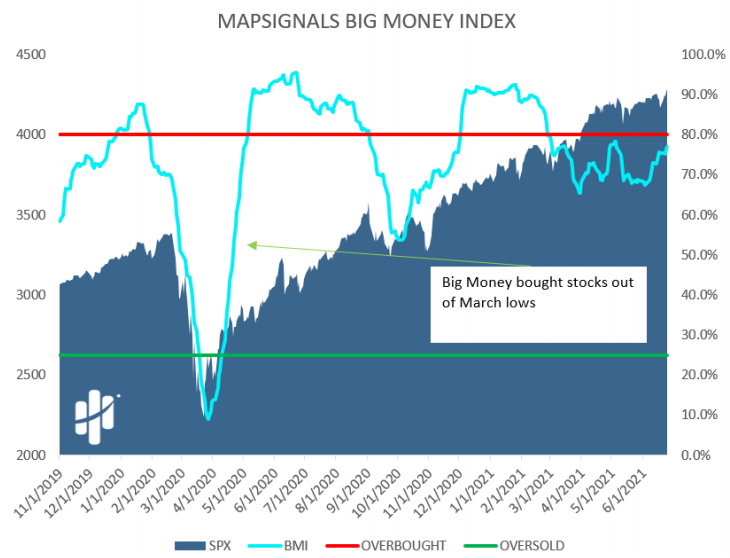 The question we keep hearing in the media and from clients goes something like, “But if the markets think ahead, stocks are already bought up to the level they should be, right?”

Stocks were purchased before a major economic recovery, and the S&P 500 has rallied an astonishing 90% since the March 23, 2020, low. This is what’s caused people to be alarmed. If the price-to-earnings (PE) ratio for the S&P 500 is already around 45, which is much higher than average, people think there’s no way it can go any higher.

Remember, when PE ratios seem out of line, they come back in two ways:

It’s simple math, and right now, it shows the second scenario is occurring. Therefore, the red herring of the trailing 12-month PE ratio is false.

To illustrate this, examine the second quarter earnings results for the S&P 500 (and remember the third quarter will likely be even better):

As earnings for the third quarter come out and we continue to receive sustained earnings surprises, that will continue to push down the forward PE ratio of the S&P 500. This supports the thesis that the market may be undervalued at current prices.

There’s further support in the continued buy signals we’re seeing in the BMI as well as the fact that interest rates will remain low, which is great for growth stocks. Money is gushing back into the economy quickly. There are waiting lists for restaurants and vacation destinations. Heck, even movie ticket sales are fast and furious.

And for anyone who says U.S. households will quickly run out of cash to spend, remember some key facts. For a decade, U.S. household savings rates hovered around 6-8%. But even as recently as March 2021, after months of above-average savings due to the pandemic, the rate was still an elevated 32.2%!

That money is eagerly searching for places to be spent. Normal economies don’t stop outright, but ours did. And now it’s coming back.

The best analogy we can come up with is the money being spent will make our economy like an oil tanker. It will take a while to peak, then a long time to slow down. It won’t all be spent in a quarter. This large accumulation will take a while to dwindle. That’s why the growth in the 1920s was so long – it takes time for economic resources (i.e., cash) to be deployed.

The bottom line is stocks should surge in the next six months or so, led by growth. So, perhaps the 2020s will roar as well.