But investing in equities is a little different – you only lose when you choose to sell at a loss.

That gives disciplined, long-term investors an out (and an advantage, in our opinion). Dips in value only become real upon a sale. Otherwise, all the downward action is confined to paper.

Speaking of selling, we saw more of it last week in the market. Buying was still ample, with 294 Big Money buys, though it was outweighed by 329 sells. Smaller stocks were hit again by sellers, while the bulk of buying took place in defensive sectors across market capitalizations. Thus, the market is in a somewhat defensive posture right now. 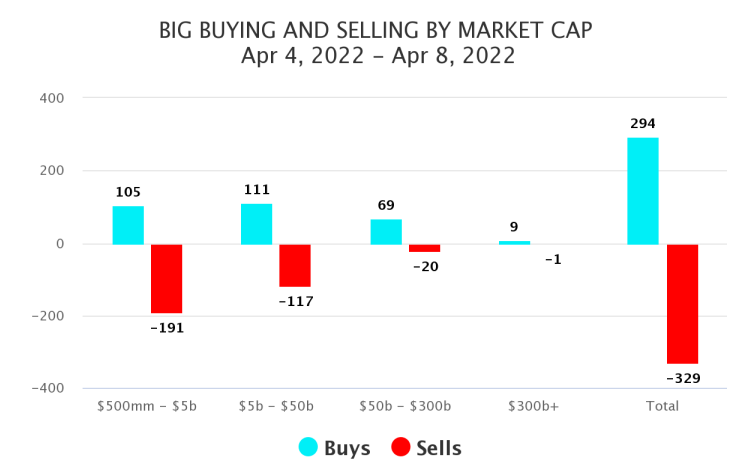 When it comes to investing in stocks, there are plenty of chances to lose. And with time, we can really understand how selling too soon is a big opportunity cost. When do we sell too soon? When we’re scared. So a simple rule is hasty decisions made out of fear must be avoided (simple to understand, not necessarily to follow).

But as mentioned last week, we're starting to see glimmers of positivity. The trusty Big Money Index (BMI) from our friends at MAPsignals, which tracks “big money” institutional investors, is at levels not seen since late last year: 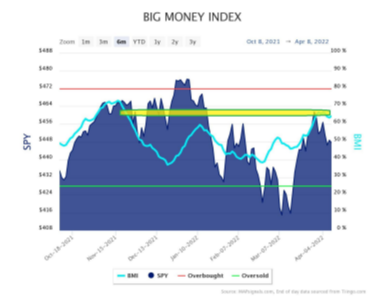 So, the selling wasn’t necessarily a surprise. Consolidation was always in the cards, as we warned last week. It’s continued since, which seemed to correspond to with March’s consumer price index (CPI) results being released.

While some think that this is peak inflation and things can only improve, that doesn't take the pain away from the fact that the CPI is up 8.5% from a year ago, while core prices (excluding volatile energy and food) are up 6.5% year-over-year: 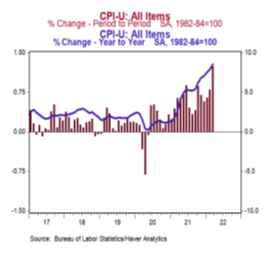 Energy alone is up 11%. And adding pain to the situation are real hourly wages – down 2.7% in a year (despite all the pay hikes):

The good news is that we are probably at or close to peak inflation, albeit we aren’t completely convinced just yet.

The bad news is that even if we see declines, inflation is very likely to remain well above the Federal Reserve’s supposed 2.0% target for at least the next couple of years. We believe that's what led to the consolidation last week, fortifying the market’s more defensive posture.

But now we're about to go into earning seasons. This is where the winners and losers are separated on an individual stock basis.

Broadly speaking, it’s nice to see the market has firmed up and money is flowing in. Still, it would be nice if the floor was higher, and the highs were nearing or even surpassing recent peaks. That would bring more investor confidence.

And the bulls would really run if sectors that led us higher for years broke out of their quagmires. But we're still seeing big buying in defensive areas like healthcare, staples, and utilities, with selling being consolidated in tech, real estate, discretionary, financials, and industrials:

A bullish sign is the decreased selling in tech stocks. It’s dwindling regularly, which is movement in the right direction (but we’re not all the way there yet). That's good because tech represents growth, and it appears the mammoth growth selling is over for now. But the bulls are still running in mostly defensive areas.

To wrap this up, we at CFS think the market will rise again at some point. And in terms of a focus, we prefer to bet on American ingenuity. But there will continue to be volatile days for investors. Those can be great long-term opportunities as high-quality stocks like NVIDIA Corporation (NVDA) are sold alongside the junk.

Therefore, we’ll continue to stay the course. We’ll be tactical in the short term when needed, as we have been this year in sectors like energy and materials.

Well, as our clients are aware, the CFS philosophy has been that traditional conservative assets classes, like bonds, can be actually be riskier than equities in certain environments. That’s proving to be accurate as interest rates rise.

To exemplify this, we've seen the benchmark 10-year Treasury note rise from 1.12% at the close on Jan. 8, 2021, to 2.71% at the close on April 8, 2022. That’s an increase of 159 basis points. This has resulted in direct downward pressure on the market value of par weighted prices of fixed income assets (the gray lines below): 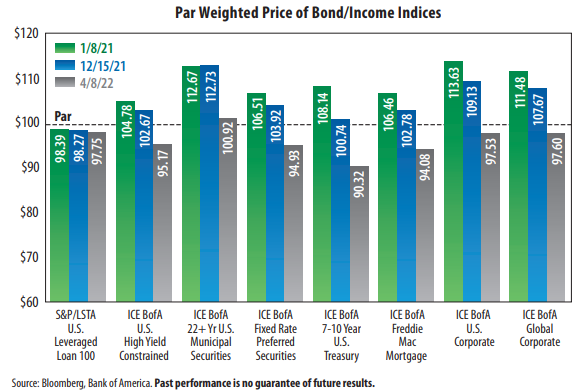 If you own those bonds, not only are you not getting paid anything on interest, but you're below par value almost across the board. And as interest rates rise, bonds you already own will further decrease in value.

It may surprise some to hear how bonds had a worse first quarter in 2022 from an aggregate standpoint than equities. And, as of April 12, 2022, the U.S. aggregate bond index is down 7.47%, per S&P Global.

This supports the thesis that, in this environment, traditional fixed income assets won’t be able to act as a conservative barbell diversification with equities, and instead investors should seek dividend-paying companies with strong balance sheets and free cash flows which also serve as the best hedge against inflation risk.

In other words, high-quality dividend growth stocks are the safest oasis currently.