Jobs, Markets, and Our Bullish Outlook

There is more data, but also steady uncertainty.

Markets gain and lose, but overall activity is mild, plotting no major course yet in our recovery.

And thus, we remain in COVID-19 limbo.

The severity of the economic damage is clear. For perspective, consider it took 25 months for payrolls to decline by 8.7 million, for a jobless rate of around 10 percent, in 2008.

Unfortunately, May’s report will likely be even worse. It’s difficult to believe $2.5 trillion in spending will offset even more than 50 percent of the damage.

That’s because promising money to companies to cover payroll expenses via the Paycheck Protection Program, but then not allowing them to open (or open only in a limited capacity), can only go so far. Many won’t survive. To truly drive economic recovery, revenue must be generated.

A staggering 33.5 million people have filed for unemployment benefits in the past seven weeks. However, the continuing claims are smaller.

So many people out of work is certainly not ideal. But the declining claim values show the PPP program and job creation in certain industries, like grocers and online retailing, are offsetting some of the damage.

We have a good idea of what the gross domestic product decline will be, but there won’t be hard data on that until late July. By then, we expect the economy will be expanding, albeit at a slow pace. In fact, we’re seeing light at the end of the tunnel in the increased high frequency data: 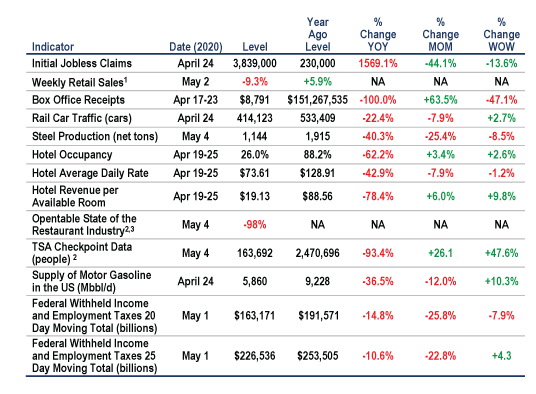 Even to the naked eye, those venturing outside are seeing more people and vehicles out and about. There’s more activity, including businesses readying to open their doors even though they’re not allowed to operate yet.

More data pointing to increased activity is also found in map application “routing requests,” which are tracked by Apple. In Mid-April, both walking and driving requests were down 60 percent from January 13. As of last week, they were only down 29 and 16 percent, respectively.

So, people are moving around. Investors should keep this in mind as we take on bad news in the coming days. There are bad things happening, but the high frequency data are showing that better days seem to be ahead.

First and foremost, it’s abundantly clear the Federal Reserve’s aggressive nature has provided a “put” underneath the market around the 2,600 level of the S&P 500. From a technical perspective, that’s where the long-term moving average sits.

As a result, a realistic floor seems to have formed. It sits about 7-10 percent below where we are currently. Any moves towards that floor will trigger further reinvestment of our cash positions back into the market.

We’ve discussed previously how the movements of “big money” via the Big Money Index and related buy/sell signals are indicators we consider too. The current index indicates we’re nearing overbought territory this week. But that average is skewed upward because of aggressive investor behavior that turned selling into buying.

This is further confirmed in the chart below. Selling has completely dried up. Buying is ticking up, but the overall percentages are still extremely low. That said, we’re seeing upward buying trends in technology, health care, and consumer staples, which is promising.

Simply put, last month’s huge rally was because sellers vanished. So, any further growth will be because buyers are reappearing in greater numbers.

All these factors combine to provide us a bullish outlook overall. Things will be slow, especially at first, but we’ll continue to grow. As such, we’re staying the course with our strategy to reinvest cash when the time is right.