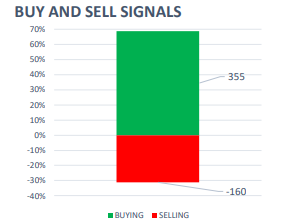 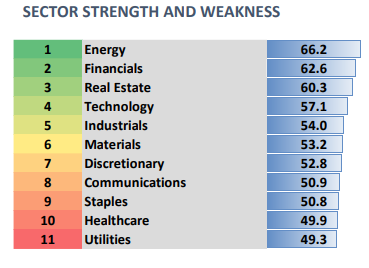 Our readers know how growth stocks have been especially mired in the mud for months. We can thank a lack of economic data and an endless stream of bad news on TV.

That all put pressure on great stocks throughout September. But, as earnings are coming out and blowing away estimates, the underlying data is turning and supporting the recent run up in stocks that we've been seeing, and expected, the last week or so.

Sellers are disappearing fast. And buyers are coming in aggressively. This is beginning to quickly lift MAPsignals’ Big Money Index (BMI), which measures institutional investor activity: 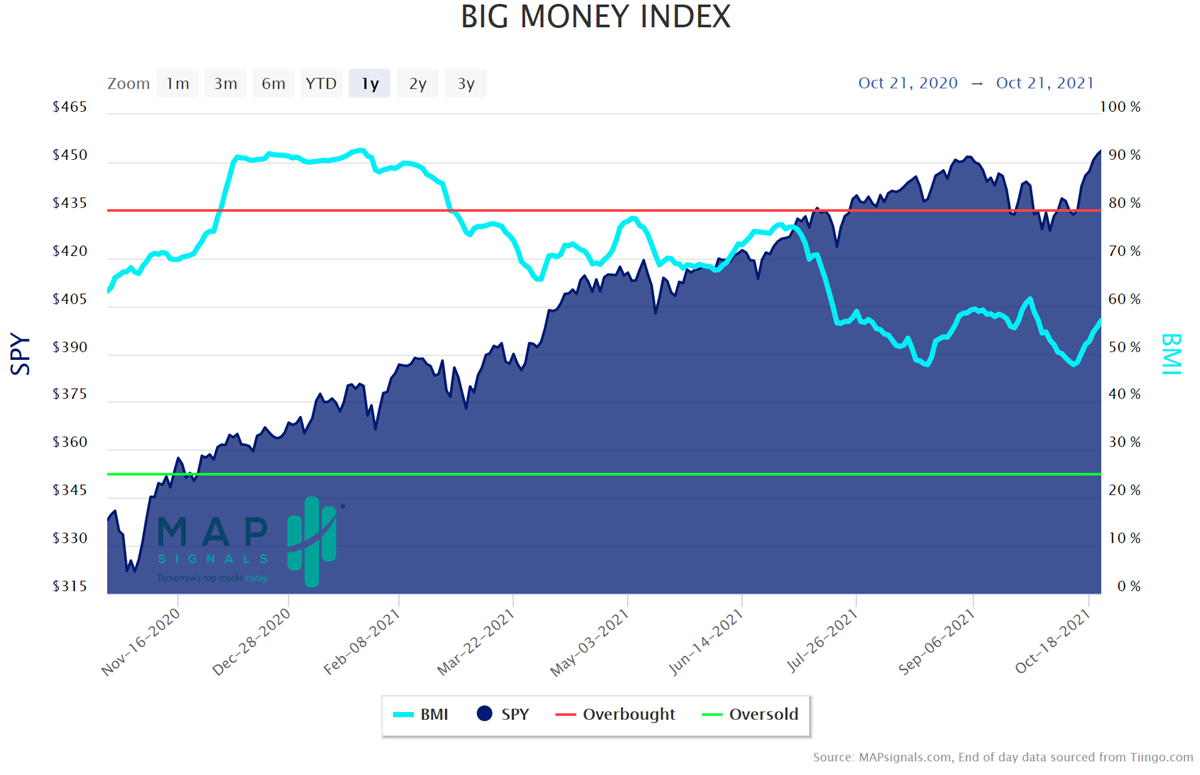 To put this in perspective, over the last week we saw 534 stocks make unusually large trading signals (366 were buys and only 160 were sells). This waning selling and fresh buying, as seen on the far right of the below chart, ahead of a seasonally strong time is creating a strong tailwind for stocks. 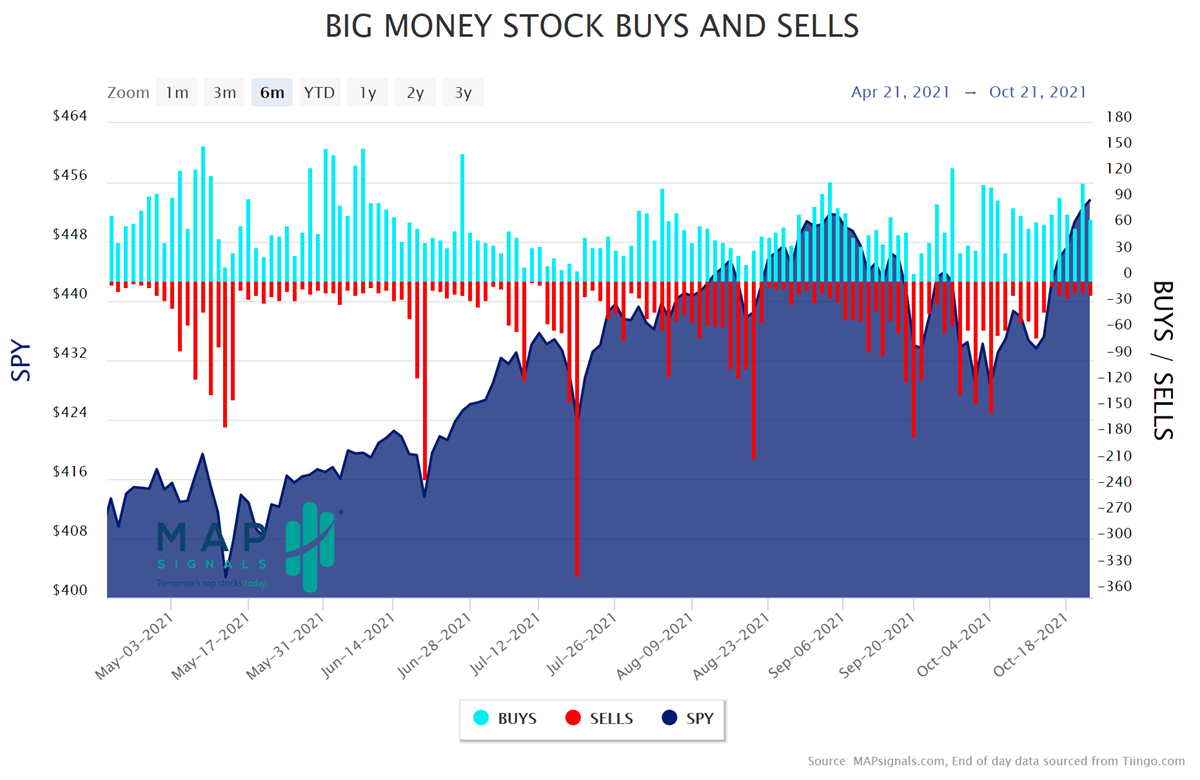 We can’t stress enough how timing is a fool's errand and winning is not guaranteed, especially on a daily basis. But this setup is strong for future returns.

Interestingly, there was another unexpected catalyst to support the recent buying. As we've all heard on the news, there are significant port bottlenecks and inventory scarcity. It’s caused a fear of shortages of everything from Halloween decorations to food to Christmas presents. But when we look at the data, there isn't yet proof the supply chain disruption is damaging the economy from purely a spending standpoint.

We don’t have to look any further than the retail sales report from two Fridays days ago. Retail sales rose by 0.7% in September, which was a huge surprise to the upside as the expectation was a -0.2% decline. Nearly every sector posted an increase in September. 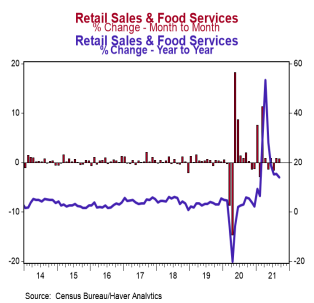 If we look at core sales, which excludes, vehicles, gas, and food services, retail sales rose 0.8% in September, along with a revision of August’s data to show a 2.6% increase. 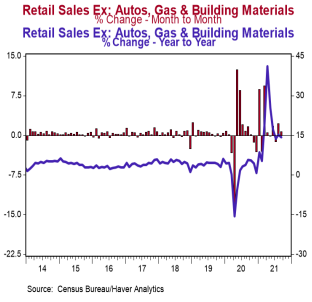 To put this further into perspective, the past 12 months’ retail sales have risen 13.9% (not adjusted for inflation). Obviously, economists assumed retail sales would decline in September due to supply shortages. But what is proving out is that consumers will continue to spend the money they have on something somewhere, regardless of shortages.

This is a continuing example of how flush American households are with cash. In fact, the data intrigued us so much, we decided to dig a little deeper to see what is supporting such robust retail spending.

We first decided to examine generational wealth with an eye towards current and future spending power. We often hear how younger generations, like millennials, are supposedly up to their eyeballs in debt and lagging prior generations. This is important because millennials recently became the largest share of our population at almost 22%: 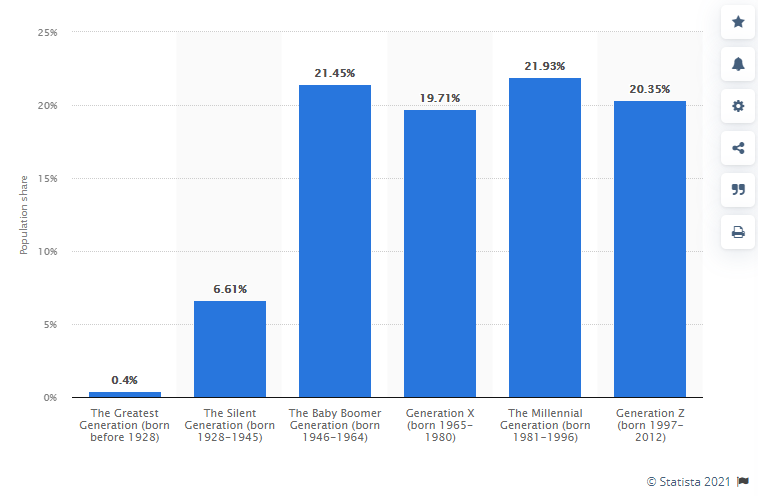 The focus of much wealth analysis seems to be who owns what share of the overall pie. As an example, in the middle of this year, baby boomers had 51.4% of all net worth, according to the Federal Reserve. On its face, that seems pretty good for a group that makes up about 21% of the U.S. population. Comparatively, millennials make up 42% of the U.S. population, but own only 5.6% of household net worth. When you look at it from that lens, it's no wonder we often hear the wealth gap between millennials and baby boomers is unfair.

The problem is that despite those facts being 100% accurate, they’re also 100% misleading.

Each generation’s share of the pie rises and eventually falls as people start out young, hit their peak earning years, pay off debt, and enjoy compounding returns on accumulated investments. For context, consider how in 1989 the silent generation owned almost 80% of all net worth, and today it stands at 14.4%.

So, instead of looking at “pie share,” we think it’s better to compare the average level of net worth for each generation as it aged from young to old in order to help determine overall economic spending power. We took each generation's total net worth, divided it by the number of households within each generation, then adjusted for inflation.

The results were surprising.

When comparing baby boomers and Generation X, we used the average age of a Gen Xer (48.75 as of the middle of this year), adjusted for inflation, and did the same for baby boomers.

Unfortunately, the data only go back to 1989, so a direct comparison of millennials to baby boomers isn’t possible. However, we can compare millennials and their growing spending power to Gen Xers.

Now, obviously not everyone is at the average. So, we wanted to look at the cash wealth of different income brackets over the last 15 months since COVID-19 started. Again, what we found was rather surprising. 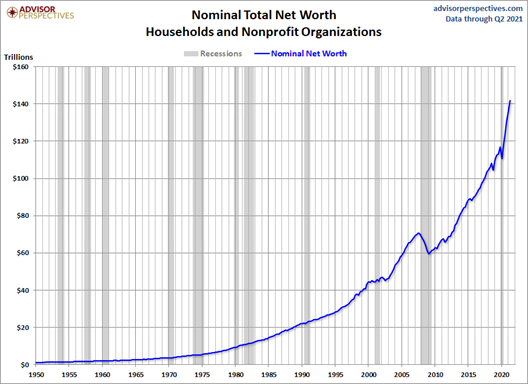 A huge rise in cash savings was a significant contributing factor to this wealth gain. The amount of cash and cash equivalents on American home balance sheets reached $16.5 trillion in the second quarter, up from $12.7 trillion at the end of 2019: 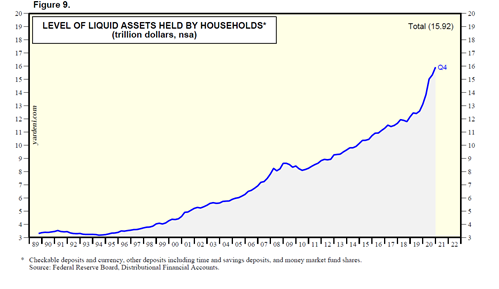 But we think the most important fact is that the bottom 50% of households, as measured by income, are holding 39% more cash than they were before the pandemic. This means American households have dry powder for more goods (i.e., retail sales) and stocks.

The data made us want to dig even further from the macrolevel that we just discussed to the microlevel to see how wealth is spread throughout all income brackets. We can't take credit for this, as the data was provided by famed economist Dr. Ed Yardeni in his September 3, 2021, blog post:

As you can see in the table, the bottom 50% is still trailing the top 1%, unsurprisingly. But comparatively, it gained liquid assets at a faster percentage rate.

When looking at this data, we’re comforted by the fact that the increase in wealth over the last 15 months has not been as concentrated on the “top percenters” as some would lead us to believe. That 39% increase for the bottom 50% income level is one of the strongest catalysts for this robust economy and the spending we're experiencing right now. It’s helping support corporate earnings, and thus, the equity market.