Forecasting the Next “100 Days” and More

There has been an extravagant amount of stimulus money sent out over the past year. About 75% of that money is being saved or used to pay down debt, according to the Federal Reserve Bank of New York. This applies to both the January and March checks.

To us that means there's plenty of spending power to fuel a continued stock market surge, as well as retail sales, which are important because we're a consumer driven economy. One of our favored economists, Ed Yardeni, did the research work for us on the percent changes in the major categories of retail sales growth over the past 12 months through the end of March: 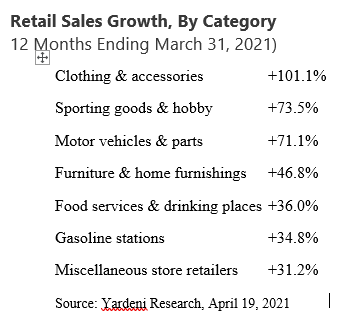 March retail sales were the biggest contributors to the blowout 6.4% gross domestic product (GDP) in the first quarter. That GDP number, plus personal consumption expenditures growth, means the consumer is on fire and has plenty of fuel left to burn. In fact, our trusty Federal Reserve Bank of Atlanta GDP Now estimate is up to an astonishing 13.6% for the second quarter (silly us thinking last quarter would be the best of the year!). Keep in mind, when reported, the actual GDP doesn’t reach GDP Now estimates, but the estimate is a valid tool because it captures actual economic data as it happens. It’s sort of a raw look at the economy and can help show what’s likely to occur in the near future. 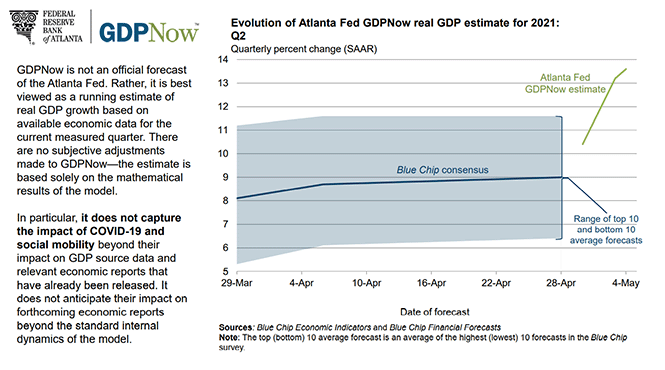 Additionally, as we’ve said before, there is still plenty of the liquidity. The broad M2 measure of money, essentially money that’s easily accessible, is up by an unprecedented $4.2 trillion year-over-year. Personal savings totaled a record $3.1 trillion in the last three months alone, and that's before accounting for the latest relief checks. In total, this equates to 75% of U.S. receipts. 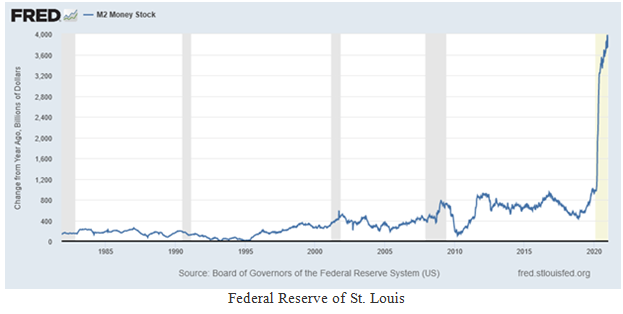 What does it all add up to? Well, Americans have $16.3 trillion socked away in the bank: 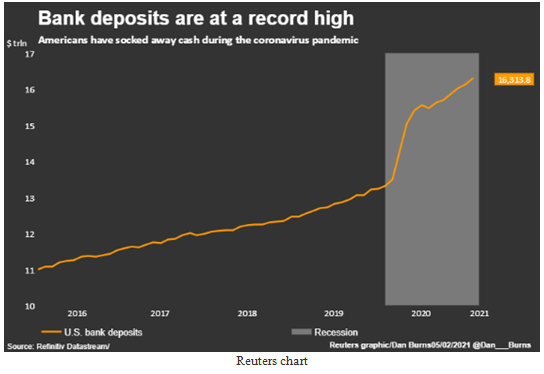 With this much money on tap, an argument can be made that we don't need to worry too much about a stock market crash in the short-term since any normal correction will most likely be met by buying support. After all, where else will our investment dollars go? Bonds aren't exactly a screaming bargain. And real estate is becoming more difficult to find in many areas.

A moderate tax increase is most likely because of “Manchin Manchin Manchin,” as in Senator Joe Manchin of West Virginia. He has publicly refused to cooperate with his party's proposed corporate tax rate increase from 21% to 28% and says that a modest increase to 25% is the most he could tolerate.

Back to history. The below Fidelity study published last month charted the years in which tax rates were increased and the S&P 500 performance that followed. As we can see, as long as tax increases are not too extreme (“Manchin Manchin Manchin”), the current worry could turn out to be somewhat overblown: 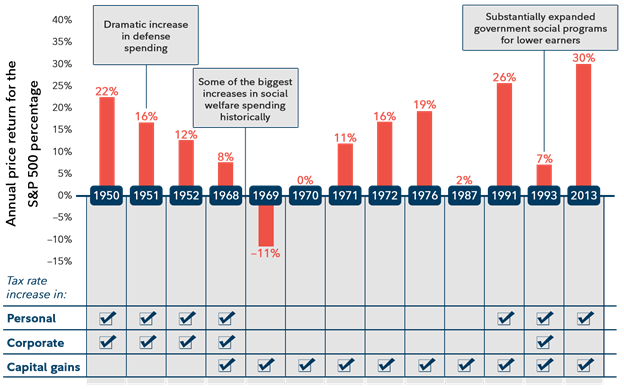 A Different Flavor of Inflation

Rising labor costs will likely push the overall consumer price index up in the coming months. And while many people have been talking about material price inflation, we believe the next inflation wave will come from labor accounts. That’s because they are a much bigger percentage of the cost of producing goods and services than even raw materials. It’s one reason 26% of small business owners have raised their average selling prices this year, the highest since 2008.

Coming out of the deep 2008-09 recession, wage pressure was subdued. But that is not the case this time around. At the end of February, 7.4 million jobs were not being filled, according to the National Federation of Independent Businesses. Among owners who are hiring, during the time of the same survey, 91% could not find any workers. In Florida, a fast-food franchise is paying applicants $50 just to interview for an entry level job offering $12.00 an hour.

What does this all mean for stocks? With President Biden’s first 100 days behind us and the month of May just beginning, it seems pretty clear to us, despite labor issues, a number of factors are playing out quite well. As such, we think there's plenty of room for the S&P 500 to run for the remainder of the year.

Now, as we all know, progress isn’t linear. Pullbacks happen. But remember, corrections are healthy.

Recently, we think most of short-term dips were the result of a strategy to sell on the earnings news, regardless of the numbers. The best example is Amazon, which finished trading in the red after hitting record high earnings, crushing first quarter estimates, and issuing above-consensus revenue guidance for the second quarter.

It seems investors were looking to book profits. That’s been the pattern of the last few weeks, starting back with investors realizing huge bank stock profits to start earnings season. But fast forward a bit and those same bank stocks are hitting new highs. This trend we’re in follows a five-week stretch in which the S&P 500 gained roughly 8% going into earnings. We believe the present market landscape is a “pause then refresh” movement during an overall bull market trend.

Again, our economy is driven by consumer spending, which accounts for 70% of GDP. In the most recent April University of Michigan poll, the Index of Consumer Sentiment increased to 88.3, up from 84.9 in March. The key takeaway from the report is a record number of consumers expect the jobless rate to decline in the year ahead (as do we), which is important as it relates to spending potential.

Another important catalyst for additional higher moves in the market is analyst expectations of double-digit earnings growth for the remaining three quarters of 2021. Looking at just the first quarter of this year, 86% of companies in the S&P 500 have reported earnings per share above estimates. If 86% is the final percentage of the quarter, it will mark the highest rate ever since FactSet began tracking this metric. Companies are reporting earnings that are 22.8% above the estimates, which is well above the five-year average of 6.9%. 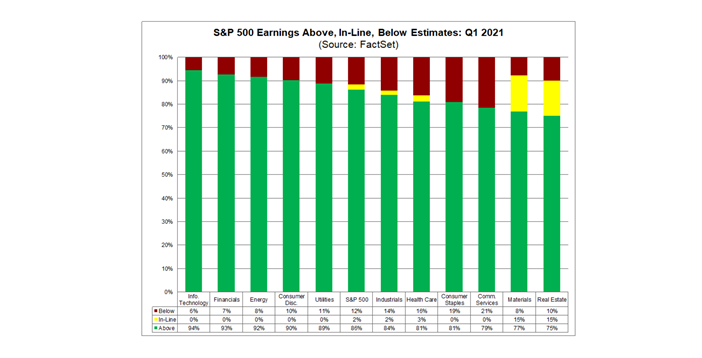 From both technical and fundamental standpoints, we believe the narrative will quickly shift from “selling the news” to “buying the dip,” especially as the tax debate takes on more clarity in the coming months. This thesis is also supported by MAPSignals’ trusty Big Money Index (BMI), where despite the recent choppy markets, institutional investor data is still on the rise as the BMI just ripped up to 77.4%: 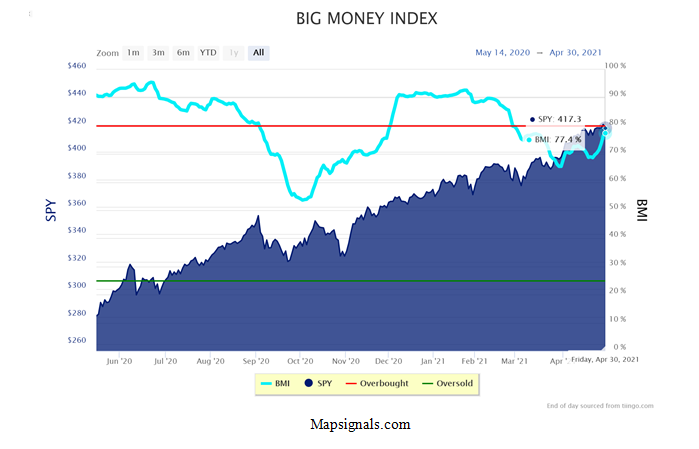 Our thesis is further supported by “big money” buying focused on real estate, materials, industrials, financials, and discretionary, which as we all know, are reopening, cyclical, strong economic sectors:

Obviously, if the data change, our opinion will as well. But as we sit, none of the factors we’ve discussed are bearish. We're seeing a rising BMI, buying of infrastructure and reopening stocks, and virtually no selling to speak of in the market.

As long as no black swans show up, it seems to be green lights ahead.