According to data released last week, U.S. real gross domestic product for the first quarter of this year was down 4.8 percent, which blew away the 3.9 percent estimated decline.

We’re now in the second quarter of the year, and things are only going to get worse.

While this is going on, we’re also seeing record unemployment claims, prompting expectations of an unemployment rate somewhere near 20 percent. That means one of every 5 workers will be jobless, which is more than double the number of unemployed workers during the peak of the Great Recession.

All that said, please don’t depart for your emergency bunker. While none of the news above is good, it’s also not a surprise to investors. None of it is shocking. Investors knew this was coming.

Instead, the focus needs to be on how quickly we’ll recover, which is the great unknown.

We’ve mentioned this before – recovery depends on ending lockdowns, COVID-19’s severity going forward, therapy development (which looks promising), and ultimately, a timeline for a vaccine. The varying opinions on all these factors is what creates the real uncertainty for investors. 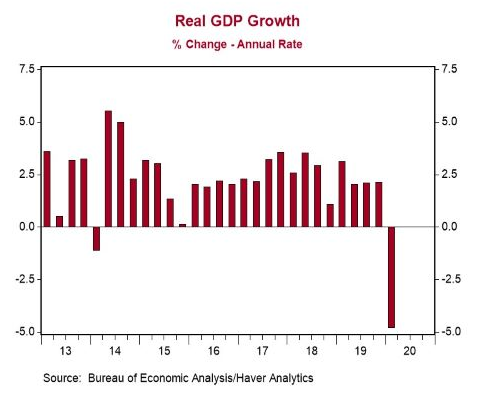 Looking strictly at recent market performance, it seems the market has already factored in all the worst news and is eyeing significant economic recovery in the second half of this year.

Right now, we believe it’s difficult to make such a projection with any certainty.

The loss of economic output and consumer spending will be huge. Real GDP in 2020 will likely be down 5 percent from 2019, when prior to COVID-19, it probably would’ve been 2.5 percent higher.

Additionally, federal revenue will be down, the effects of which will be compounded by an increase in our federal deficit. The Congressional Budget Office updated its forecast to reflect a $3.7 trillion budget shortfall, which is roughly 18 percent of estimated fiscal year GDP.

To put that in perspective, our budget deficit hit 9.8 percent of GDP in 2009, during the last financial crisis. The deficit-to-GDP ratio peaked in 1942 when it stood at 29.6 percent.

Again, all of this is already known. So, what do investors need to focus on going forward? We think two datasets in an entire world of micro high frequency data sets are worth monitoring.

First, on the macro-side, we want to pay attention to unemployment claims. We’re looking for a peak in continuing claims, which would signal the bottom of a recession.

Second, we’re monitoring the daily government receipts for payroll taxes. Right now, they’re down about 10 percent from a year ago. We’re waiting for that year-over-year comparison to hit bottom, which would signal a “less bad” situation and suggest a bottom. 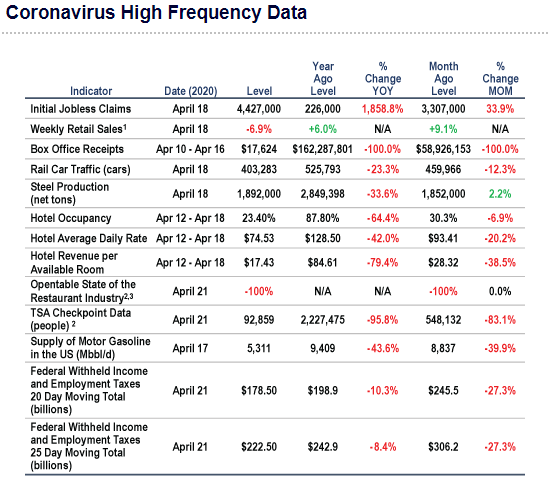 This information, along with technical market data, will guide our decision making. Using a mix of market and economic data gives us a good idea of where things are really at right now.

We’re particularly watching buy/sell data to see when buying will resume in full force. As the table indicates, progress is being made, though we have a long way to go still.