Our readers know we’ve warned of interest rate risks in 2022 because of inflationary pressures. Now that the market seems to see it as well, we think the news media is doing its usual job of getting people upset for the sake of attention.

But remember, we get myopic when measuring markets by limited time frames like a week or a month. Also keep in mind that everything is relative from a global perspective.

Let’s step back and look at the data. That will help us realize that things aren’t as bad as some make them seem. In fact, there are some compounding factors that we think could mean economic growth ahead.

When you zoom out using the charts below from Yardeni Research, going back to the birth of the last major bull market on March 9, 2019, we can see from a relative basis that the U.S. is significantly ahead: 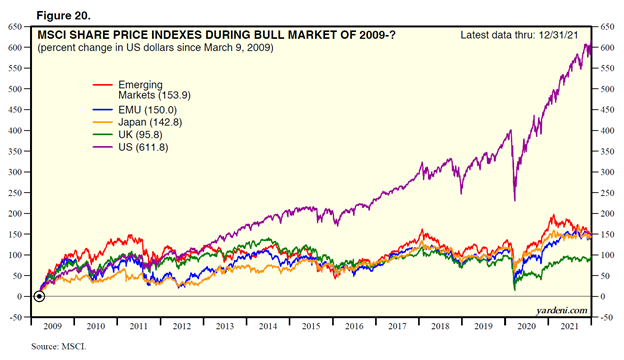 We point this out because even the Federal Reserve previously pointed out the data. It said the U.S. economy is “really strong,” and “consumer demand is very strong,” as well as “incomes are very strong.”

All that is true, especially in comparison to the other major economies in the world, which is good news.

That brings us to the mystery of the reportedly weak jobs report. There were a couple more significantly positive numbers released earlier in the week that paint a much more complete picture of the job market. That is, many of the “missing” American workers are beginning to return to work.

On Jan. 4, the Department of Labor announced the number of job openings in the U.S. decreased by more than half a million in November 2021, down to 10.562 million. That figure was well below the expected gain to 11.075 million. Essentially there was a gap of 1 million between actual and expected job openings. 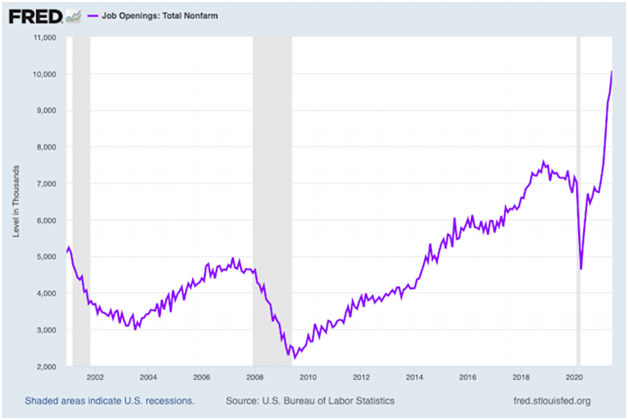 But looking at different data tells a different story.

Payroll processor ADP issues jobs reports as well. These reports differ from the governmental reports, which tend to lag the labor market, because they’re much closer to real-time. Essentially, ADP is processing payroll for the new hires soon after starting, whereas the Labor Department reports use older data.

So, here’s a second piece of good news. When the government released its figure of 199,000 new jobs, the ADP report said private payrolls increased by 807,000 in December 2021.

That’s a 4X difference in reported job growth. Where is that gap coming from? The discrepancy is the data lag. ADP has real-time data, the government doesn’t.

Plus, while the unemployment rate only counts for those looking for work, a more comprehensive measure of unemployment that includes discouraged workers and those holding part-time jobs for economic reasons fell to 7.3% last month, down from 7.7%. That’s a huge, positive drop.

All this real-time data supports the thesis that America is getting back to work and normalizing in 2022.

Now what we need to know is whether the bond market has adjusted enough from an interest rate risk standpoint to take a wait-and-see approach on further economic and earnings data (remember, earnings season is starting). To begin to illustrate this, the following table of global 10-year sovereign yields shows the U.S. is paying considerably more already than most developed nations. Shockingly, the U.S. pays even more than Italy and Greece: 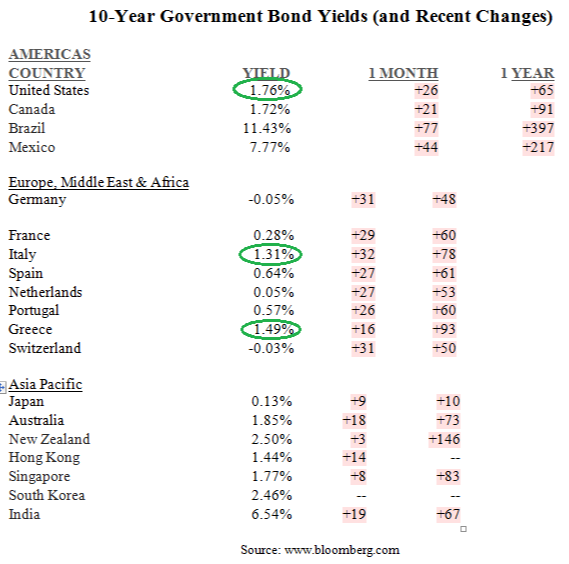 One of the reasons that’s important is because it leads to significant inflows from international investors and sovereign nations. That puts an artificial “cap” under 10-year Treasury yields, even when the Fed increases interest rates.

The consistency you should pay attention to on the bond table above is the one-month change across the spectrum of global rates – they’re all pushing higher, even with inflationary pressures. That’s also due to future growth prospects. This data clears a way for synchronous global economic prosperity.

This all lays the groundwork for what we really want to see under the surface within equity markets to start the year. While the cap-weighted S&P 500 was down 2.9% from its all-time high and the NASDAQ was off 7.8% from its all-time high, the Invesco S&P 500 Equal Weight ETF (RSP) is down just 1.9% on the year (as of this writing). The equal-weight index has less reliance on tech and more strength across the energy, materials, industrial, and financial sectors: 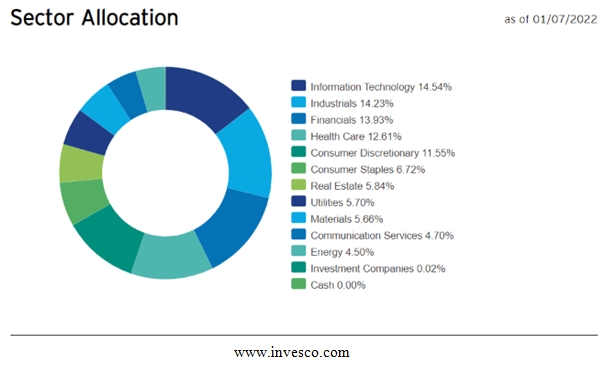 While the media places too much emphasis on huge technology stocks, this equal-weight performance indicates some highly bullish developments taking place within specific sectors that are better attuned to an economy where growth is accelerating, not decelerating. This implies a healthy, cyclical economic trend.

We can see that in data from our trusty friends at MAPsignals. Their sector rankings chart shows big buying in energy, financials, staples, industrials, and materials:

To summarize, the global synchronization of interest rates increasing isn’t just reflecting higher inflation, but also expectations of continued cyclical growth. That should lead to a market behaving as it should from a rotation standpoint. That’s unlike what we saw in 2020 and 2021. Perhaps we’re returning to fundamentals winning out, as they have over time.

According to MAPsignals’ Big Money Index (BMI), which is a measure of institutional investor activity, money is flowing significantly into stocks so far this year, yet the market is dipping (and tech is getting killed): 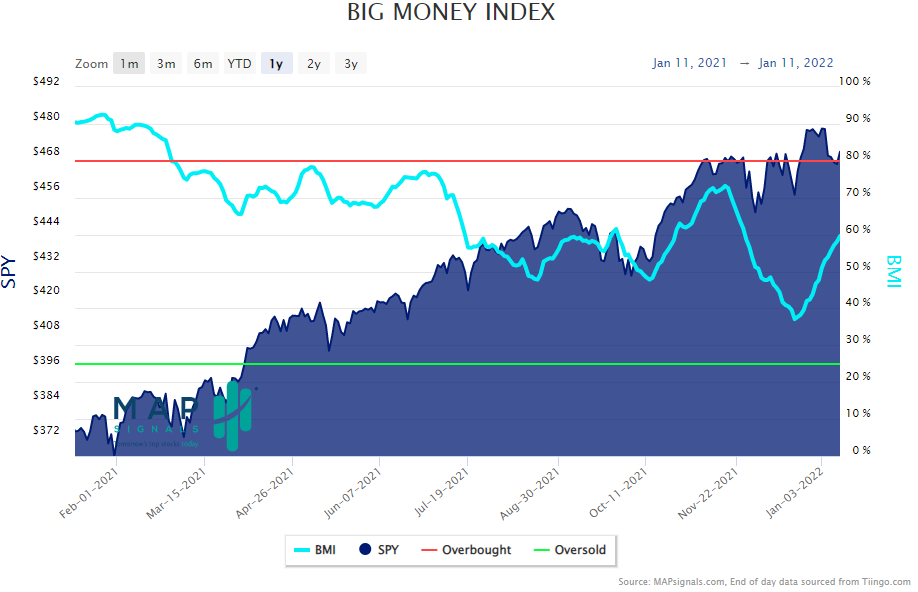 This scenario confuses investors and makes them uneasy. So, when will the tech selloff end? Based on the data and fundamentals, we think we have a pretty good idea.

As you can see in the charts below, 2022’s mixed start saw financials, energy, and industrials getting bought, while tech and healthcare were sold:

Using this data, as well as some of our daily data, we can have an answer to whether tech stocks will continue to crash. What's important to note is that when selling spikes, it often coincides with market bottoms. When zooming in in the technology sector, two Fridays ago there were zero tech buys (no blue bar on right side of chart): 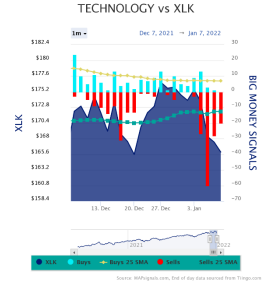 What happens with tech stocks after there are zero tech buys? Our friends at MAPsignals have an interesting answer: 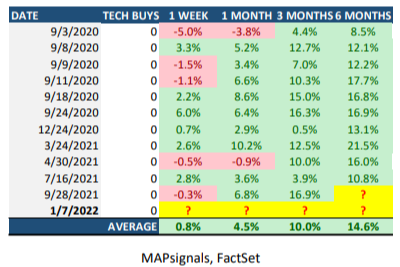 Where does all this leave us? Nobody really knows. However, we know that the tech slaughter won't last forever. And the data laid out above indicates that a bounce is near, or maybe even here.

The Fed will be increasing rates. This seems to be a certainty. Along those lines, it’s probably a safe assumption that the Fed will not risk economic catastrophe to battle inflation by raising rates too high, too quickly.

Even if rates hypothetically rose a full 2% this year, which is highly unlikely, they would still be near historic lows. The chart below shows where we are now and how a 2% hike would only get us back to where we were in 2019:

Keep in mind, earnings season is about to start in full force. We are very likely going to see strong (perhaps record-breaking) profits. That, in concert with everything else mentioned in this post, will further support the fundamental case we’ve laid out for multiple economic factors compounding to achieve growth.

All told, data and narratives are colliding again. And as usual, we’ll side with the data.