Avoiding the Double-Dip and Seeking Opportunity

Let’s start with some good news – the double dip recession so many feared in the fourth quarter of 2020 didn't occur, and it doesn't look like it will happen in 2021 either. Yes, renewed shutdowns starting in November finally hit retail sales and employment, especially in small businesses. But much of the economy, like manufacturing output and housing, kept growing.

Oddly enough, the much-delayed stimulus that didn’t pass until the end of December will now likely lift the economy in the first quarter, when it needs it more. This growth is in essence being “borrowed” from the future, but that doesn't change the current numbers or data.

Before we look back at the end of 2020, currently we believe this additional stimulus, deficit spending on vaccines, and warmer weather should boost real gross domestic product (GDP) in 2021 to somewhere around 4.0 percent. To recap, a much-feared double dip recession doesn’t seem to be occurring; instead, we expect solid economic growth ahead.

Once the final numbers come out in a couple weeks, we project real GDP will have grown at a 5.2 percent annual rate in the fourth quarter. While impressive, that still leaves real GDP 2.2 percent less than where it was a year ago. Here’s how we calculate the growth across six major areas:

Cars and light truck sales rose 20.9 percent annually in the fourth quarter. Inflation-adjusted retail sales outside the auto sector declined at a 2.6 percent annual rate. Combined, we estimate an increase of 3.2 percent annually, which would add 2.2 points to real GDP.

Residential construction continued to expand rapidly in the fourth quarter, hitting its highest level since 2007, and we see no stop to this trend. We’re estimating home building growth to hit a 32-percent annual rate in the fourth quarter. If correct, that will boost real GDP by 1.3 points.

We estimate federal purchases grew at a 1.0-percent annual rate to end 2020. That would add 0.2 points to the real GDP growth total.

Corporate inventories appear to have grown for the first time since 2019. Given the prolonged contraction, inventories are poised to make a notable real GDP contribution in 2021. But as of now, we think inventories will add 0.8 points to real GDP growth last quarter.

Add all that up and we get 5.2-percent annualized real GDP growth in the fourth quarter of 2020.

To start the year, Cornerstone rebalanced its portfolios, which is consistent with our quarterly rebalance policy. Some perceive rebalancing as selling “winners” to buy “losers.” But if you broaden the time horizon enough, all asset classes are winners and losers at various points (and nobody knows exactly when). Thus, rebalancing maintains a strategically diversified portfolio, allowing investors to capitalize when “losers” start to win again.

Our most recent rebalance ushered in many questions about finding value in the current market. One common method for potentially exploiting opportunities in times like these is simply to buy areas or subsectors of the market that were beaten up the most and wait for them to turn. It’s a form of rebalancing. This strategy worked well in 2020 and there are certain areas we think have the same potential for 2021.

Large Not Always in Charge

The first potential opportunity is in small- and mid-cap equities. Even with history on their side, it’s often difficult to convince investors to allocate a sizable percentage of their capital earmarked for equities to small- and mid-cap stocks. From 1926-2019 the S&P 500 index posted an average annual return of 10.2 percent while the Ibbotson Small Company Stock Index returned 11.91 percent annually, on average.

To us, that’s a solid risk-reward relationship. But the continued underperformance (until recently) and investor underweighting provides a strong go-forward investment thesis.

To further exemplify investors’ typical “hatred” for small- and mid-cap stocks, this chart shows the U.S. large-cap categories held a combined $8.36 trillion in assets compared to $1.21 trillion for mid-caps and $0.88 trillion for small-cap stocks: 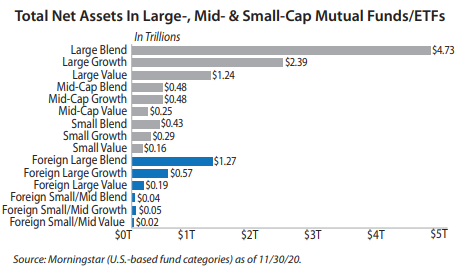 The clear momentum growth and the fact that many equity investors have been significantly underweight offer a stronger risk/reward profile for small- and mid-cap equities than in the previous ten years. It’s part of Cornerstone’s reasoning for incrementally increasing exposure to these markets since the end of last year.

The second area that could be ripe for growth is emerging markets. Over the last decade, a persistent question has been how much foreign equity exposure is optimal for U.S. investors. Understandably, the question changes over time, as does the answer. The below table of cumulative returns shows how it’s mostly been all U.S. since the end of 2010, when the leadership role in the global equity marketplace shifted from the emerging markets. 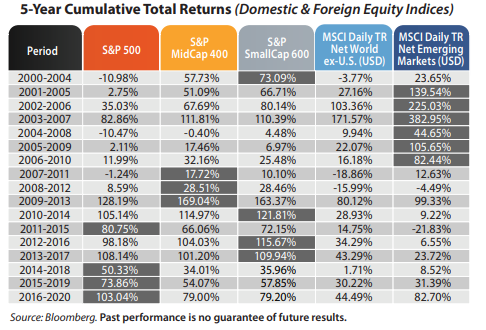 But since we know that outperformance can entail multiyear runs, we wonder if we're seeing a catalyst that will bring emerging markets back to the forefront of investors’ minds. One reason is we believe the influence the U.S. dollar can have on emerging market performance is significant. A weaker U.S. dollar will often significantly boost returns for American investors holding positions in foreign securities, and vice versa. We’ve already seen the dollar index recently decline 6.69 percent to a reading of 89.94, which is just slightly below the 20-year average of 89.99: 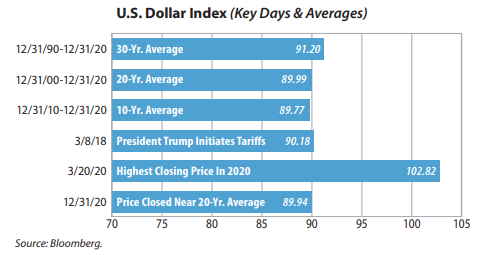 The expectation that the U.S. dollar could continue to decline from its long-term average would further advance the leadership role of some foreign stocks. As such, a portion of Cornerstone’s exposure to emerging markets has increased. To be sure, we will be closely watching this situation unfold.

Every now and again (certainly more recently), clients ask whether an investment in gold would complement or detract from their portfolios. While the below historical comparison of gold versus stocks significantly favors stock investments over the past 30 years, there are other aspects to consider. 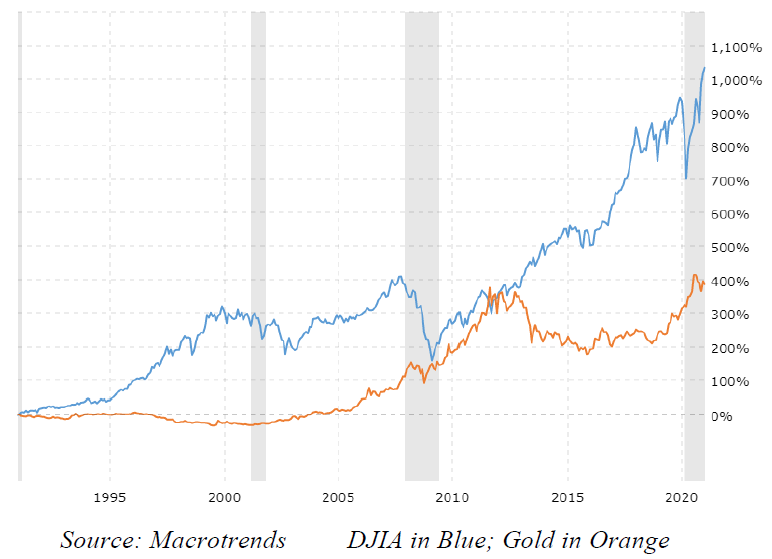 The first is that gold is a single commodity and thus lacks an important aspect of any long-term investment strategy – diversification. In our opinion, if you're looking to participate in an expected commodity rally because of inflation risk, as a hedge, or for any other reason, a portfolio of metals is a much more diversified and less risky option.

Secondly, gold's value is based on supply and demand. Don’t forget, stock portfolios can be designed to achieve a variety of objectives and align with current sociopolitical, economic, and market conditions. But gold one has just objective: appreciation.

The last point about gold, and it’s the one that isn’t talked about enough, is its marketing. A huge part of the interest in gold is due to the massive amounts of advertisements on TV, radio, and elsewhere to put gold into your savings or retirement accounts. These marketing efforts are paid for by firms that make a profit off investors from selling gold in the form of bars or coins.

Conversely, notice that there are few (if any) advertisements to buy individual stocks. Why is this? It’s because the marketing and sales of gold and related products as an investment is not regulated.

Cornerstone isn’t anti-gold. It certainly can have its place in a strategically diversified portfolio. But the key is strategy, because with gold, it’s the Wild West out there.