An Unknown Way Forward for a Transformed Workforce

For some time, employment data have improved. We often view them on a weekly or monthly basis, analyzing sectors and trends. As of late, the positive movement is clear.

But rarely do we look at longer timeframes. And even more seldom do we dig deeper to see the people comprising the numbers.

If you think about it, it’s incredible the U.S. has absorbed an additional 100 million people into the workforce over the past 60 years. Three big surges have contributed to this influx.

The first was the baby-boom generation. It entered the workforce starting in 1954 and enjoyed peak working years from 1986-2011.

And third, the entrance of women into the workforce on a mass scale. In the jobs report ending December 2019, women workers outnumbered men in employee roles for the first time ever.

From 1950-2000, women added 47.2 million new jobs to the economy versus 32.7 million for men. Clearly, women workers have transformed our economy.

In the 1970s, women began going to college on an equal basis with men in the U.S. By the early 1980s, women earned parity with men in terms of academic degrees. And by 2000, female degree earners surpassed males by a wide margin.

As a result, women professionals are prominent in almost every industry. And if things continue, it will be every industry, top to bottom. 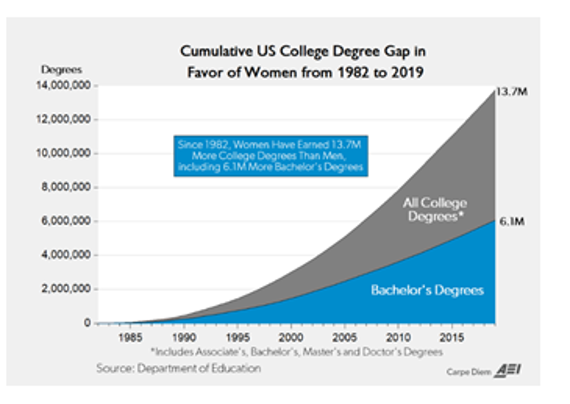 We point all this out because these waves of new workers are the ultimate resource for our economy. Without them, we would not be as prosperous. For example, Japan had no immigrant wave or baby boom. Those are major reasons for the country’s economic stagnation over the last 30 years.

Overall, the world is having fewer children. That isn’t an issue now. But it could be in 15-20 years, when a sustained low birth rate will slow down the wave of new worker capital.

This leaves a big question. How will we spur our economy’s growth like women and immigrants in the U.S. have over recent decades?