American Oil is Changing the Game

Various factors can influence the price of oil, including (but not limited to):

But when it comes to today’s oil industry, the real focus is the production battle between the U.S. and OPEC. And as you can see from the chart below, the U.S. is making a lot of headway in the production race. 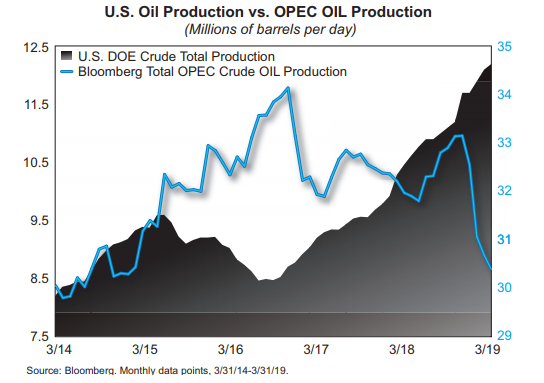 As you can imagine, OPEC is not too pleased about this – our energy dependence is their economic lifeblood.

In fact, the group steadily increased production from 2014-16. We believe it was done to engage in a price war with the U.S. because of our newfound energy independence and the potential of our vast resources. By increasing production, OPEC hoped to drive down oil prices and shut down new drilling projects that would become unprofitable as a result.

The reason this is a big deal is because energy independence significantly increases our political clout and leverage worldwide because we don’t need to buy oil from anywhere else.

Yes, the price war caused some short-term pain. However, American oil producers withstood it. And in the process, we flipped the script when it comes to energy independence and the accompanying resulting political influence.