Our readers know how we often cite the Big Money Index (BMI) from our friends at MAPsignals. It’s a datapoint that tracks “big money” investment activity via a 25-day moving average of buys and sells. Well, it recently crossed the rare oversold threshold, resulting from seven straight losing weeks.

Almost immediately the S&P 500 immediately bounced with a vengeance, rising 6.6% a couple weeks ago. The bounce coincided with the release of the Federal Reserve's favorite inflation indicator, the personal consumption expenditures price index or PCE, which measures prices we pay in the U.S. for goods and services. The most recent report shows a slight dip in prices, eliciting hopes that inflation has peaked, though it was only a 0.3% decrease from March to April.

Most of the decrease resulted from the prices of goods falling, even though services prices increased. But that didn't seem to dent that week’s animal spirits and neither did the lower-than-forecasted University of Michigan Index of Consumer Sentiment for May, which fell to 58.4. The May 2021 reading was 82.9, which puts into focus the significant inflation worries weighing on consumers: 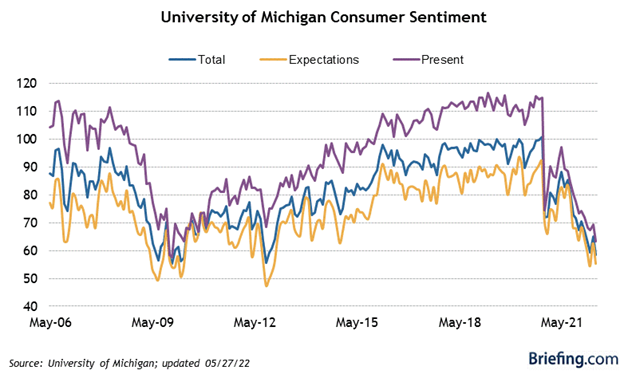 While the market cheered the lower PCE number, it's important we also note that there was a fall in the personal savings rate as a percentage of disposable income, dropping to 4.4% in April from 5.0% in March. For perspective, the 4.4% personal savings rate is the lowest since September 2008: 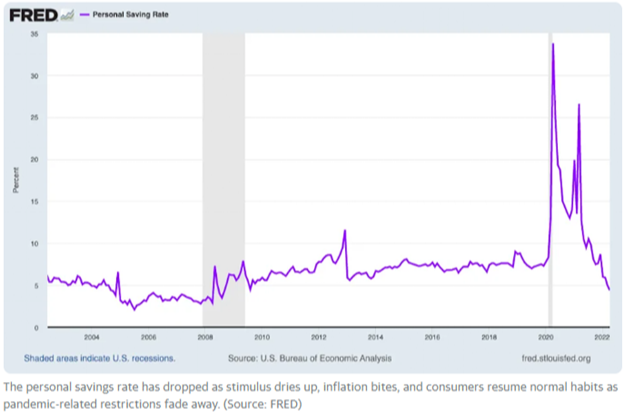 However, many economists are quick to point out the decline comes after an unnatural spike in excess savings from the stimulus checks in 2020. We’re finally seeing the impact of those start to wear off. That might help explain why consumers keep spending and the stock market didn't flinch (yet) at the decline in savings rates.

Still, rising inflation is certainly having a negative effect on household borrowing. For instance, consumer debt and credit rose 1.7% in the first quarter. We must keep a close eye on this datapoint because as interest rates move up, higher debt levels will be sticky.

Everything I just mentioned highlights our risk concerns. We’ll continue monitoring them.

But also know there’s a bullish narrative right now. It assumes our economy can withstand the current inflation because of abundant jobs and higher wages fueling growth. The idea is that we’ll hold steady until inflation cools later this year and into 2023.

This could yet play out. However, a hinderance for the bulls is a fresh round of employment slowdowns, especially in the technology sector. The fact that several leading companies have slowed or frozen hiring is concerning. Again, we’ll continue monitoring this situation.

With all that being said, it doesn't hurt to be happy about how much ground the S&P 500 made up that last week of May. The swift rise helped erase all the month’s losses, as the index closed around 4,158: 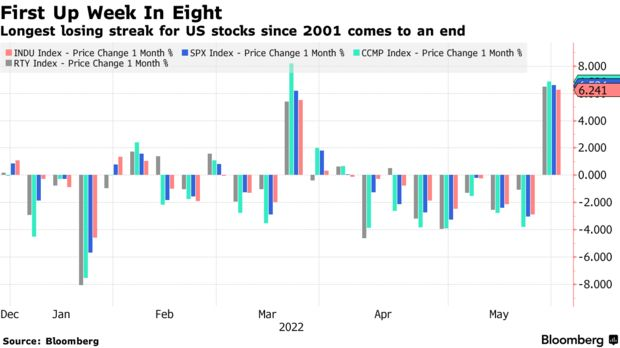 So, there is optimism that’s overriding the upcoming reduction in the Fed’s balance sheet. Consider too that energy and commodities are trading at highs and investors want to buy great companies at depressed prices under the premise that the market has priced in peak inflation and a mild economic slowdown.

But as we sit here today, with so many crosscurrents, trying to make a call on where markets overall will go is tough. We’d argue it’s almost a coin toss. And when the market could go up or down, it means it may be fairly valued.

That said, there are companies being richly rewarded by these inflationary pressures. There’s also an abundance of companies reporting strong sales and offering good future profit guidance that are still trading at discounts, especially those with extremely attractive yields and continued dividend upside. In essence, it’s an individual stock market right now where certain companies can thrive, while the situation is murkier for the broader markets.

Closing out this analysis, we want to revisit the trusty BMI.

It went oversold, dipping below 25% on the morning of May 25, 2022. That indicates much more “big money” flowing out of the market via selling than flowing in via buying. Since then, we've seen a quick bounce back, as the BMI rallied to 32% as of this writing: 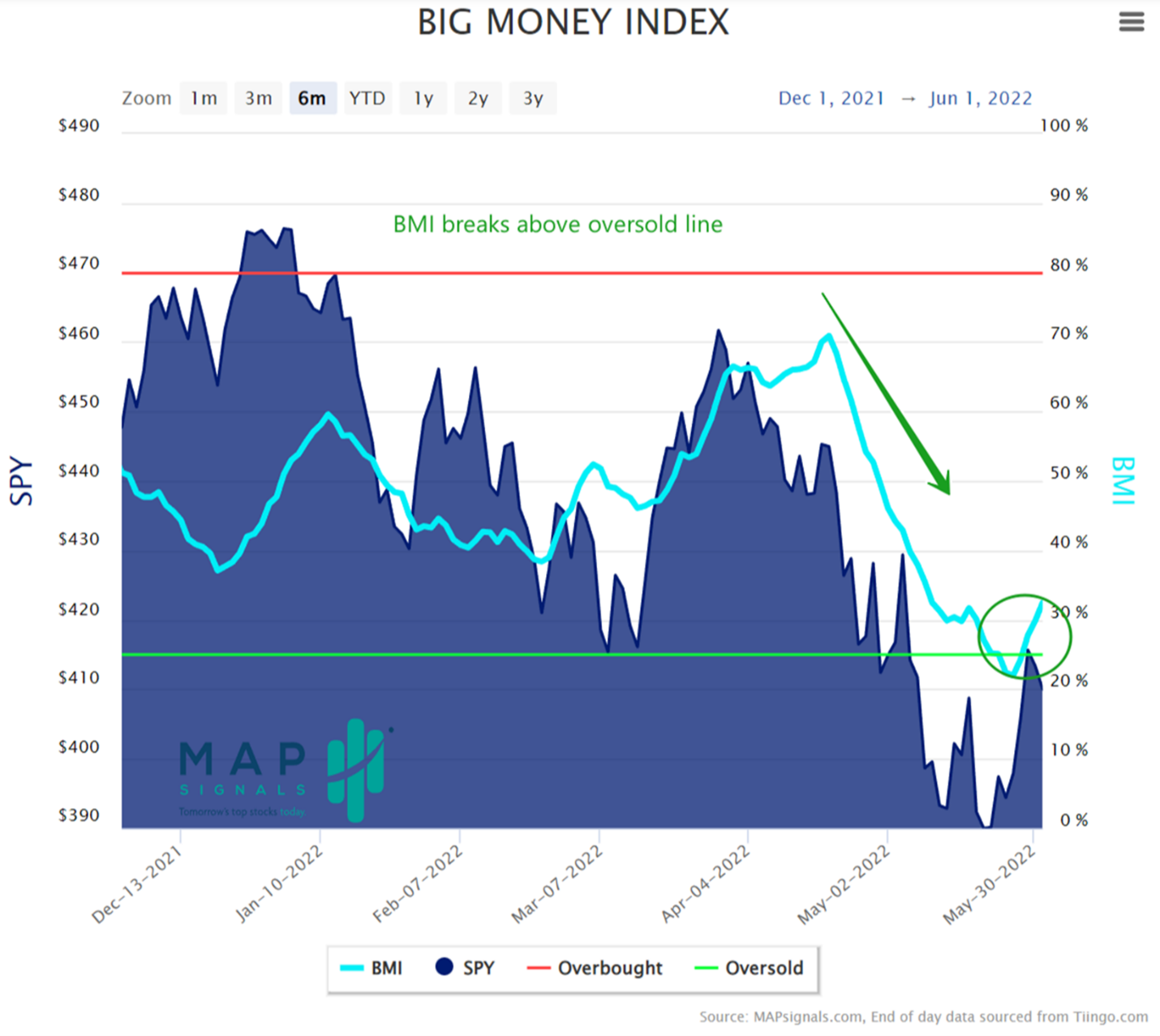 A quick-rising BMI like this tells us either the buyers are back, or the massive selling slowed. In this instance, it's the latter. In the chart below, you can see how selling has more or less vanished since May 24 and the BMI subsequently jumped: 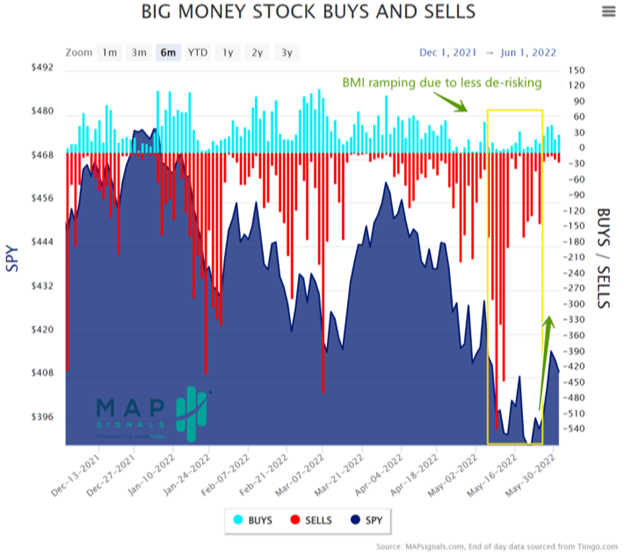 What we witnessed, was a lack-of-selling-induced “relief rally.” But we'll need more data to continue to flow through before buyers show up. That’s what will really boost both the BMI and the broader market for more than just the short term.