We’ve analyzed in recent posts about how the market might be affected by different political scenarios. Taxes and regulations are important issues that drive (or hinder) economic growth. And in the future, we’ll cover more of these issues leading up to the election.

But today I want to take the opportunity to answer questions we at Cornerstone hear almost every day, especially recently.

Is the stock market’s rise since March normal?

The short answer is no. None of this is normal.

It’s not normal for the S&P 500 to decline 35 percent in a little over a month. It’s also not normal for it to advance 60 percent from that low in just five months, especially without a customary 10-percent correction, as we normally see.

The decline and subsequent rise are abnormal, both in terms of scale and timing.

Where is all the capital coming from?

This is a common follow-up question. If we’re in the midst of the worst recession since the Great Depression, how can there be so much capital dedicated to markets?

The Federal Reserve. The central bank’s response has been exceptionally fast and of unrivaled magnitude.

The Fed’s balance sheet was $4.17 trillion coming into 2020. It’s peaked this year (so far) at $7.17 trillion. In other words, $3 trillion in electronic financial firepower was directly injected into the financial system.

How so? How does that happen?

As Fed Chairman Jerome Powell said in a 60 Minutes interview, “We print it digitally.” He then explained how it’s done through buying Treasury bills and bonds, which increases the money supply.

The Fed has never done this before. Even more abnormal, it’s enlisted a private money management firm – Blackrock, the largest U.S. asset manager – to be its official custodian and facilitator of these trades.

Everything is paid for with electronic credits from the Fed, which go directly to Blackrock. These newly minted dollars then go into an asset, not just sit dormant in a money market fund. Some credits go into bonds, and some undoubtedly go into the most liquid of stocks (i.e., mega caps), which keeps markets levitating.

While we’re sure the market looks forward to a COVID-19 vaccine, it’s also getting unprecedented help from the Fed and the U.S. Treasury during the wait. Remember, this is the first recession ever where personal income rose, though it’s mostly due to extra loan guarantees and unemployment benefits. 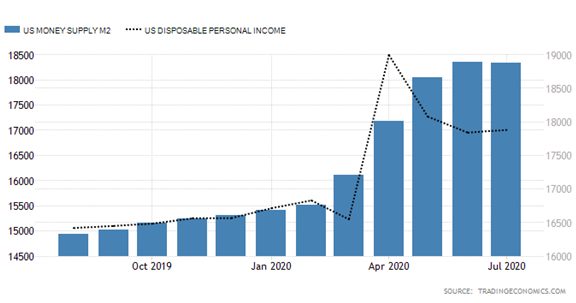 So, are these market jumps artificial?

This is the natural follow-up question. We hear it not just about equities, but about real estate too. The inquiry makes sense, but the answer is complicated.

The simplest explanation is central banks have a role in the economy overall and these institutions feel their policies are necessary to prevent a second Great Depression. This has resulted in deficit spending levels not seen since World War II.

This policy seems to be a page from the World War II playbook in that the Fed hopes to merely inflate away the debts from COVID-19, much as it did with the war debt. That means we’d have a booming economy with negative real interest rates that are artificially held below the level of inflation.

Although we saw double-digit inflation spikes after World War II, it shouldn’t be as high now because of our digital economy. However, it will definitely be higher than what we’ve been used to over the last decade because those rates have been manufactured to be below historical averages.

Banging your head against the wall trying to understand the fundamentals and technical data of this market is somewhat unnecessary right now because of central bank intervention. It reinforces the famous phrase, “Don’t fight the Fed.”

It also calls back to the beginning of this post – none of this is normal.

As usual, we’re keeping track of the latest high frequency economic activity and COVID-19 data via the charts below. Thankfully, there are still plenty of green shoots economically and continued positive downward trends in the health situation. 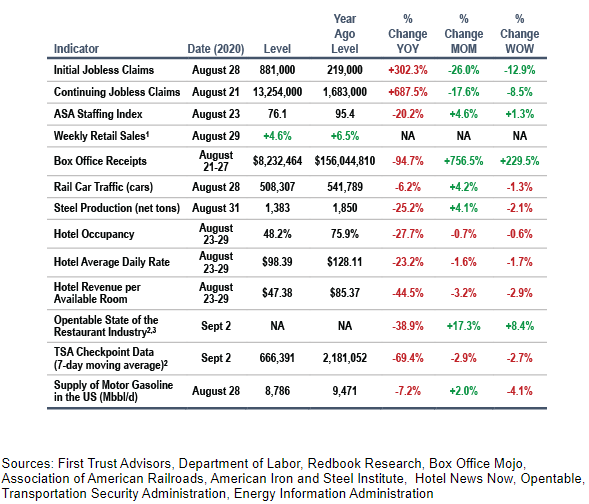 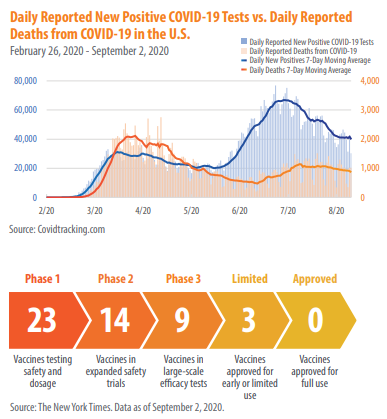 Internally, we figured our original forecast was obsolete and readjusted to 3,100. As the S&P 500 blew past that, we revised again to 3,350. That benchmark was surpassed as well, so now we’re going back to our original projection of 3,650.

Our partner research team’s market forecast model is based on capitalized profits. With that model using second quarter corporate profit data from this year, which were down 20.1 percent from 2019, and keeping in mind low interest rates, it says the S&P 500 is fairly valued at 4,052, potentially creating more room to run.

Of course, Black Swans could change all of that (again).

A piece of important economic information from last week is the Institute for Supply Management’s business barometer. It rose to 56.0, beating consensus estimates of 54.8, which means consumer and manufacturing sectors are heading in a positive direction (anything higher than 50 signals expansion).

This index is vital to our overall recovery. Seeing it head upward is a good sign.

While most coverage of COVID-19 focuses on a vaccine, we’ve long thought the development of testing and therapeutics was more important for getting back to normal and driving COVID-19 back. Well, big progress has been made on that front.

Quick, accurate testing is what can get us back travelling, going to events, back to school, eating out, and so on. It can help provide virus containment in a safe, accurate manner. If we have 50 million tests available by October, this would be a big breakthrough for economic growth.

Not much has changed on the market front, though we are in September, which is historically the worst month for equities. You’ll hear several reasons to sell come December – COVID-19, the flu, elections, and so on – but historically that is a mistake, based on this chart: 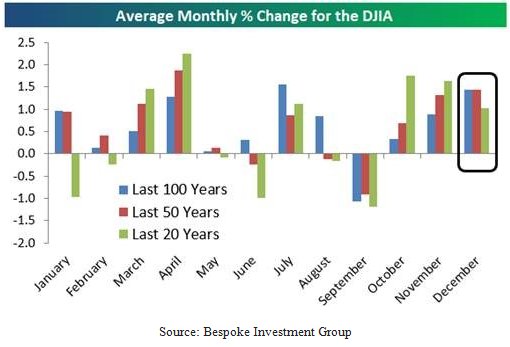 In addition, when viewing Map Signals’ trusty Big Money Index (BMI), markets have showed renewed vigor the past couple of weeks. While the rolling average on the BMI started to slow, last weeks data showed buying as actually starting to pick up again. If that continues, the BMI rolling average should move upwards, although we saw a significant uptick in selling going into the holiday weekend last week cause a two day sell off.  But overall, it helps that there’s been hardly any selling since April until the end of last week:

Additionally, after seeing Technology sector buying slow some, we’ve seen it come back in a big way.  Although again, the last two days of last week saw a significant uptick in selling in tech as money rotated into cyclical sectors including Discretionary, Industrials, and Staples. The Discretionary and Industrials buying is especially notable as those sectors tend to include travel and other “real world” stocks that indicate a return to normal life under the benefit of a vaccine or rapid testing.  The market pullback at the end of last week could be the air being let out from this historically long overbought scenario we have been in and warned about.  If so, that will create a good buying opportunity for our portfolios to use the remaining 8-10% cash we have been holding onto.

As it pertains to markets right now, taking out fundamentals and technical analysis, we follow a simple rule – don’t fight the big money, and the Fed is the biggest money around.