Inflation. It’s on the rise and on everyone’s minds. It’s been on ours for a while too. We follow inflation closely because it could be a big risk on investment portfolios, retirement income, and spending power. Despite the big rises, the Federal Reserve continues to call this inflation “transitory,” though the definition of transitory is still yet to be determined!

With that in mind, we want to address the Consumer Price Index (CPI), which is a common inflation benchmark, that was released last week. It continued to accelerate in June, rising at the fastest pace in more than a decade, with the CPI pushed to a 12-month increase of 5.4%. The June-specific increase was 0.9%, which comes after jumps of 0.8% in April and 0.6% in May, respectively.

These latest data bring the three-month change to an annual rate of 9.7%. Some economists say this is just a return to normal, with current price jumps offsetting declines in 2020. But to put this in perspective, consumer prices are now up 3.5% annualized since February 2020, which was before the pandemic: 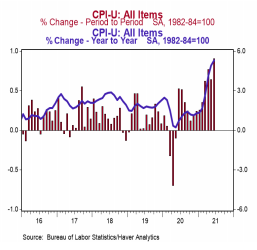 Drilling down a little bit on core prices, which exclude food and energy, they’re up 3.1% annualized since February 2020. Also, it’s important to note the biggest culprit in the higher June CPI was used car and truck prices, which were up 10.5%, the largest jump on record since 1953. To be clear, that's not an annualized increase, it’s a 10.5% jump in one month (used vehicle prices are up 41.3% over the last two years). That increase alone accounted for about half of the overall core CPI increase.

Additionally, food prices rose 0.8%, mostly due to meat, poultry, fish and eggs. Those four products increased 2.5% in price. Still, if you strip out the typically volatile food and energy categories, core prices increased overall 0.9%, which ties for largest monthly increase since 1982: 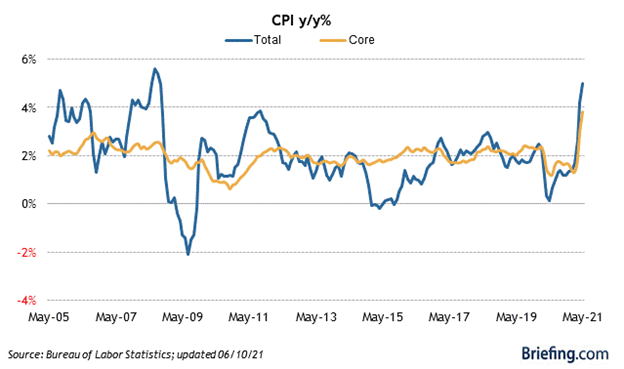 We believe this continues to highlight the supply chain issues facing many industries that came from mandated shutdowns and generous unemployment benefits.

As mentioned, the Fed said last Wednesday these price increases are transitory. But again, what is the definition of “transitory”? We think it’s the Fed’s way of saying there's still no need to change monetary policy.

But in our opinion, math always wins. And math says inflation above the Fed’s 2% target is likely to be with us for some time. This must be considered as we head into 2022.

Despite Inflation, It’s an Undervalued Market

Many are convinced a U.S. stock market correction, or even a bear market, is inevitable due to the inflation numbers and “stretched” price-to-earnings ratios. But even two weeks ago, when the market dropped by 1.6% on July 8, the S&P 500 rebounded to an all-time high the next day.

To be clear, this does not mean that the market always goes up. And it doesn't mean that inflation and our debt relative to gross domestic product (GDP) could not create future problems. But remember, we don't try to time the market. We focus on fundamentals like profits and interest rates. And even with the inflationary risk, we still believe the S&P 500 is undervalued.

Now the S&P 500 is just 3% away from our target. But we’re standing pat with our full-year projection.

The main reason is we don't want to leave the impression that we’re traders shifting our target over and over. We’re long-term investors and it’s the long term that matters. In addition, the U.S. stock market has been undervalued relative to our capitalized profit models profit model since 2009.

To refresh your memory, our capitalized profits model takes the government's measure of economy-wide profits from GDP reports and discounts them by the 10-year Treasury note yield to calculate fair value. As we stand today, if we use the 10-year treasury yield of 1.36% (as of July 9’s close) to discount profits only from the first quarter, then our model suggests the S&P 500 is 45% undervalued. With profits likely to grow more than 20% this year still, the fair value will rise more as the year unfolds, inflation or not.

Right now, the Fed is artificially holding interest rates down across the yield curve. So, to be conservative, we need to estimate fair value at elevated 10-year Treasury yields. If we use 2.0%, this gives us a fair value for the S&P 500 of 5,240. To put this in perspective, we would need a 10-year Treasury yield of 2.4% in our model to show the current stock market is trading at fair value with no increase in second quarter profits.

We fully understand that current monetary policy is inflationary, and that government spending has lifted U.S. federal debt above 100% of GDP. These policies could shift economic growth and the level of interest rates in our estimate of fair value stocks in the years ahead. But for the foreseeable future (i.e., the remainder of 2021), reopening, easy money, and deficit spending are all pushing economic growth and bigger profits.

Thus, we maintain our bullishness for the remainder of the year because our model indicates stocks are undervalued. And even if we’re potentially off on our year-end S&P 500 target of 4,500, it’s more likely we’ll be too low, rather than too high.