We’ve written before how there are times to be opportunistic in the market. One such time is when irrational fear leads to excessive selling. This is when otherwise good stocks are caught in the selling wave, depressing their value artificially. History tells us quality recovers.

We thought the last few weeks or so of the year may provide such an opportunity. However, things moved at breakneck speed, and the market seems to have flipped from red to green already, with the bulls ready to run.

Understandably, this created some volatile trading sessions in the recent past. And as we discussed last week, the volatility was fear-driven, based off some investors’ worries about the Omicron variant and the Federal Reserve speeding up the pace of quantitative easing and rate hikes.

What quickly became obvious was that the stock market decided the economic pain associated with those fears would come sooner rather than later. Specifically, regarding the Fed, a theory becoming more prominent is that the central bank will finish tapering as early as March 2022. That is consistent with the new expectation from the futures market that the federal funds rate will price in two or three rate hikes in 2022, an expectation with which we agree.

We've felt all along that absorbing this new “economic pain” earlier rather than later is a better option as part of the recovery, especially in light of increasingly non-transitory inflation going forward. That means the longer the Fed waits to address this, the harder it will be to stop.

Early last week we think the market began to agree with this stance as there was a traumatic and unforeseen reversal in the indexes as well as the buying underneath the market. That supports our theory that the economy can handle both the faster taper and earlier rate hike(s).

So, What Just Happened?

Simply put, the market rebounded fast and aggressive. Investors waiting for “the bottom” to start buying may have missed it in the blink of an eye.

While we typically concentrate on institutional investment flow, we came across an interesting piece of information in our research into the quick and dramatic market reversal.  Retail investors poured a record $10 billion into stocks over the week of the Omicron variant scare and the same retail investors dumped another $2.2 billion into U.S. equities the week Jerome Powell called for an acceleration of tapering.  As you can see in the chart below, the power of the retail investor in today’s investment world is real and continues to “buy the dip”. 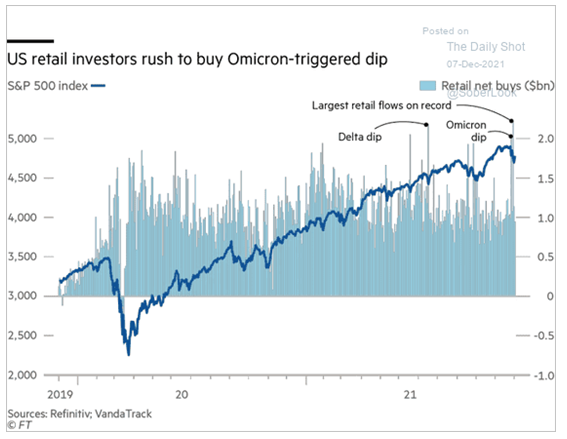 Additionally, as you can see in the following two charts from our trusty friends at MAPsignals, a research firm that tracks “big money” investor activity, the “big money” buy signals from both stocks and exchange traded funds (ETFs) last Monday and Tuesday were some of the most dramatic reversals from selling to buying that we've seen since we started tracking this data (especially in stocks): 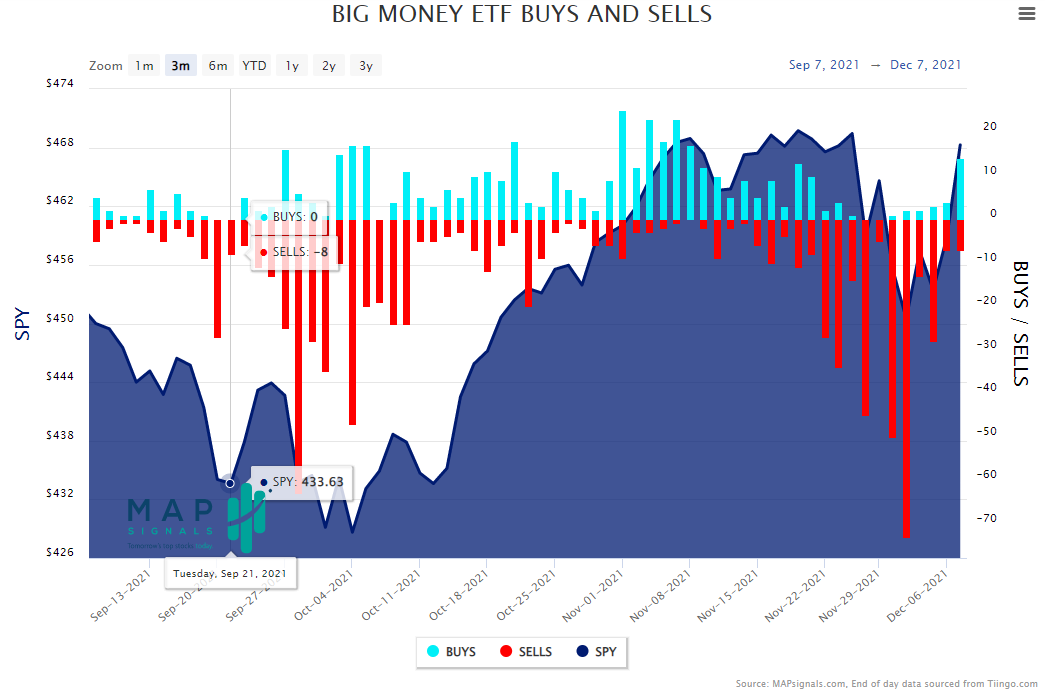 The selling was fear-driven, but the abnormal thing was the extreme reversal arriving so quickly from both “big money” and retail investors. To put this into perspective, it becomes even more apparent of how extreme this situation was when we look at the previous week and how ugly the selling was. We saw the most selling since the March 2020 pandemic began: 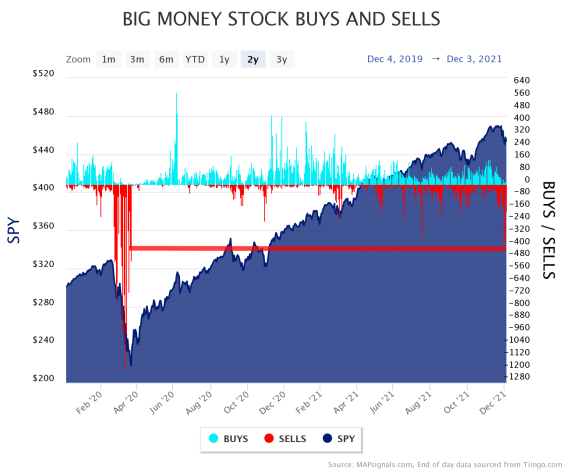 To drill down and give you an idea, let's look at the sector rankings. Normally, some sectors rise while some fall. But in this table, everything got pounded:

Every sector saw 25% or more of it stocks get sold. This is important because when we see something like this, capitulation is usually near. However, we never would have expected it was so close.

So, here are two important reminders about when MAPsignals’ Big Money Index, a tracker of institutional investor activity, approaches oversold territory due to such extreme selling:

In other words, despite all the talk and fear of economic freezes, global lockdowns, Fed tightening, payroll reports, and so on, the data made it quite apparent that it was a great time to buy stocks.

This bullish position is supported by the 10-year Treasury yield too. Remember dividends are taxed at a lower rate than bonds. And as of last week, investors would have 24% more money in their pockets owning dividend-paying stocks versus bonds:

All these things combined to scream, “BUY STOCKS!” And that doesn't take even consider how, according to FactSet, the S&P 500 estimated earnings growth rate for the fourth quarter of 2021 is now at 20.9%, which would be the fourth straight quarter of +20%. That estimation provides additional support that there's a good chance that Q4 will lead to another quarter of S&P 500 companies beating their quarterly estimates by more than the five-year average of 76.6%: 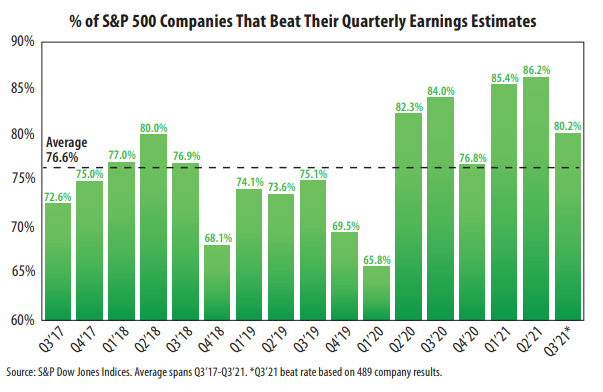 While slowing growth fears, inflation, potential Fed tightening, and Omicron may have spooked investors’ fear gauge, they quickly let that fear subside. It’s seemingly been replaced with fundamental data and facts. Even though the change was rapid, it’s a good thing in our book.

I’d like to end this post with a quick programming note. As we get into the end of the year, the next couple blog posts will get into our expectations for 2022. We’ll also cover some new sectors we think will take advantage of the current stage of the economic recovery cycle. Until then, invest well!