New COVID-19 cases have created uncertainty from an economic standpoint. As a result, investors are leery.

Not surprisingly, markets fell recently – but not because of the virus. It was because of the fear of more government-mandated, economy-killing lockdowns.

Exemplifying this is the seven-day moving average of new daily COVID-19 cases. It bottomed on June 9 at 21,282. Since then, cases have increased to 39,662 per day as of May 26. That’s an 86 percent increase in only 19 days. Some of the new cases are due to more testing, but not all of them.

Either way, while cases have increased, we must keep in mind that deaths from the virus have not jumped. According to data from Worldometer, in the seven days ending May 28, COVID-19 deaths averaged 596 per day nationwide. That’s the lowest rate since March and down almost 75 deaths per day from the April peak. 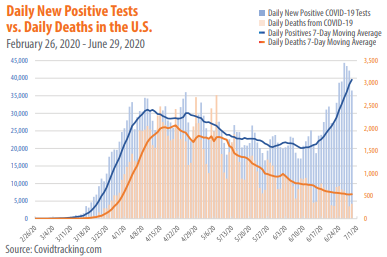 We attribute this to younger people catching COVID-19 and medical professionals learning a lot more about treatment. As we said a couple weeks ago, more cases can be handled as long as hospitalizations and deaths don’t jump, which they haven’t, thankfully.

Although some states and cities have imposed density limitations, we highly doubt April’s broad restrictions will return. Social distancing may slow the spread, but it can’t completely stop it. To their credit, people and businesses are adapting.

Pfizer’s vaccine candidate has successfully passed the first two trial stages with 100 percent efficacy on test subjects and increased antibody levels relative to COVID-19 survivors. If it endures the full trial process, 100 million doses could be ready this year, with another 1.2 billion next year.

While new cases are up, more important public health metrics are not showing danger signs. Couple that with promising treatment developments, and it helps keep everything in perspective.

Also, despite this “surge” in new cases, high frequency data like airline passengers continue to show good things. This week, there were 9 percent more fliers than last week. Other data show similar gains: 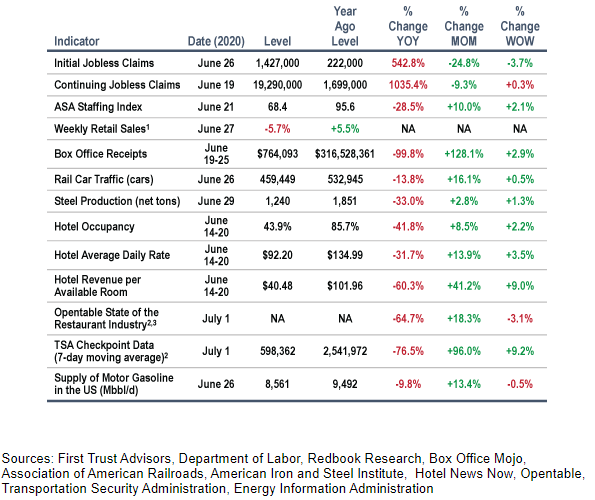 We must also note the strong June unemployment report.

The consensus estimate was 3 million new non-farm jobs created in June. We thought 3.4 million non-farm jobs would be created, resulting in a 12.5 percent unemployment rate.

Well, we were all way off. The June report showed 4.8 million new non-farm jobs, lowering the unemployment rate to 11.1 percent, which is great economic news.

We’ve all studied Newton’s third law of motion – for every action there is an equal and opposite reaction. And if one force is larger than the other, we get motion.

It’s the same in buying and selling stocks.

For example, if there’s huge buying in stocks and exchange traded funds like a few weeks ago, the motion makes markets rise. If the buying stops, we’d expect indexes to drift higher until an opposing force pulls things the other way.

Applying that to Map Signals’ trusty Big Money Index (BMI), look at January 2020 in the below chart (the left green circle). The yellow line marched upwards as buying propelled the market higher. Suddenly it started to fall as sellers arrived. An opposite force caused contrary motion (selling instead of buying). 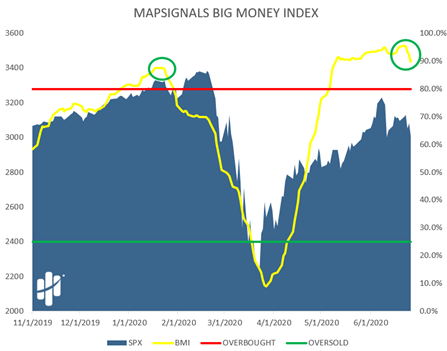 Nearly six months later, we have a similar setup. The BMI has started to stall, then fall, as we can see in the right green circle. Newton’s law is kicking in again. There’s more volatility, and logic would dictate the market is way overbought.

As we’ve discussed before, it could mean more near-term downside. But don’t fear that because it creates buying opportunities. The sellers are starting to show up, and it’s been a while – almost three months according to this chart: 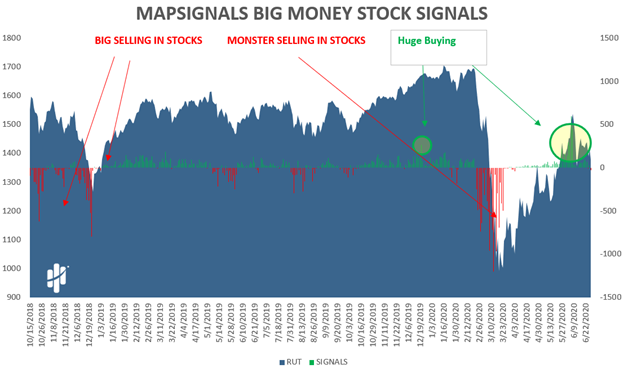 Weeks ago, we saw record buying. It’s since petered out. And we’re now just starting to see selling (the red tick inside the green circle) as big-money sellers are starting to overcome the nonstop buying: 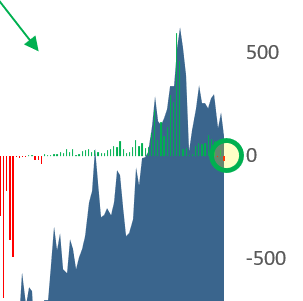 The reds and greens come in waves. They’re small at first, but then intensify. The flows tell us what’s likely coming next by hinting at a turning tide. In this case, history tells us lower equity prices could be just over the ridge, meaning a great buying opportunity.

But the opportunities aren’t limited to equity markets.

Credit markets, especially the high yield marketplace, are usually a few steps ahead of the equity markets. June offered some optimal entry points when high yield bond spreads were at levels greater than 600 basis points.

Empirically, we can evaluate how investors fare historically when entering the credit market under similar circumstances (high bond spreads relative to their long-term averages). There have been 10 similar occurrences prior to the COVID-19 pandemic where high yield bond spreads ended a month with greater than a 600-basis point difference.

Using these as purchase points, the 12-month holding period that followed provided an average return of 9.27 percent and a median return of 10.71 percent. Additionally, in none of those 10 cases would an investor have experienced a loss: 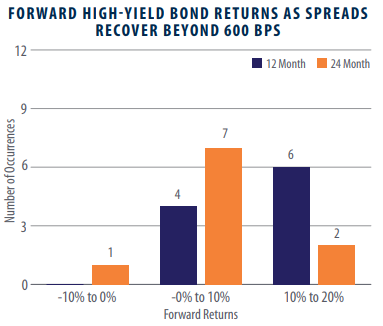