Caution About Our Future Must Balance Today’s Needed Repairs

The wrath of COVID-19 is still unfolding, and each day seems to bring something new.

Thankfully, there have been positive recent developments on several fronts. But there have also been unprecedented actions that, while needed in these times, could prove troublesome if left unchecked down the road.

One of the most important facets of the market currently is selling pressure. If everybody kept selling as they have for much of the past month, values would consistently decrease. Thankfully, the pressure is starting to be relieved.

The below comparison shows the table from last week’s post on top and more recent data on the bottom. Look at the yellow columns; all the selling percentages have dropped, which is a clear sign of the epic sell-off slowing. Also noteworthy in the bottom table is the information technology sector – it’s basically normal, which is encouraging. 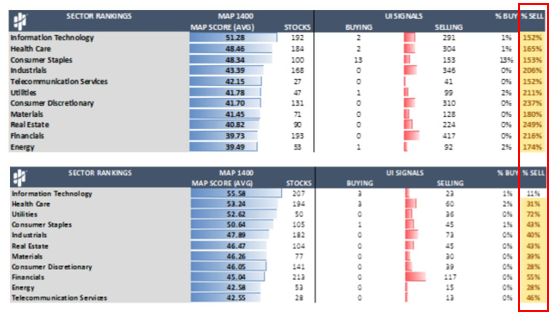 It’s key to understand that the readings in those tables are still extreme relative to historical values. However, the trend towards more normal market activity is welcome.

Our opinion all along has been that the market recovery will not be V-shaped, as some have suggested, but rather W-shaped, meaning there will be peaks and valleys before rising upwards in full force. Over the last two weeks or so, there have been sharp bounces, causing some to say it’s the bottom and implicitly implying there’s nowhere to go but up. 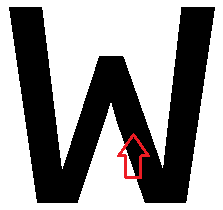 We partly attribute the recent rises to the clarity provided by phase three of the federal stimulus package, which importantly targets main street businesses and families. Another reason for the jumps is quarter-end fund window dressing and forced rebalancing, which has created significant “robo-buying” by algorithmic-based investment funds.

Our feeling is we’re in the middle section of the W right now and there could be further declines ahead. As more bad health news is released over the next few weeks, we think more selling could occur before economic activity picks up again.

Of course, there will be volatility during a crisis. The VIX Index, a volatility data point we’ve referenced, is still high, but it’s starting to return to normal levels. That said, technical indicators showed both bull market conditions and bear market conditions last month, which is the first time that’s ever happened.

As far as the five points we covered regarding reinvesting in the market, two of the boxes have more or less been checked – federal stimulus and lessened selling pressure. We’ll continue to monitor developments to determine strategy over the short- and medium-terms (the upcoming weeks up to nine months away), outside of our usual quarterly asset allocation rebalancing, which we initiated April 1.

We’ve never felt drastic economic impact like this before. As a result, Congress and President Trump signed a stimulus bill that provides much-needed relief in the form of:

These efforts will support businesses and families across the country. That includes companies large and small, hospitals, schools, as well as state and local governments, all of whom need help right now.

But while this is a necessary measure, the federal budget deficit will further deepen as a result.

Before COVID-19, we were looking at a federal budget deficit of $1.4 trillion. It could now easily be $2.5 trillion without any other major spending, though big, costly ideas are already on the table. Since World War II, the largest deficit-to-GDP ratio was 9.8 percent in 2009. If we hit a $2.5 trillion deficit this year, it will be about 11 percent of GDP.

The longer these debt issues persist, the greater the long-term risk of atrophy for businesses across the country. That’s why it’s critical these temporary extensions of government powers be reined in at some point and not be made permanent.

If not, there could be significant inflation combined with losses of intangible capital and internal knowledge from small businesses that wouldn’t be able to survive persistent, slower economic growth because of exorbitant debt-to-GDP ratios. The outcome would almost surely be an erosion of future living standards relative to our normal position.

We bring this up because such economic effects will hold major influence over our viewpoints. If the economy returns to a “normal” that is less than previous standards, it will undoubtedly affect our views on equity and debt markets over the next couple years and perhaps up to the next decade.