I suspect if you asked the average investor about their investments, most wouldn't have much of a clue as to the risk, the concentration, or maybe even the actual holdings within their portfolios.  This makes them passengers, which isn’t necessarily a bad thing. One can only hope they picked safe drivers, especially when investing makes for a bumpy ride.

At Cornerstone we know patience is the best course, even though being patient isn’t always the easiest thing for humans to do. So, we need to dig into data to provide a sort of “roadmap” that provides a clearer perspective. It helps us know when to pump the brakes (i.e., be patient) versus when it’s full steam ahead.

As our readers know, MAPSignals’ Big Money Index (BMI) is one of our key data points. It’s a measure of institutional investor activity (“big money”) showing what the largest investors in the game are doing at any given time. The BMI tends to be a leading indicator of what the market will do in the future. It’s an important gauge because institutional investors are the deep undercurrent that really makes markets move, whereas smaller investors are more like reactionary waves at the surface.

The BMI has two key threshold points. One is when it’s “overbought,” meaning prices and volumes are high due to a prevalence of buying. Think of this as a “yellow light” situation where markets are frothy, caution is wise, and the brakes may soon be needed. The other threshold is when the BMI is “oversold,” which is the opposite circumstance – prices are low as sells vastly outweigh buys. These situations are open roads, though as we’ll note shortly, it can be hard to press the throttle given the context.

That’s not to say these are the only times for investment activity. On the contrary, regular investing (regardless of market conditions) is a path to wealth. Besides, most of the time the BMI hovers between the “overbought” and “oversold” markers. Thus, the course it takes is noteworthy and can foreshadow upcoming market activity.

The BMI is currently rising, which bodes well for future stock prices. This was to be expected as a forecasted high-flying earnings season unfolds – some say it could be one of the best ever. We even started to see this change going back to the beginning of the second quarter, which is why we decided to front run earnings season in our quarterly allocations.

Now, let’s see why the BMI says stocks are on the rise. The chart below of the BMI’s 30-year history naturally doesn’t reveal much at first glance. So, we dug into the data for our readers – we did the math, so you don’t have to.

Those oversold instances are golden tickets, but they’re infrequent and short-lived. The historical BMI chart shows it’s wise to pounce on such opportunities. However, it’s not always easy, as these oversold moments are usually chaotic and fraught with fear, uncertainty, and doubt. Recent ones include the COVID-19 pandemic (circa March 2020), the sudden market drop in late 2018, and the 2008-09 financial crisis.

But just because the BMI is rising, should we expect stock prices to go up too? It would make sense as big money rushes into stocks, prices should increase, on balance.

What we found fascinating is how for more than 31 years, the BMI rose on 47 percent of trading days (3,706 days), which is less than half. And most eye-catching is that on two of every three BMI up days, the S&P 500 also rose. In contrast, the BMI has fallen 53 percent of all trading days in its history. When that occurred, the S&P 500 index fell 58 percent of the time too.

Using this historical data, let’s now review 2021. As of this writing, the BMI only spent 25 of 67 days rising (37 percent), which is below average. But it’s rising now. And as it rises, we can reasonably expect that nearly 70 percent of the time, stocks will rise as well. 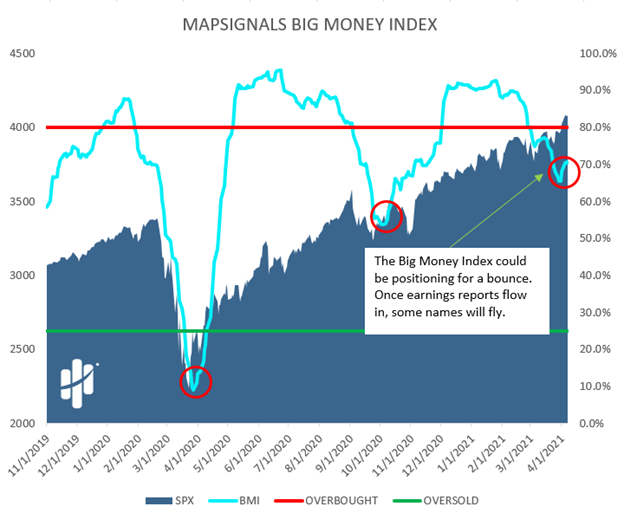 Before listening to skeptics who counter by saying indexes usually go up, take something into account. The S&P 500 rose only 53.5 percent of the time during the BMI era. Those are decent odds for a casino, but not for investing. However, a 70-percent chance – when the BMI and stocks are rising in unison – is a great market opportunity.

And that's where we are right now.

Additionally, we're seeing green shoots of increased buying in both individual stocks and exchange traded funds (ETFs), which are both bullish indicators as we go into earnings season. It indicates higher highs are likely coming: 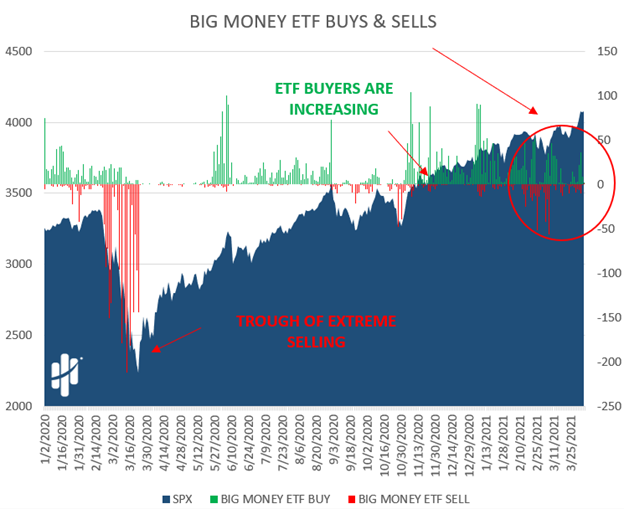 Still, nothing is certain. That said, using BMI history as a guide along with the current increases in ETF and individual stock buying, our base case is it’s time to be bullish. The light is turning green.